WhatsApp Dark mode is finally official for both Android and iPhone devices, nearly a year after testing its presence in beta. Unlike offering a pure black and white colour scheme, the Facebook-owned company has designed a dark grey background along with elements in an off-white colour to cut down the glare and improve contrast and readability. Users on Android 10 and iOS 13 will be able to experience WhatsApp Dark mode by enabling the dark mode from the system settings of their devices. However, users on older Android and iOS versions will be required to manually enable dark mode by going through the theme preferences of the WhatsApp app.

The Dark mode on WhatsApp is aimed to minimise eye fatigue and “use colours that are closer to the system defaults on iPhone and Android respectively” — instead of showing simply pure black and white colour tones. 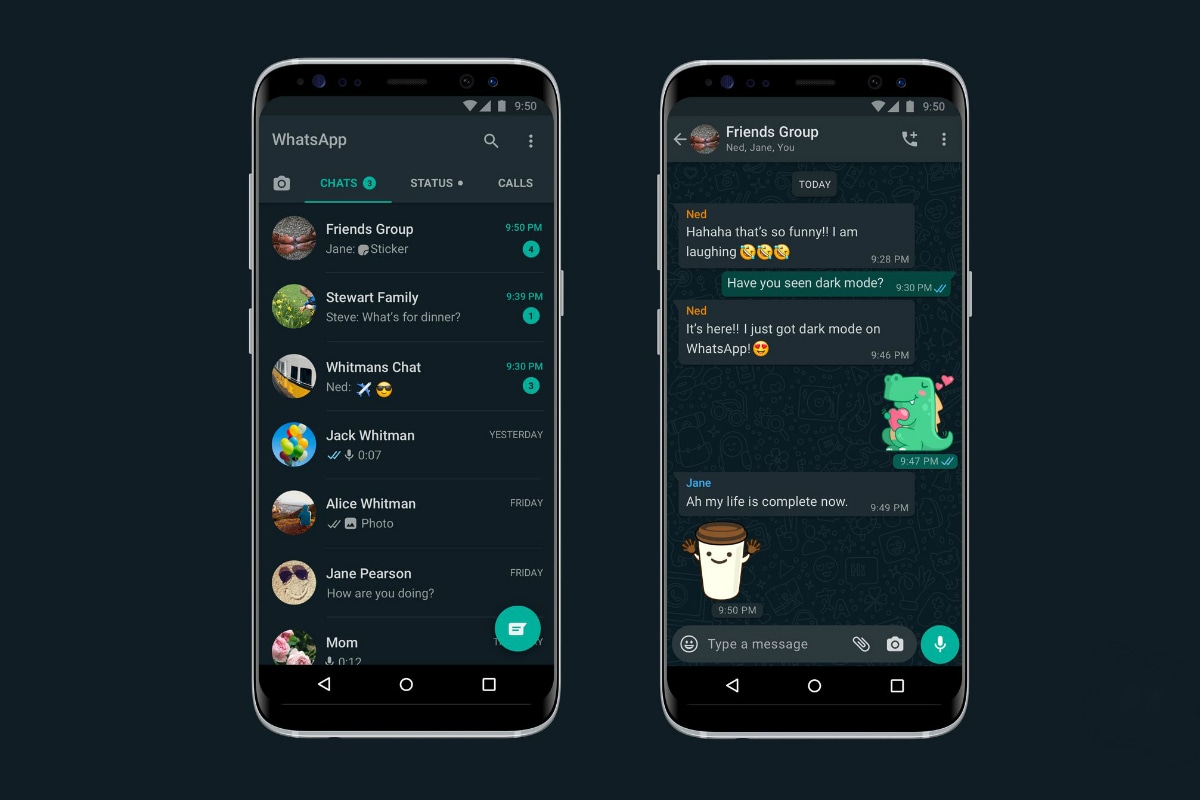 WhatsApp has been working on the Dark mode for quite some time. If we look at past reports, the feature has been in the works at least since March last year — months before the official debut of iOS 13 that brought a system-wide dark mode to iPhone and iPod touch models. Some recent beta updates also suggested the latest experience. Moreover, WhatsApp recently updated its profile photos across all its social media channels to tease the arrival of the highly anticipated change.

The WhatsApp team focussed on readability of content and information hierarchy while working on the new update, as elaborated in a blog post. The key objective that the company wanted to achieve was to help users focus their attention on each screen on WhatsApp when using the Dark mode. It was gained by using colour and other design elements in line with the Dark mode.

To give a glimpse at how the Dark mode works and how to use it in your daily schedule, the WhatsApp team has created a video titled “Hello Darkness” that features a soundtrack by previously-unreleased version of The Sound of Silence by American musician Paul Simon.

WhatsApp users on Android 10 and iOS 13 will be able use the newly added dark mode by switching to the system-wide dark mode from the device settings. On Android 9 Pie and earlier versions, the new experience will be enabled by going to WhatsApp Settings > Chats > Theme > Dark. It is, however, worth pointing out that the new experience won’t be provided to iPhone users on an iOS version prior to iOS 13.

That being said, the dark mode on WhatsApp is rolling out to all eligible users in the coming days through the latest version of WhatsApp.

WhatsApp is notably not the first app to bring a dedicated dark mode. Apps such as Twitter, Gmail, and Facebook’s Instagram have a similar experience for a while.

Moreover, the presence of the Dark mode on WhatsApp would help enhance the usage of the app that has over two billion users worldwide. The new mode would let users access WhatsApp more often than before — while in bed or sitting in a room that has dim lights. This is in contrast to the digital detox initiatives that tech companies have been taking of late to reduce screen time of users and help them improve their social interaction in the physical world.