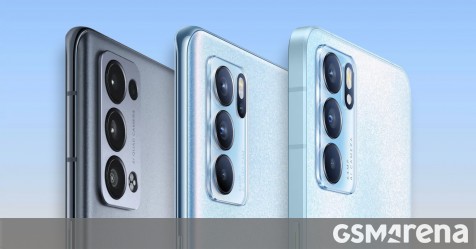 
The results from last week’s poll make it clear that the Oppo Reno6 Pro+ is the only one of the three Reno6 series models that people are interested in. It garnered 50% of the vote, which made it the undisputed favorite.

Even more telling is that it is the only one of its family to be above the bar of negative option in the poll – well above it, in fact. The Pro+ also leads its siblings in the popularity statistic we track on our site.

So, what went wrong? Many in the comment section complained that Oppo priced the phones too high. But an even bigger issue is the existence of the Reno5 series that launched a few months ago.

Comparing the new phones to their predecessors, it is easy to see that they are just not that different. With the Reno6 models you get a faster chipset and maybe a couple of other upgrades, but that’s about it. Being older, the Reno5 models can be bought for less money.

That said, the vanilla Reno6 is doing okay in the popularity statistic, so there may still be hope for the plucky 5G mid-ranger. It’s the first phone with the Dimensity 900, which promises to be one of the best-performing chips in the mid-range segment.