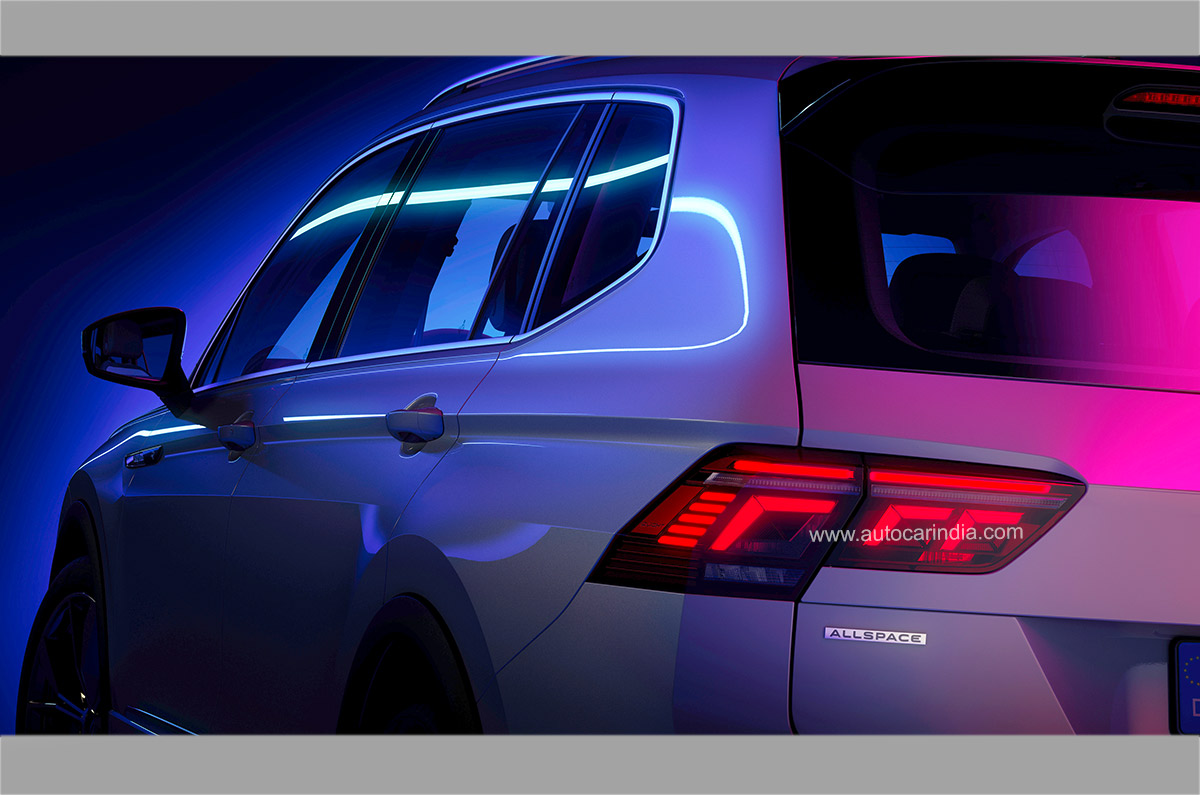 The Volkswagen Tiguan Allspace facelift has been teased ahead of its debut on May 12, 2021. The teaser provides a glimpse of the SUV’s rear, side and tail-lamp design.

As mentioned above, the teaser shows the car from a rear-side angle giving us a look at the car’s basic profile, prominent shoulder line and tail-lamps. The most notable change in the teaser are the tail-lamps, which feature new LED patterning in-line with the Tiguan facelift that made its debut for international markets last year.

Overall, one could expect cosmetic changes to be similar to the standard Tiguan, with bits such as revised bumpers, a new front grille and re-shaped headlamps. Volkswagen has said that the Allspace “has received the same treatment (as the standard Tiguan) and now dazzles with a sharper look, digital cockpit and comprehensive connectivity.”

Moving to the cabin, the carmaker has confirmed that the updated Allspace will get new “control and assist systems” along with a “wide range of online-based services and functions” from the carmaker’s latest MIB3 infotainment system. One can also expect cosmetic changes such as revised switchgear and control surfaces similar to the regular Tiguan.

Little is known about any changes to the engine line-up, though one could expect the existing engines to be carried forward. Additionally while the standard Tiguan got a new sportier R variant with the facelift, it remains to be seen if its longer sibling will receive the same.

Volkswagen has a few important launches lined-up for India in 2021, including the all-new Taigun midsize SUV and the standard Tiguan facelift.

The Tiguan Allspace is still relatively new to the market, having been launched in March last year and imported into India as a CBU. Currently priced at Rs 34.20 lakh (ex-showroom, India), there is no confirmation on if and when the updated three-row SUV will come here.

Every pair of sunglasses in The Matrix movies, ranked

Learn a new skill in 2021 with one of these discounted...

Maidaan: After shooting for a schedule, is Keerthy Suresh considering to...

[email protected] - January 18, 2020 0
National Award-winning actress Keerthy Suresh is gearing up for her Hindi debut film Maidaan. She started shooting for the film in October last...

Simple One e-scooter India launch on August 15, priced under Rs...

Games on every platform to get you through the long, COVID...

Rick and Morty Drops Japanese Anime Short as We Wait for...