Vivo has revealed the schedule for its Android 10 update for the Chinese market. The company will launch the public beta of its Android 10 based Funtouch OS 10 starting with the Vivo Nex 3 on March 14. It will be open to the first 4,000 users who register between March 6 and March 12. Funtouch OS 10 brings several improvements to the user-interface (UI), performance, and other aspects of the operating system. Vivo will be releasing the update for other devices in batches over the next several months. 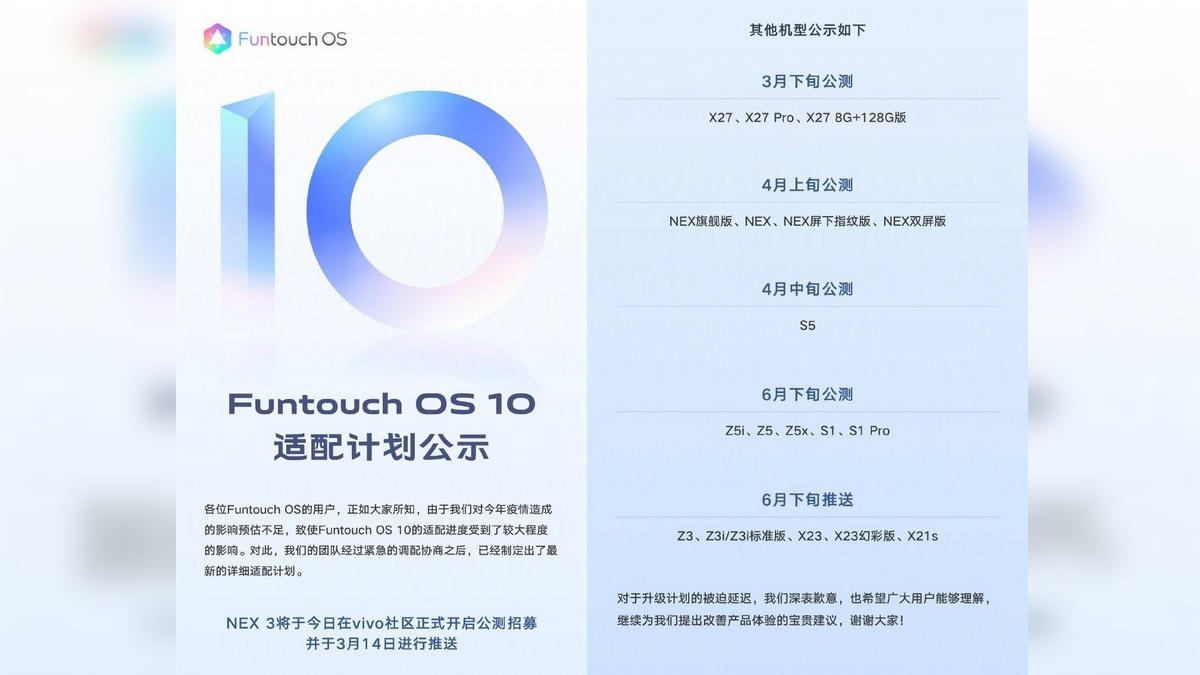 In December last year, the company rolled out its roadmap for Funtouch OS 10 and stated that the updates will begin from February 2020. Last month, Vivo announced that it had to delay its Funtouch OS 10 update due to coronavirus concerns, but now it has released a schedule for Vivo smartphone users on its Weibo page. The post lists the different phones including the Vivo X27, Vivo X27 Pro, Vivo Z5 series, among others, along with the month of release. The Vivo X27-series will start getting the update in late March while the Vivo Z5-series will get it in late June. The Vivo S5 will get the Android 10 based Funtouch OS 10 beta update in mid-April.

The Vivo S1, Vivo S1 Pro, Vivo Z3-series, Vivo X21-series, and the Vivo X21s will also get the update in late June. Exact dates for any of the releases have not been mentioned by the company.

According to the official forum, the Funtouch OS 10 update brings a lot of changes and improvement, along with better performance and stability. There are several changes with the Jovi homepage as well as updated driving scene functions, along with a new telephone secretary. Other changes include customisable lock screen charging animation, exchange rate conversion function in calculator, and a housekeeper service.

After the registration period ends on March 12, the update will be pushed uniformly on March 14.