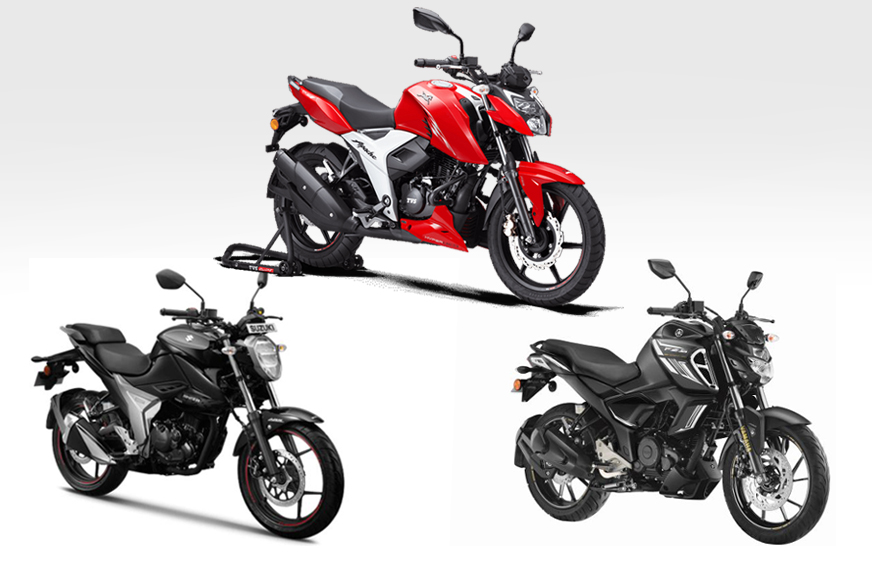 The 150-160cc motorcycle space has three prime players, the TVS Apache RTR 160, the Suzuki Gixxer and Yamaha FZ, battling for supremacy. Each of them have been updated to comply with the upcoming BS6 emission norms. Here’s a look at how they stack up against each other, on paper.

The first thing to keep in mind about the BS6 updates is that the engines are now fuel-injected. The TVS, Suzuki and Yamaha motor’s are all expected to come with a crisper throttle response, as we’ve discovered after riding the 2020 Apache 160 4V.

Now, when we look at engine displacement, the TVS has the biggest motor of the three while the Yamaha’s engine is the smallest, displacing 149cc. The TVS’ motor is also the most advanced here, featuring a 4-valve head and oil-cooling, while both the Japanese engines have a simple 2-valve layout and are air-cooled.

It’s the same story when we compare the power figures as well. As the old saying goes, there is no replacement for displacement and it’s true in the case of this spec comparison too.

The Apache’s engine produces the most power here, about 2.4hp more than the Gixxer and roughly 4hp over the FZ. But bear in mind that it has to rev higher to produce its 16.02hp peak power. That’s certainly a big gap and in fact, all three engines have lost power in migrating to BS6-spec. We’ve explained why this has happened, here.

The difference in torque, however, isn’t as wide as the power figures.

All engines are paired to 5-speed transmissions.

In terms of size, the Yamaha’s proportions are the most compact, though it is slightly taller. The FZ’s wheelbase is the shortest too and that explains it’s flickability through traffic. The Gixxer is  equally happy to change direction, evident from its 1,335mm wheelbase. Compared to the Japs, the Apache’s 1,357mm is pretty long.

All motorcycles here use a telescopic fork at the front and a pre-load adjustable monoshock at the rear. That said, the TVS’ higher ground clearance, at 180mm, should make it better suited to handling broken roads and tall speed breakers. But those who like fat tyres on their motorcycle, the Gixxer and FZ’s wider rubber should be more appealing.

The Yamaha trumps the other two when it’s time to put the bikes on the weighing scale. At 137kg, the FZ is significantly lighter than the Gixxer and Apache – the latter almost breaching the 150kg mark. Lastly, the FZ’s seat height, at 790mm is the most accessible of the lot.

There’s isn’t much separating the Apache, Gixxer and FZ. All of them feature LED headlamps, ABS and digital instrument clusters. That said, the FZ’s instrument cluster is the tiniest of the lot and not the most informative either.

The TVS Apache RTR 160 4V certainly has the edge over the Gixxer and FZ, at least on paper. At Rs 99,950 for the front disc rear drum variant and Rs 1.03 lakh for the version with the rear disc, the Apache is priced well but it is not the most affordable. That tag goes to the Yamaha FZ, priced at Rs 99,200. The Suzuki Gixxer, on the other hand will set you back by Rs 1.12 lakh, which is quite a premium. But, on the whole, the TVS Apache offers the best value proposition.