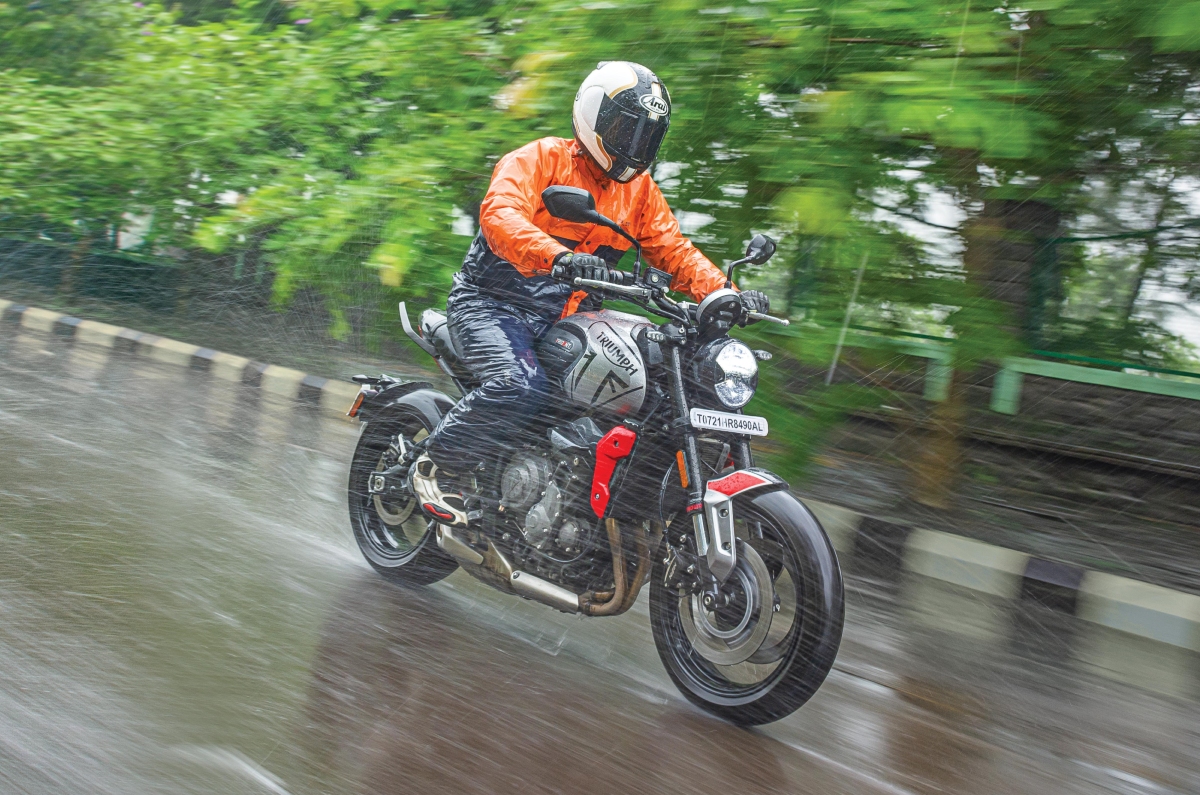 
Remember when middleweight motorcycles had middleweight price tags? Sadly, that isn’t the case anymore for quite a few models, including Triumph’s very own Street Triple range. In international markets, the affordable mid-capacity naked bike segment is still as alive as ever though, and Triumph has re-entered that competitive space with what you see in the pictures. It wears the iconic nameplate of a bike from half a century ago, but shares its DNA with the latest Street Triple and has potential to become one of the company’s most successful models.

We had been having a run of luck when it came to the monsoon this year, with it pouring just before or after our shoots. Unfortunately, record-setting torrential rain quickly brought that streak to an end. But I wasn’t going to let the torrential weather play spoilsport even if it meant I had to don my garish rain gear and wait for the rain to ease to the point that our photographer was willing to take his camera out. While we played the waiting game, I had not much to do other than stare at the Trident, and I realised that it looks more substantial in pictures than it does in reality, but while it is compact, it does have a good sense of presence and does stand out.

The rounded tank, simple radiator shrouds and front fender are pleasing to look at, but not noteworthy in any way. Triumph’s commitment to the retro theme for this bike is evident from the circular headlight and instrument cluster. The only special and unique element is the minimalist tail with its integrated tail-light and coloured underside, which results in a striking rear end.

While some will wish it was larger many will admire how unintimidating it is. It’s the smallest bike Triumph makes right now and it’ll feel right at home to people upgrading from the 300-400cc segment. This is just one of the many things that remind you that it’s targeting less experienced riders. The 805mm seat height and 189kg kerb weight will also be manageable for riders of most sizes. As for the riding position, it’s friendly as well, with slightly rear-set foot pegs highlighting its sporty intentions. That said, riders taller than six feet will not be the most comfortable, as their knees will extend to the edge of the knee recesses. Large boots also end up coming in contact with the pillion foot peg holders.

Triumph Trident 660: how does it perform?

While I did take on what felt like a cloud burst during the shoot, I did manage to spend some time with it in more favourable conditions. What you quickly realise is that the Trident does in fact have a unique engine. Its 660cc inline-three has a different bore and stroke than all of the Street Triples, including the 660cc Street Triple S sold abroad. It also runs a lower compression ratio, resulting in a power delivery that is quite different. This engine has a very linear flow of power and it’s completely missing the manic top end that is associated with the Street Triples. Unlike those bikes with their 12,000-plus rpm redlines, the Trident tops out at just over 10,000rpm. That being said, it still puts out a healthy amount of power and torque, and 81hp means it’s plenty fast, but without becoming too much of a handful. This is what Triumph was going for – along with great tractability and its shorter gearing, you can easily hold high gears at low speeds without having to frequently downshift. That makes the Trident a pleasure to ride around calmly at slow speeds. It’s also got the refinement and iconic exhaust note of Triumph’s inline threes. Another positive is that the service intervals are at an impressive 16,000km. However, it’s worth noting that you still have to get the bike serviced once a year and a regular service costs around Rs 9,000, which is about the same as the Street Triple. 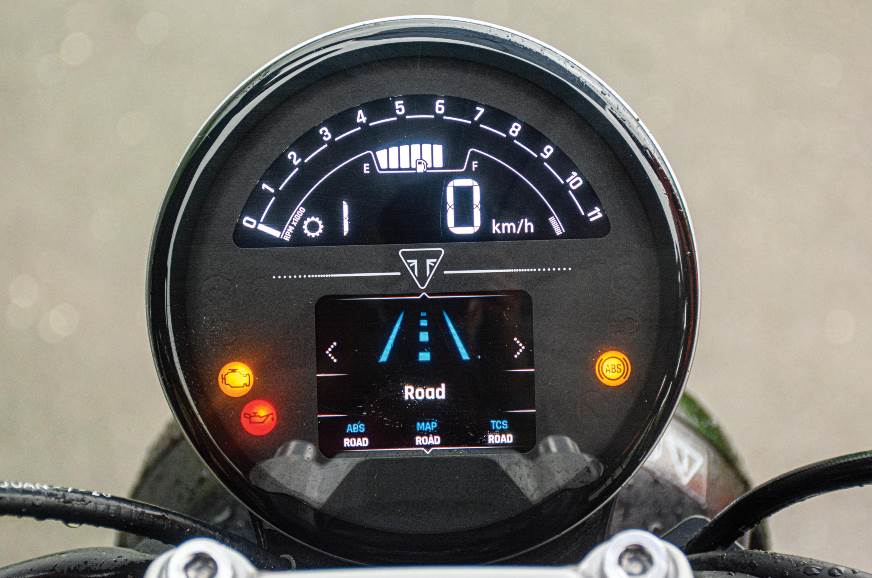 The small TFT display is easy to read, looks classy.

However, it’s not all perfect though as there’s a noticeable delay at low RPMs, followed by a sudden spurt of power as the engine crosses about 3,000rpm. This is accompanied by the slightly heavy clutch pull and throttle action comes in the way of what would have been a really potent machine in the city.

Another hint at this Triumph’s intentions is that there is no Sport mode – only Road and Rain. Road mode does make all the power available, but the traction control system feels a little too protective and it cuts power unnecessarily at times. Luckily, it has the option to be completely switched off.

Moving on to another important aspect of the Trident, the ride and handling. I can confidently say that the Trident does well on rough surfaces and it covers large speed breakers without fuss as it sits decently high off the ground. The suspension setup though is a little on the firm side, but not to the point of being uncomfortable. Similarly, the seat is firm but spacious and supportive enough for both rider and pillion. 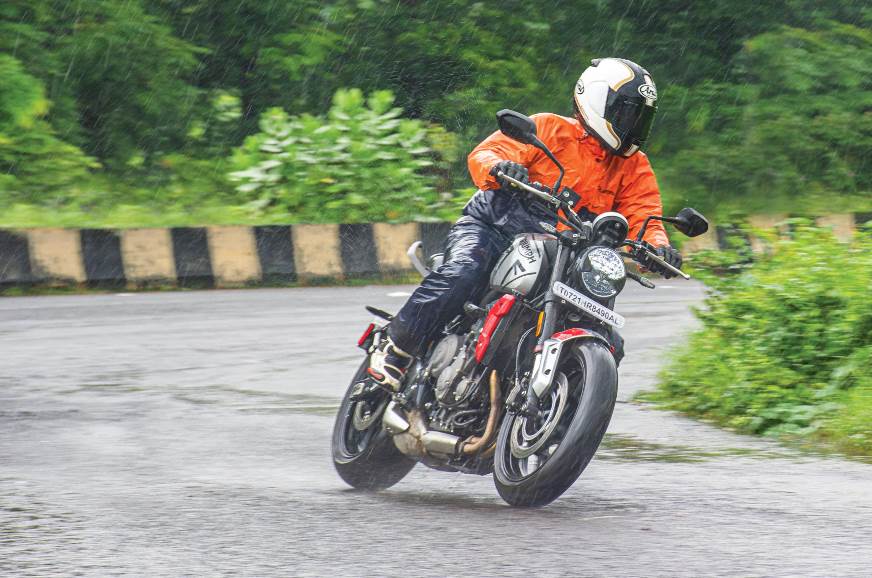 It has multiple attributes that are aimed at less experienced riders.

Despite the simple Showa suspension components and steel frame, the Trident can take on a set of corners at impressive speeds. It feels quite light and sure-footed and the Michelin Road 5 tyres offer ample grip. However, the riding position and general character of the motorcycle tend to keep you settled in the seat rather than putting you in an aggressive stance. There’s also enough stopping power on offer from the brakes, but the feedback from the lever is quite dull, with the first half inch or so of lever pull not really doing anything.

Triumph Trident 660: should you buy one?

With a starting ex-showroom price of Rs 6.95 lakh, the Trident costs around Rs 1 lakh less than the Street Twin and around Rs 2 lakh less than the Street Triple R. This fact alone brings a lot of attention to the Trident as it’s the company’s most attainable offering while also being a compelling overall package. As far as rivals are concerned, its competitive price positions it above the Kawasaki Z650, but significantly below the Honda CB650R. Our time with the Trident has revealed that it’s not all perfect, but it is a beginner-friendly, easy-to-live-with and fun machine, all with Triumph quality and at a reasonable price.