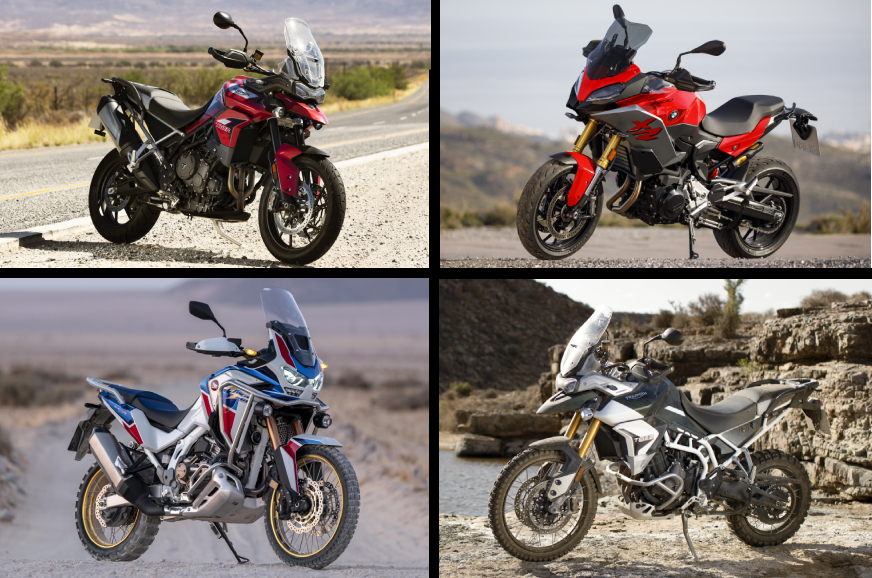 Triumph just launched the new Tiger 900 in India in three variants – GT, Rally and the top-spec Rally Pro. These adventure tourers find themselves in a relatively empty pool of competition, considering a number of their rivals haven’t been updated to comply with BS6 norms. At the moment, the road-going Tiger 900 GT rivals the new BMW F 900 XR, which happens to be the Triumph’s closest competitor at the moment despite being more of a road-focused sport-tourer. On the other hand, the Tiger 900 Rally finds itself in the same bracket as the new Honda Africa Twin CRF1100L Adventure Sports. Having said that, the top-spec Rally Pro offers a tad more, which is why it’s more suited to take on the Africa Twin.

Here’s how the two new Tiger 900s stack up against their closest competitors on paper.

The Tiger 900s may have an all-new 888cc inline-triple engine, though compared to their rivals, the units’ peak output figures are the lowest of the lot, albeit not by too large a margin. The F 900 XR’s engine displaces a very close 895cc, but it produces the most power here – nearly 10hp more than the Tiger 900 and 3hp more than the Africa Twin, which employs a larger engine. However, the Africa Twin’s 1,084cc parallel-twin unsurprisingly produces the most torque here – 13Nm over the BMW and 18Nm more than the Tiger 900s. The Africa Twin also produces its peak output figures lower in the rev band in comparison to the other two.

While the Africa Twin is no slouch in terms of outputs, the bike also happens to be the heaviest of the lot. Subsequently, its power-to-weight ratio is only slight above the Tiger 900 Rally Pro’s. There’s just a 1kg difference in weight between the Tiger 900 GT and F 900 XR. However, as the BMW makes more power, it consequently has a noticeably higher power-to-weight ratio.

The Africa Twin Adventure Sports is also the only bike here to be available with an optional DCT gearbox, which should make riding off-road considerably easier than the Tiger 900 Rally.

To make this simple, we’re first going to compare the Tiger 900 GT to the F 900 XR and then take a look at the Rally and the Africa Twin.

The GT and F 900 XR are road-oriented motorcycles and their hardware and specifications are indicative of that, especially the BMW.

The XR may have the upper hand in terms of dynamics thanks to its road-oriented tyres and 17-inch rims. We enjoyed riding the XR on smooth winding roads in Spain and even though the new Tiger has improved dynamics, whether it can handle as well on the road remains to be seen. On the other hand, with its 19-inch front wheel, greater suspension travel and more sophisticated suspension, the TIger will undoubtedly be better off-road.

Moving to the Rally and Africa Twin, both are designed to be off-road-oriented, go-anywhere motorcycles. Both feature a 45mm USD fork and monoshock from Showa that are fully adjustable.

All the motorcycles here come well-equipped in the features and electronics department. The Tiger 900 GT offers IMU-based cornering ABS and traction control with Rain, Road, Sport and Off-Road riding modes. Additionally, it comes with features like cruise control and heated grips as standard. In comparison, the F 900 XR offers only two riding modes – Rain and Road. However, there are a number of features available as optional equipment. This includes the riding modes Pro package, cruise control, a bi-directional quickshifter and an electronically adjustable rear shock.

The Tiger 900 Rally offers the same electronics package as the GT and despite how comprehensive it is, the Africa Twin offers a tad more. On the Africa Twin, the electronic tech includes a six-axis inertial measurement unit (IMU), wheelie control, cornering ABS, rear-lift control, DCT cornering detection and cornering lights; the Honda’s new 6.5-inch TFT display is compatible with Apple CarPlay too. The Africa Twin also gets cruise control as standard. The Adventure Sports version also adds tubeless wheels, a charging socket, a larger skid plate and an aluminium rear rack.

The electronics on the Africa Twin Adventure Sports are more in line with that of the top-of-the-line Tiger 900 Rally Pro. Triumph offers Rider-configurable and Off-Road Pro riding modes, LED fog lamps, heated rider and pillion seats, the My Triumph connectivity system, a bi-directional quickshifter and a tyre pressure monitoring system.

As you can see, picking a clear winner based on their specifications is nearly impossible. The standard Tiger 900 GT offers better hardware and features than the BMW F 900 XR, but the latter has the most powerful engine here. It’s also over Rs 3 lakh more affordable than the Triumph.

The Tiger 900 Rally and Honda Africa Twin are quite closely matched on a number of aspects. The Tiger 900 Rally Pro offers a more comprehensive electronics package and undercuts the Africa Twin; the DCT-equipped Honda carries an even higher Rs 16.10 price tag. The better model can only be picked one we’ve ridden them extensively in the environment they were designed to tackle.

Shaheer Sheikh says he’s supporting those that are financially dependent on...

EXCLUSIVE: Shimla Mirchi to release in single screens before being out...

WhatsApp Group Call Limit Increased, Will Now Support Up to 8...

Abhishek Bachchan starrer Breathe: Into The Shadows to release on July...