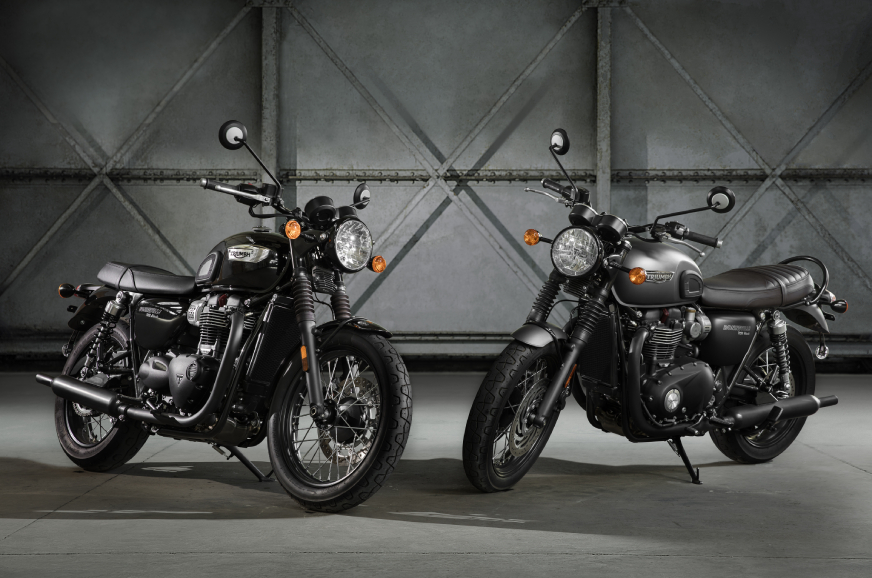 Triumph India has launched the new Bonneville T100 and Bonneville T120 Black editions at Rs 8.87 lakh and Rs 9.97 lakh, respectively. Bookings for both motorcycles are open across India. Interestingly, the bikes are priced the same as their standard counterparts.

The Black editions of the Triumph Bonneville T range feature blacked-out components instead of chrome that’s on the standard versions. These components include black engine casings, twin pea-shooter exhaust, mirrors, headlamp rim and the wheels. The T120 Black also gets a black grab rail and brown seat to distinguish it from its lower-capacity sibling. The liberal use of black all over the classic design aims to add a touch of modernity and will appeal to those who do not like the bling of chrome on their motorcycle.

Like the rest of Triumph’s modern classic range, the T100 and T120 Black get an electronic safety net in the form of dual-channel ABS and switchable traction control. The T120 also gets two riding modes, Road and Rain.

Other common features include ride-by-wire, USB charging port and an engine immobiliser; the T120 also gets heated grips.

The 10 best sex scenes in film, from Unfaithful to Blue...

13 great movies leaving Netflix, Hulu, and Amazon at the end...

Samsung Galaxy A51 Goes on Sale Tonight in India via Online,...

Redmi to Launch Its First Redmi Band on April 3

Samsung Galaxy J6 Starts Receiving Android 10 Update Along With One...