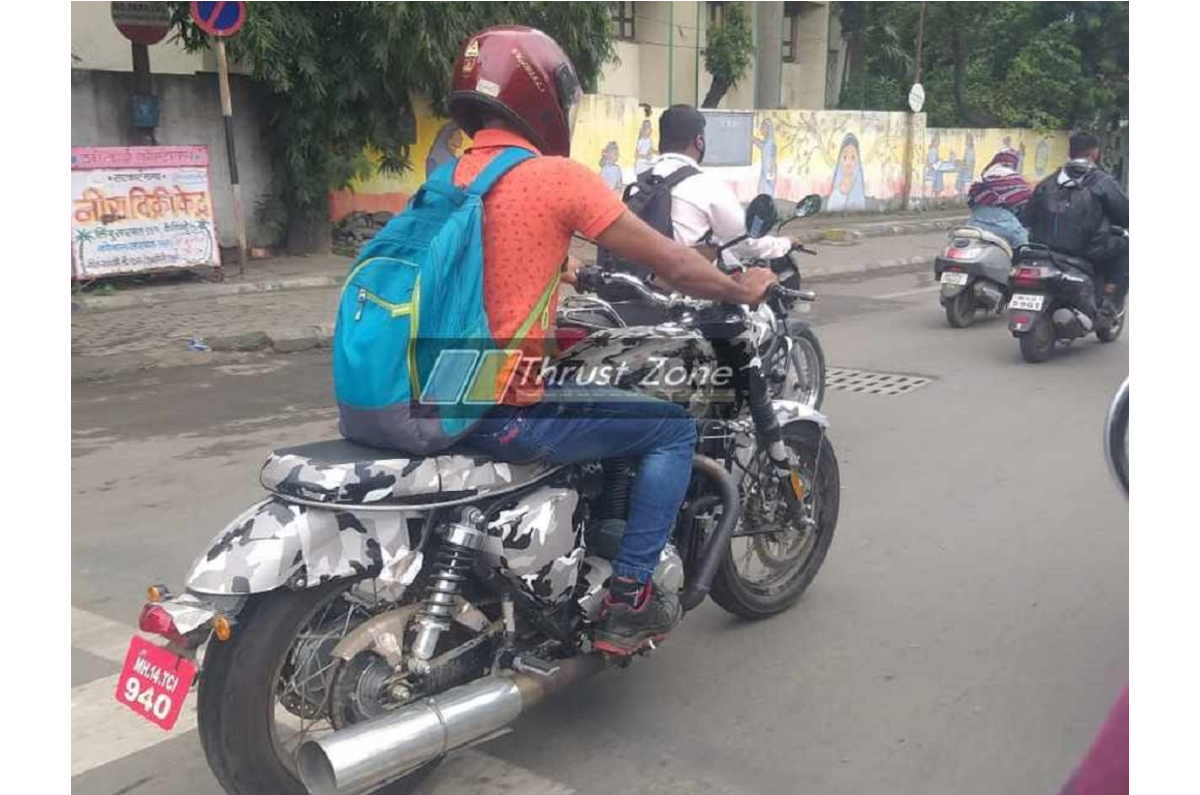 Fresh images have emerged on the internet of a new retro-themed motorcycle that has been spotted testing wearing significant camouflage. Some reports say that this is the first sighting of the Bajaj-Triumph motorcycle, but we believe it is more likely to be the new BSA motorcycle that Classic Legends is currently developing.

Is this the Bajaj-Triumph motorcycle?

We don’t think so. Bajaj stated that the first motorcycles to emerge from the new alliance with Triumph would be small capacity, 200-250cc bikes with a targeted price tag of under Rs 2 lakh. The motorcycle spied here doesn’t fit that bill, not only because it looks quite large, but because what’s visible of its engine suggests that it is much bigger than 200-250cc. Besides which, the upcoming Triumph’s are expected to take on a more modern-classic appearance with a focus on technology.

Late last year, Bajaj signed an MoU with the Maharashtra government to invest Rs 650 crore in a new plant at Chakan dedicated to building KTM, Husqvarna and Triumph motorcycles as well electric vehicles starting with the Chetak. We expect to see the Triumph motorcycles out on test at some point before the anticipated 2023 launch, but that has not happened yet.

Is this the upcoming BSA motorcycle?

This is far more likely. We recently broke news that the upcoming BSA motorcycle would be powered by a 650cc single-cylinder engine and the motorcycle seen here corroborates that. The engine has air-cooling fins visible, but a closer inspection clearly shows a black hose emerging from the engine and leading to what appears to be a fairly large radiator. As with the modern Triumph Bonneville range, it appears that Classic Legends will be using a liquid-cooled engine, while aiming to offer the look of an air-cooled motor.

Other things that can be seen are that the bike gets a single front disc set-up, and Pirelli Phantom tyres – both also seen on the 900cc Triumph Bonnevilles. Beyond that, the bike has a long and low stance, with a single exhaust, twin shock-absorbers and fork gaiters on the front suspension adding to the retro theme.

In late 2020, Classic Legends announced that it intends to build the BSA motorcycles in the UK, but the fact that it has been spotted testing here makes sense because the Classic Legends R&D facilities are based here. If you’re wondering why this motorcycle will be built in the UK and not in India, where manufacturing costs are undoubtedly lower – click here.

Along with the announcement that the company was going to build the bikes in the UK, Classic Legends also stated that assembly would start by mid-2021, but that appears to be delayed.

Nevertheless, the new BSAs are reported to cost between £5,000 and £10,000 (Rs 5.1 to 10.2 lakh). This means it is likely to be priced above the accomplished Royal Enfield 650cc twins and aimed more closely at the Triumph Bonnevilles and Kawasaki W800. With such an ambitious targeted price, it is unlikely that we will see these motorcycles in India anytime soon.