The launch of the AMD Radeon RX 5600 XT was anything but straightforward. AMD announced its latest mid-range graphics offering at CES in January this year at $279 (approximately Rs. 19,890), calling it the “ultimate GPU for 1080p gaming”. AMD’s official publicity materials showed it edging out the equivalently priced Nvidia GeForce GTX 1660 Ti in multiple games. It was positioned as the ideal upgrade over the Radeon RX 590 series or the iconic GeForce GTX 1060, which are now relatively old but still widely used.

Nvidia decided to try and spoil the party by unofficially cutting prices of its GeForce RTX 2060. In the US at least, people reported seeing models on sale for $299 (approximately Rs. 21,320), down from the official $349 (approximately Rs. 24,885) launch price – it should be noted that prices in India haven’t gone down at all.

AMD responded in a rather unprecedented way – by changing the specifications of the Radeon RX 5600 XT after its launch. More specifically, it offered a new BIOS for its board partners to distribute, which let them raise the TDP from 150W to 160W and the memory speed from 12Gbps to 14Gbps, as well as increasing the GPU boost speed. While a performance improvement is nice, not all Radeon RX 5600 XT graphics cards can handle these new parameters, and so not all will be updated to run at these specifications.

As you might imagine, that has created confusion in the market. Different models on sale right now have very different specifications, going well beyond the usual “factory overclock” or “performance mode” that manufacturers usually implement. We’re reviewing the Sapphire Pulse Radeon RX 5600 XT 6G graphics card today, which does benefit from this BIOS update, and we’ll attempt to navigate the situation so you know exactly what you’re getting. 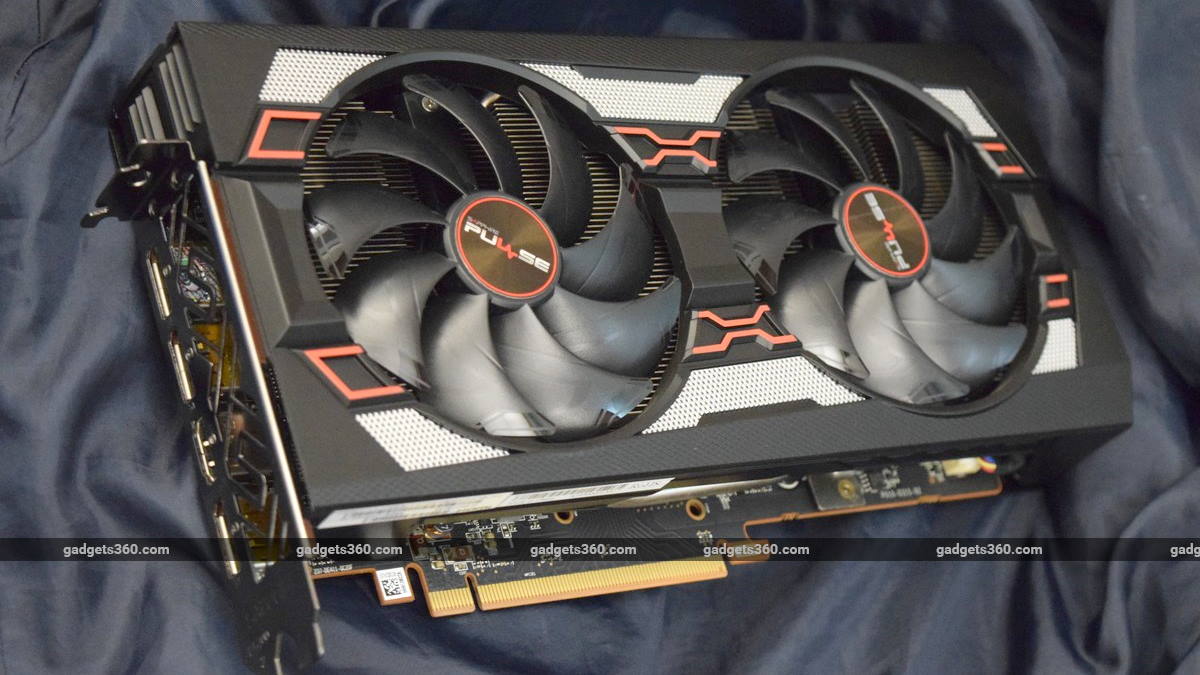 As its name suggests, this model slots in between the Radeon RX 5700 and the Radeon RX 5500 series. While these two product lines are targeted at 1440p and 1080p resolutions respectively, the new Radeon RX 5600 XT addresses a relatively small space between them. This is purely a strategic release to hit a price point that will hurt Nvidia, and so AMD defines this GPU’s target audience as people who want the best possible 1080p gaming experience with all the quality settings turned up all the way.

The Radeon RX 5600 XT uses the same GPU as the Radeon RX 5700, with just a few specifications changed. This is based on the RDNA architecture, codenamed Navi, which was unveiled last year. You get 2,304 execution units called “stream processors”, which is the same as with the Radeon RX 5700, but there’s 6GB of GDDR6 memory rather than 8GB, and the stock clocks are lower.

There is no reference design card from AMD this time. Board partners are free to design their own coolers and ship factory-overclocked models – this plays into the BIOS update situation, allowing for higher clocks on some Radeon RX 5600 XT cards.

AMD also talks up its drivers and software features. The most useful of these are Radeon Image Sharpening, a method of upscaling low-resolution games with low performance impact; Radeon Boost, which allows certain games to trade resolution for framerate on the fly; and Radeon Chill, which lets you cap framerates so your GPU runs cooler and quieter. 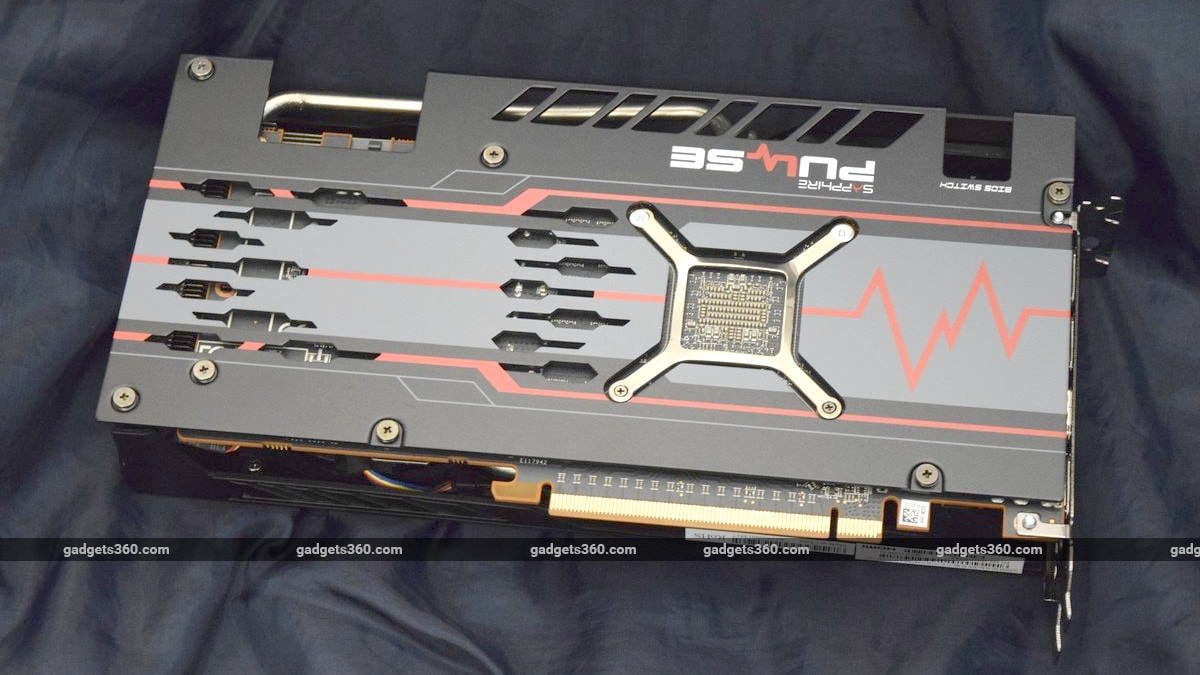 The metal backplate provides some rigidity and design flair

We have with us the Sapphire Pulse Radeon RX 5600 XT 6G for this review, which is one of the graphics cards that can benefit from a new BIOS. If you do choose to buy this card, you should make sure that it has been shipped with the new BIOS, or update it yourself. At the time of its launch, Sapphire specified the “game clock” speed (which is AMD’s term for the sustained speed when under load) as 1560MHz and the boost clock speed as 1620MHz. Post update, these have risen to 1615MHz and 1750MHz respectively – both significantly higher. The memory clock has gone up to 14Gbps and the TDP is now 160W to accommodate the thermal demands of this higher performance.

If that wasn’t enough, Sapphire’s graphics card has a BIOS switch on the top that lets users decide between Performance and Silent BIOS profiles. The specifications above are applied in Performance mode, while Silent mode pulls the TDP down to 135W, the game clock to 1460MHz, and the memory clock to 12Gbps.

The Sapphire Pulse Radeon RX 5600 XT 6G is physically a very large graphics card. The shroud is significantly taller, longer, and thicker than the circuit board itself, and will block more than two slots in your PC cabinet. The shroud itself is decked out in black and silver with orange-red accents, and it might not be to everyone’s taste, but that will most likely be hidden when this card is installed.

Sapphire has managed to make space for two oversized 95mm fans and a chunky aluminium heatsink. There’s also an aluminium backplate and an illuminated red Sapphire logo on the top. The shroud itself is decked out in black and silver with orange-red accents, and it might not be to everyone’s taste, but that will most likely be hidden when this card is installed in your PC case.

This graphics card requires a single 8-pin PCIe power connector. You get three DisplayPort 1.4 outputs and one HDMI port at the back. Dust stoppers for the ports are included, which we always appreciate. Sapphire suggests that you have at least a 450W power supply for your PC overall, though 500W is recommended. 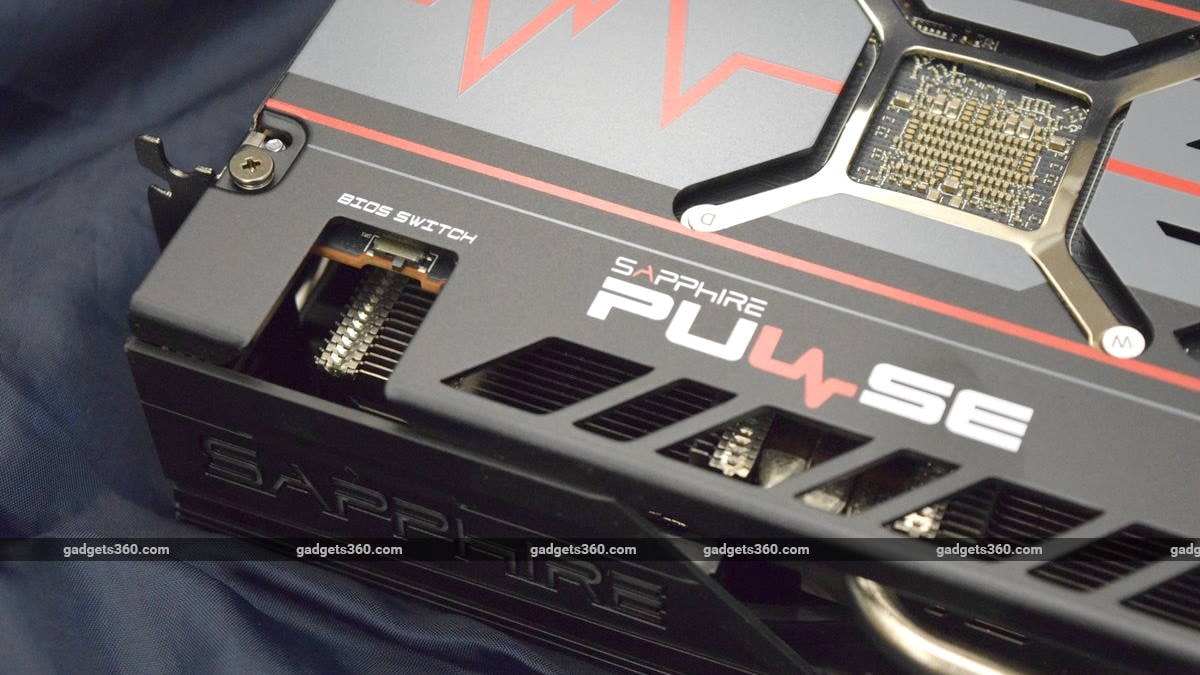 You can choose between Silent and Performance modes

Our unit was from one of Sapphire’s first production batches did not have the new BIOS installed. It’s possible that many such boxes will already be in warehouses and on retail shelves in India, and hopefully buyers will be aware that they can get more performance from these cards than they’ll deliver just as they are.

Sapphire’s website has a prominent BIOS update notice, but doesn’t make it clear that applying it means a significant potential performance improvement. The update process is also not completely risk-free. There are two separate BIOSes to be applied for the Silent and Performance modes, and you have to shut down your PC and flip the BIOS switch to make sure the card is in the correct mode before applying each one. Our test bench froze the first time we tried updating the card, and we were luckily able to reboot it without bricking the graphics card.

Once we were updated and running, we noticed quite a few changes in the stats reported by the GPU-Z diagnostic tool. The base and boost clock speeds were raised to their new levels, and as a result of those changes, the pixel fill rate went up from 103.7GPix/s to 112GPix/s. The memory bandwidth was also up from 288GBps to 336GBps thanks to the increase in GDDR6 speed. 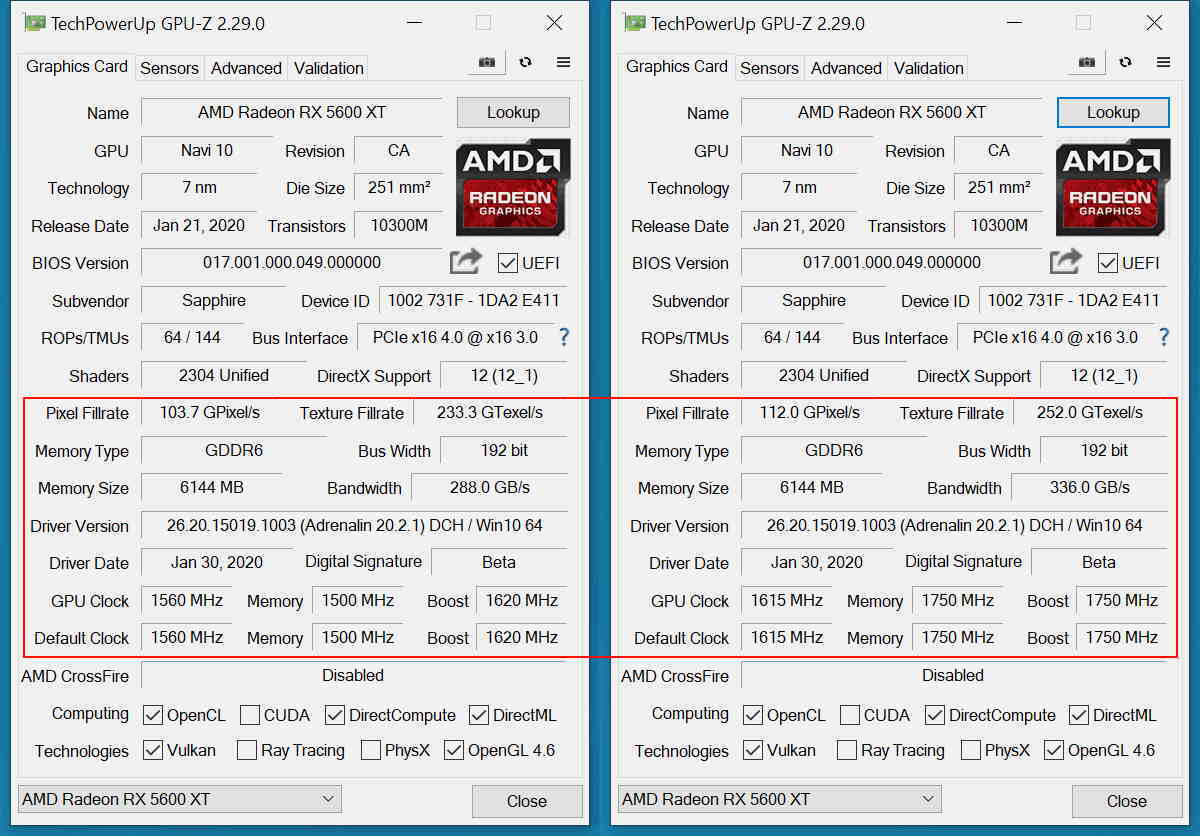 We ran the 3DMark benchmark suite before as well as after updating the BIOS so we could understand the difference it makes. The Time Spy test gave us 6,957 points before and 7,649 points after the update. Similarly, the Fire Strike Ultra score rose from 4,994 to 5,507 points. The quick World War Z game benchmark at 1920×1080 ran at 47fps and 53fps when using its Ultra and High presets before updating the BIOS. Following the procedure, those figures rose to 51fps and 57fps respectively.

One of the advantages of a huge cooler is that the fans can spin slower and quieter, and also spin down completely when the GPU isn’t being stressed. We did, however, feel that the fans on the Sapphire Pulse Radeon RX 5600 XT were a bit louder after the update.

For the rest of our tests, we concentrated on running games at 1920×1080 with their quality presets turned up to their highest levels, as per AMD’s targets and claims. We ran Middle-Earth: Shadow of War at its Ultra preset with TAA enabled and got a very good score of 87fps. There was very little jitter on screen as the game’s built in benchmark progressed. Metro: Last Light Redux gave us 81.84fps at its Very High preset with SSAA turned on.

Similarly, we ran through Far Cry 5 which looked great. At 1920×1080 using the Ultra preset, we got an average of 83fps and things looked smooth throughout. Shadow of the Tomb Raider, another popular game, also looked great at 1920×1080 using its Highest preset with TAA and 8xAF enabled. This benchmark ran at a very comfortable average of 91fps.

During a manual playthrough of Battlefield V at the Ultra preset, we felt a little bit of stutter in some parts but the experience overall was very good. The game’s built-in frame counter showed us performance hovering around the 110fps mark except in heavy battle scenes. Similarly, The Witcher 3: Wild Hunt gave us an average of 83fps with the graphics set to Ultra and post-processing set to High.

It seems as though you will easily be able to play most current and recent games at a solid 60fps with all the quality settings turned up at 1920×1080, which is essentially what AMD promised. There’s a little headroom so 2560×1440 is well within reach, with relatively minor compromises required. We see performance that’s generally equal to or better than what the GeForce GTX 1660 Ti delivered, though it doesn’t quite reach the framerates that the GeForce RTX 2060 can deliver. 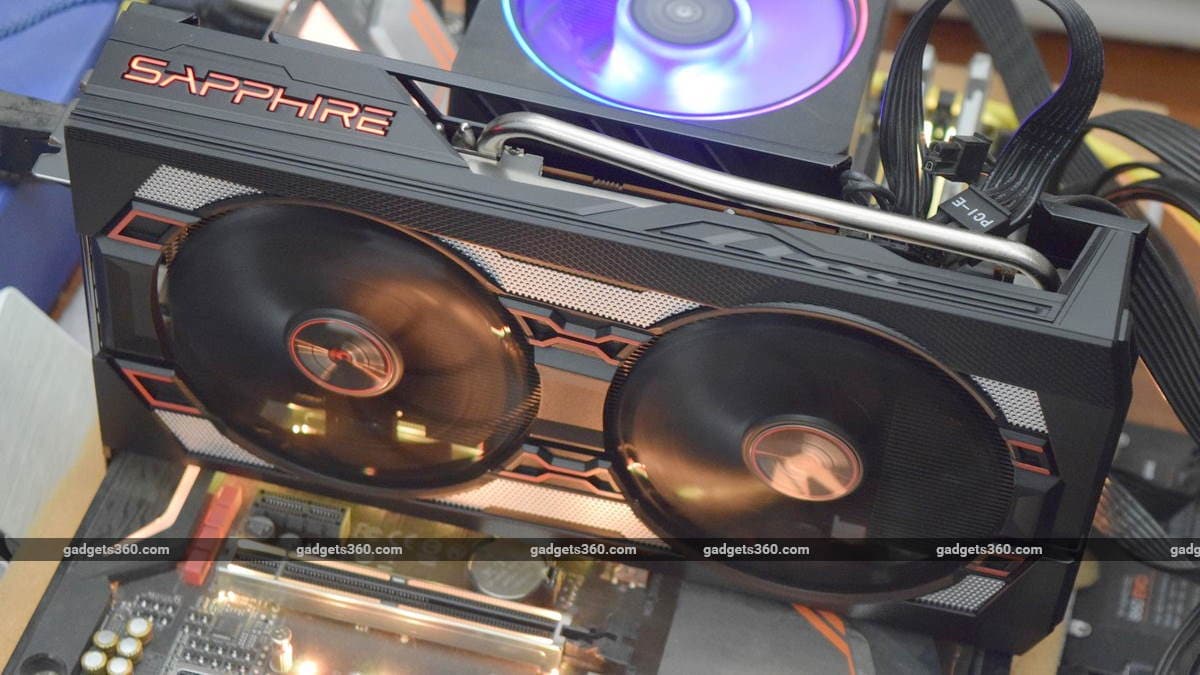 The main thing to keep in mind is that not all Radeon RX 5600 XT graphics cards will run at the same speeds and offer the same levels of performance. It will be very important to check the specifications of different graphics cards thoroughly before buying one.

If you know that you aren’t going to buy a monitor with a higher resolution than 1920×1080 for the next few years, you don’t need much better than this. That said, AMD usually has trouble matching Nvidia’s prices in India, even for products that cost exactly the same in other parts of the world. The Sapphire Pulse Radeon RX 5600 XT 6G is in fact priced higher than it should be, at Rs. 26,499, and you can find GeForce GTX 1660 Ti graphics cards selling for under Rs. 23,000.

This erases the advantage that AMD has with this GPU in many other countries. In fact, GeForce RTX 2060 cards which perform a little better and benefit from ray tracing start at around Rs. 25,500 right now, and it would also make sense to go in that direction for future-proofing.

The Radeon RX 5600 XT GPU is one of AMD’s most competitive offerings in the GPU space in a long time, and we wouldn’t have any trouble recommending it if the price was right. The Sapphire Pulse Radeon RX 5600 XT 6G is a well-built card with no obvious flaws. It’s priced well compared to other Radeon RX 5600 XT cards but that just isn’t enough to beat Nvidia in India right now. However, you should check whether deals, discounts, and game bundles change this state of affairs at the time that you’re making your purchase decision.

Google Assistant, Maps and Search can now help you figure out where to vote – TechCrunch