In the last couple of years, it seems that we’ve been fast approaching peak smartphone design and innovation. Displays are as good as they need to get, cameras can show you things you can’t see with your naked eyes in the dark, and performance has reached a point where phones can power external displays and have more RAM than most average laptops. So the big question is, where do we go from here?

Last year, we caught a glimpse of what the future could hold for smartphone innovation with foldable phones. It was a shaky start, and of the small handful of companies that announced their products, only two have managed to actually begin shipping them to consumers – and that’s not without their own respective hurdles.

Last year’s Samsung Galaxy Fold is a powerhouse of a smartphone but we feel that its design isn’t the most ergonomic and its price tag is not for the faint of heart. Motorola is trying to sell you nostalgia with the Razr 2019, but other than its folding screen, it’s a pretty average-spec’d mid-range phone.

Yesterday, we had a chance to try out the heavily leaked Samsung Galaxy Z Flip at its Unpacked event in San Francisco, and for the first time, we believe that this can and should be the way forward for foldable devices.

First, let’s get some things out of the way before we dive into the experience of using it. The Samsung Galaxy Z Flip is the company’s second foldable phone, priced lower than the Galaxy Fold and the Moto Razr 2019, at $1,380 (roughly Rs. 98,400). It has a 7nm octa-core processor, 8GB of RAM, 256GB of storage, wireless charging, and eSIM support. Samsung has also tweaked its One UI operating system to include special gestures and features that take advantage of the folding screen, which we’ll get into in a bit.

When folded, the Galaxy Z Flip is tiny; about the size of a credit card wallet. In this state, it’s also pretty thick at 17.3mm. However, it’s still easy to manage as a small square, unlike the Galaxy Fold. The good news is that there’s no discernible gap between the two halves when folded, which should help keep dust and lint away from the screen. Opening the phone is usually a two handed affair, and we struggled to get it open using one hand. However, the lid can be kept open at pretty much any angle, up to 180 degrees. 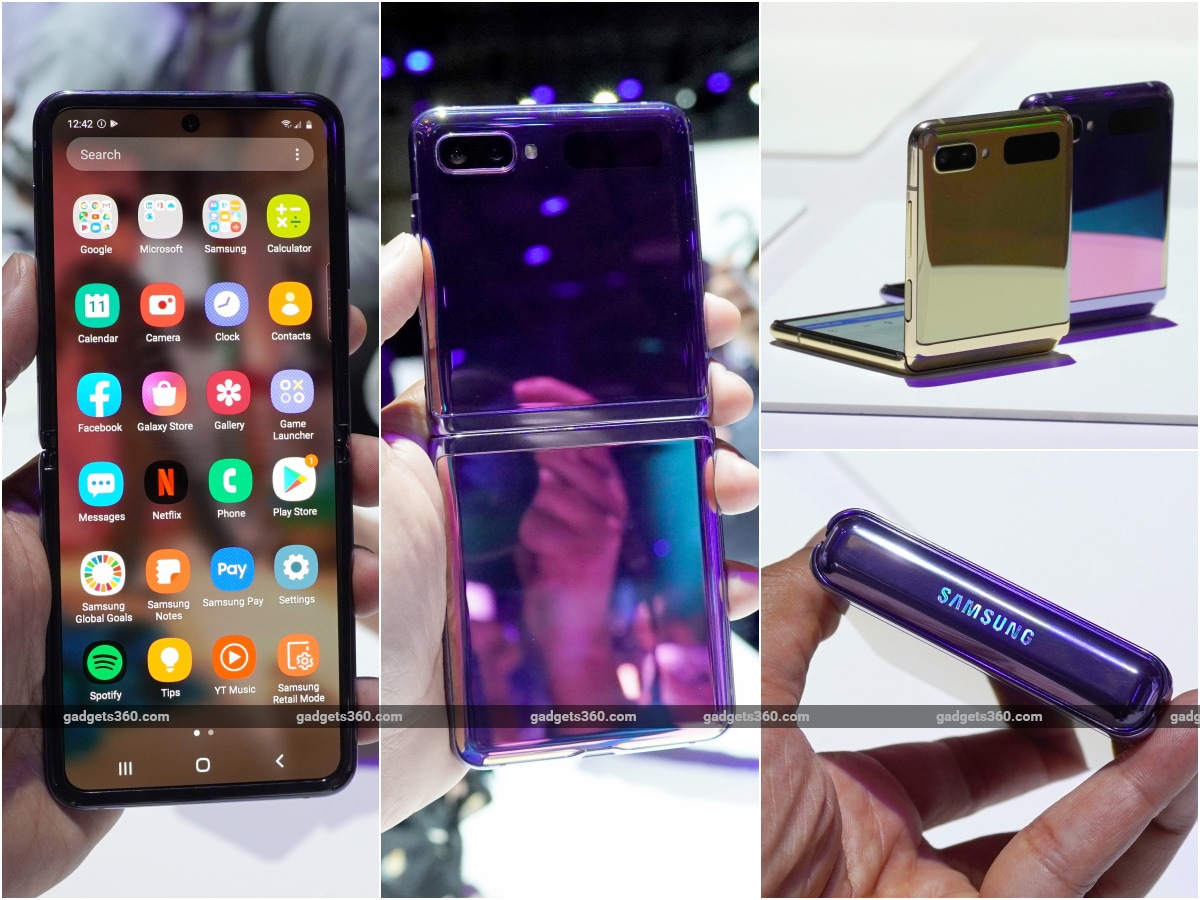 The Samsung Galaxy Z Flip can be used fully or partially opened, depending on what you want to do

Samsung is proud of its ‘hide-away’ hinge, which is completely hidden when you open the Galaxy Z Flip all the way. Not only that, the company has also added some micro-bristles which are supposed to brush out dust particles every time you open or close the device. Only time will tell how effective this solution really is.

The Galaxy Z Flip is available in three colours, but the outer surfaces are incredibly reflective and impossible to keep fingerprint-free. Of the three, we liked the Mirror Purple finish the most. This device feels very premium and sturdy, and the hinge itself feels like it should be able to withstand the punishment of everyday use. You get a USB Type-C connector and speaker at the bottom, and a flattened power button on the side, which also houses the capacitive fingerprint sensor.

On the outside, there’s a tiny 1.1-inch colour OLED touchscreen to see the time, notifications, etc, but you can also use this as a viewfinder when taking a selfie using the outer cameras. This is activated in the folded state by double-tapping the power button. It worked well when we tried it, and you can also switch between the primary and wide-angle cameras with a simple tap on the display. However, we’re not sure how much use most would get out of this trick, since the outer display is very small and we could barely see anything to clearly frame our shot by when holding the phone at arm’s length for a selfie.

Inside, we’re treated to a 6.7-inch full-HD+ Dynamic AMOLED display, which looked bright and vivid when we tested it out indoors. It’s also very tall with its 21.9:9 aspect ratio, which means most videos, such as Netflix shows which we tried out on the demo units, play with black bars to the left and right of the frame. The bezels are relatively thick but this didn’t really bother us. With time, we believe that Samsung should be able to shave them down, they way it has with its Galaxy S flagships over the years. 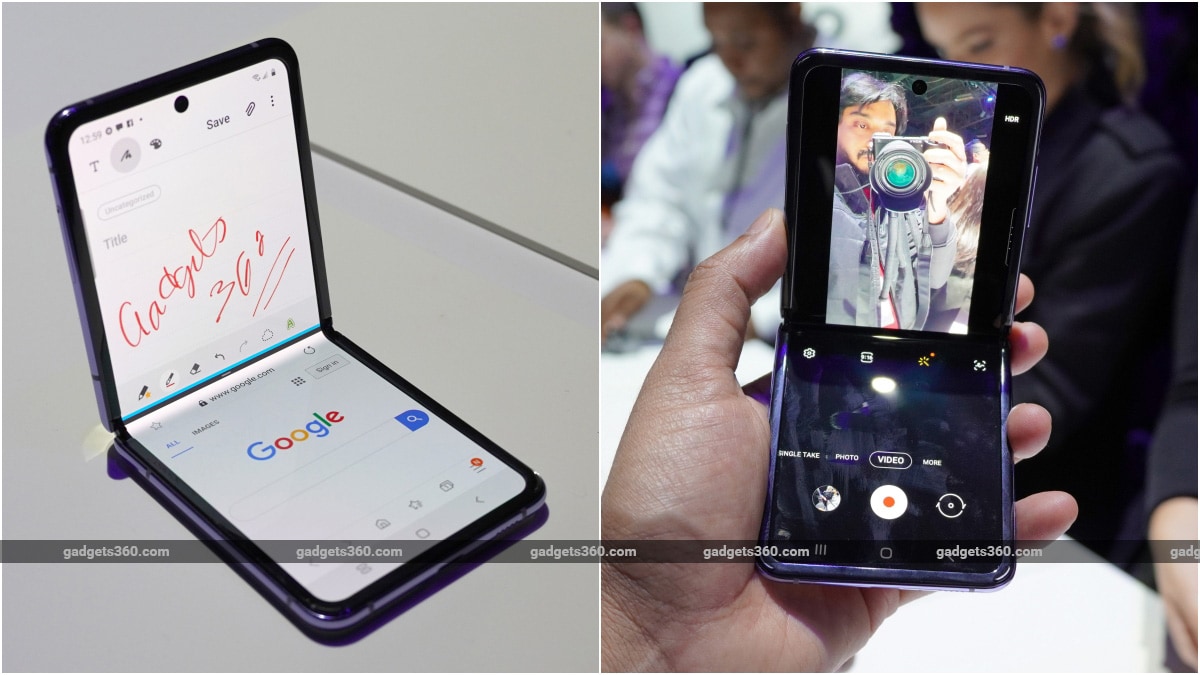 The biggest game-changer though is that the display is actually made using a layer of ultra-thin glass, which is the first we’ve seen on any foldable device. Up until now, we’ve only seen plastic protective layers on foldable phones, which are understandably not as durable as glass, so this is a big achievement for Samsung. There is a mild crease where the display bends but we didn’t find it to be as pronounced as the one on the Galaxy Fold, even when we ran a finger over it. With normal use, it’s barely even visible.

For software, the Galaxy Fold runs on One UI 2.1, based on Android 10. Samsung says it worked closely with Google to develop some software tricks that take advantage of the foldable screen. When the Galaxy Z Flip is partially folded and you open certain apps, they work in what’s being called ‘Flex mode’ which splits them up for the two halves of the display. The camera and YouTube app were the only ones we saw in action that made use of this. In the camera app, the upper half becomes the viewfinder while the lower half gives you all the shooting controls. It seemed to work well when we tried it. Also, if you jump to the gallery from the camera app in this partially folded state, you can use the bottom half of the display as a touchpad to flip though your photos, which appear on the upper half.

Another feature we tried out is called Multi Active Window, which lets you launch any two compatible apps from Samsung’s Edge Screen carousel, which will automatically snap to the two halves of the screen. You can then use the device in a fully opened or partially closed state.

We didn’t get a chance to test the quality of the cameras, since we were in a fairly poorly lit demo area indoors, but on paper, they seem alright. The Galaxy Z Flip doesn’t have an IP rating for water resistance, but we think this could change with future models. If you think about it, once upon a time, phone makers had to use rubber flaps on sockets and ports to make phones waterproof.

We obviously would have liked to have spent a lot more time with the Galaxy Z Flip, but after our brief encounter, we can’t help but feel optimistic about foldable phone technology. We think this form factor is going to be well suited to many users, and it also gives manufacturers the ability to use even larger screens while still keeping the phone pocketable. The biggest breakthrough in our opinion is the fact that Samsung has managed to create production-ready foldable glass for its phones, which should give many buyers some peace of mind. We can’t wait to see what other companies come up with in 2020.

We think the Galaxy Z Flip proves that foldable phones aren’t just a fad, or a desperate attempt by companies to come up with something new just for the sake of it. There is some real innovation here, and phones like the Galaxy Z Flip could be just as practical as the phones of today. If this is the future, then sign us up.

Disclosure: Samsung sponsored the correspondent’s flights and hotel for the trip to San Francisco.