Samsung Galaxy S20 is yet to be unveiled officially. But ahead of the formal announcement next month, a purported hands-on video has surfaced online. The new Samsung flagship phone is rumoured to have a 120Hz display with 20:9 aspect ratio, while retaining the ultrasonic in-display fingerprint sensor that we saw on the Galaxy S10 models last year. Apart from the Galaxy S20, Samsung is reportedly has the Galaxy Buds in the works as the successor to the Galaxy Buds with 12 hours of battery life. The new Galaxy Buds earbuds are said to come without active noise cancellation, though.

The 13-second video shows the back of the Samsung phone that has a rectangular-shaped camera setup with four sensors and an LED flash module. The phone also appears to have an Infinity-O Display (the company speak for a hole-punch display panel). Overall, the design featured in the video looks similar to what we saw in some recently leaked images that were claimed to be of the Galaxy S20 . The phone also doesn’t have a 3.5mm headphone jack, though it is said to come bundled with AKG USB Type-C earbuds that we saw first with the Galaxy Note 10 models.

Samsung is also reported to include a Super Fast charger in the retail box of the Galaxy S20 . The phone is rumoured to have 25W fast charging support.

Apart from the video, XDA Developers through a fresh post claims that the Samsung Galaxy S20 will come with a QHD display resolution that will have a pixel count of 1440 x 3200 pixels and 20:9 aspect ratio. The phone is also said to have the ultrasonic fingerprint sensor. This is unlike some earlier reports that suggested an optical fingerprint sensor.

The ultrasonic fingerprint sensor of the Samsung Galaxy S10 models last year raised some security concerns. However, it is likely that the South Korean company would use some tweaks to enhance the security — without shifting entirely the technology.

“The Galaxy S20 does not light up the fingerprint area (other than the display’s regular brightness levels), which essentially confirms the ultrasonic sensor,” the report by XDA Developers notes.

Samsung is also said to have used a 120Hz display panel with the option to let users switch to the regular 60Hz refresh rate in case if they don’t want a smoother viewing experience and conserve some power.

In comparison with the Galaxy S10, the Samsung Galaxy S20 is said to have a taller design. An image showcasing the height changes has also been leaked online. 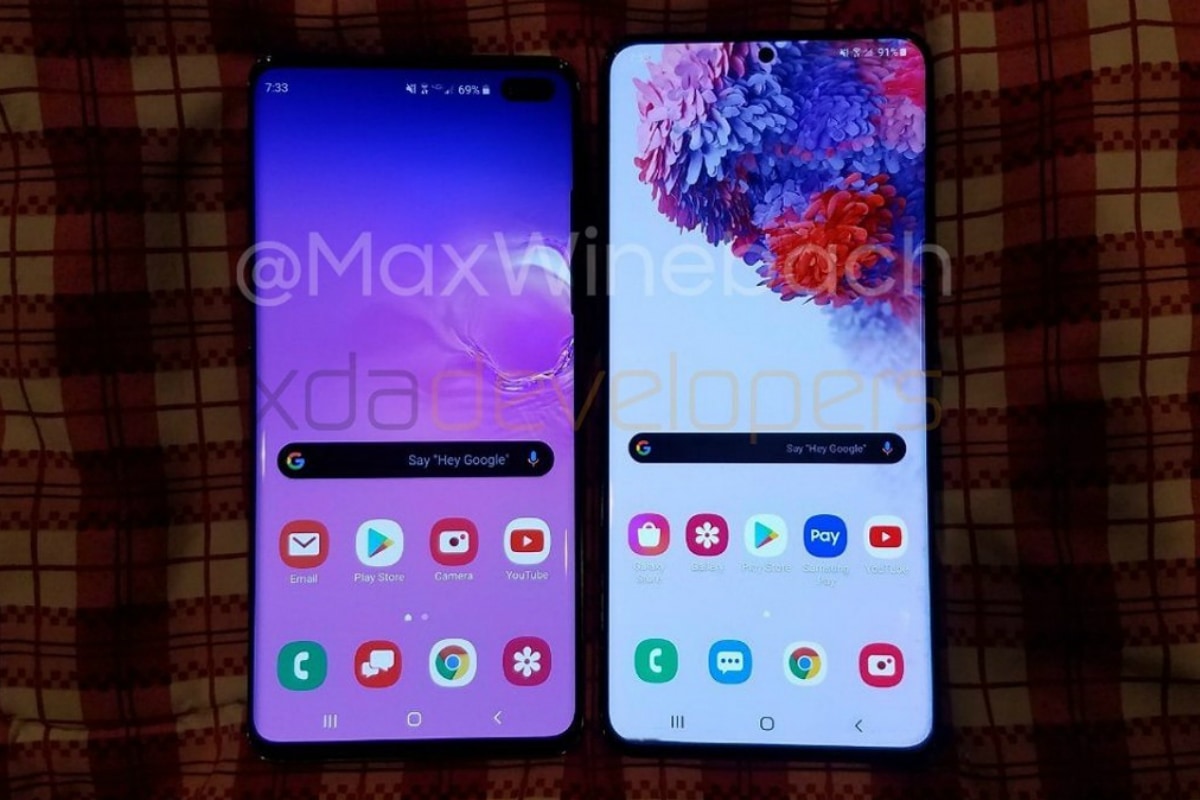 Further, some images suggesting the specifications of the Samsung Galaxy S20 have also been provided online that suggest 12GB of LPDDR5 RAM, Qualcomm Snapdragon 865 SoC, 128GB of UFS 3.0 storage, and a 4,500mAh battery (with a typical capacity of 4,370mAh).

Camera features of the Samsung Galaxy S20 have also been leaked. The phone will have a 12-megapixel primary Sony IMX555 sensor, secondary 64-megapixel Samsung ISOCELL S5KGW2, and a tertiary Samsung ISOCELL S5K2LA sensor, XDA Developers claims in a separate report. A 10-megapixel Sony IMX374 image sensor is also said to be available at the front with 4K video recording support.

Some past rumours suggested that the Samsung Galaxy S20 would come with a 108-megapixel primary sensor. The fresh report, however, doesn’t provide any clarity on that front, though the company could be using a binning solution to provide a lower resolution output.

Having said that, the latest revelation mentions that the Samsung Galaxy S20 will have 8K video recording support at 30fps frame rate and with 16:9 aspect ratio. The phone would also have 4K 60fps video recording with OIS and EIS support for both front and rear cameras. Further, there would be the zoom-in mic that debuted on the Galaxy Note 10 series last year.

Other features such as a Smart Selfie Angle, Single Take Photo, and a Pro Video are also tipped. A teardown of Samsung’s Camera app in November hinted at a Director’s View that could do a job similar to that of the Filmic Pro by letting users jump from one camera lens to another. The fresh report mentions that the advanced option seems to be missing from the pre-production unit of the Galaxy S20 .

Alongside the Galaxy S20 and other Galaxy S20 models, Samsung is likely to bring the Galaxy Buds at its forthcoming Unpacked event. The new earbuds were initially supposed to take on Apple’s AirPods Pro with active noise cancellation (ANC) support. However, SamMobile reports that there won’t be ANC on the new model.

The Samsung Galaxy Buds are also said to include an 85mAh battery, larger than 58mAh package available on the original Galaxy Buds. The new battery pack is said to provide 12 hours of backup on a single charge. This could be nearly double than what the Galaxy Buds offer today.

Samsung is expected to detail its developments around the Galaxy Buds while showcasing the Galaxy S-series flagships at its Unpacked event on February 11. In the meantime, it is safe to expect some new rumours surfacing on the Web.

Poco X2 Launch Next Week: Price in India, Specifications, and Everything Else We Know Right Now