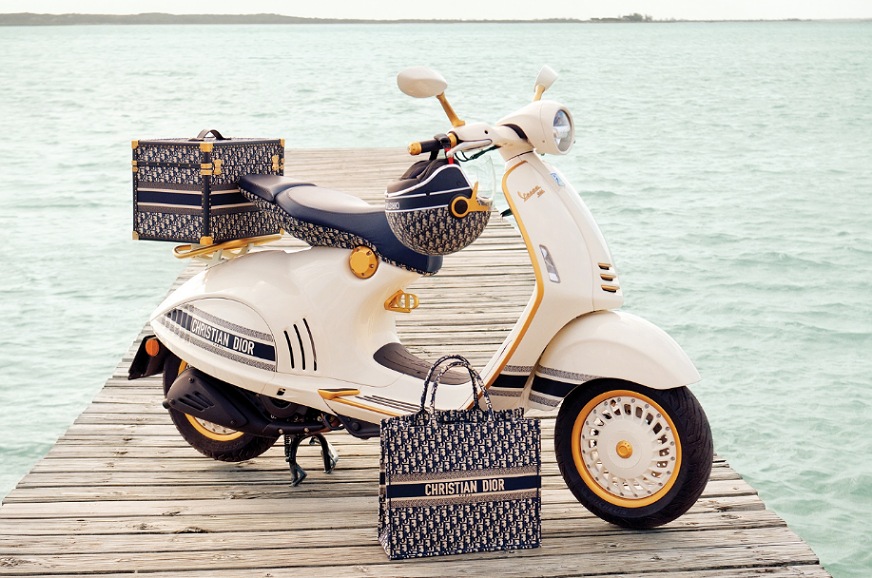 Piaggio Vespa and Parisian fashion house Christian Dior have come together to build the limited-edition Vespa 946 Christian Dior, a luxury scooter that pays tribute to both brands.

Vespa, in essence, sent the 946 to Christian Dior’s creative director, Maria Grazia Churi and gave her a free hand. The result is a Vespa that speaks of the design ethos of the famous fashion brand.

The Vespa 946 Christian Dior gets a beige paint with contrasting blue leather seats, gold trims on the wheels, mirrors, handlebar ends and luggage rack, among other areas. Then there is the generous smattering of Dior’s iconic oblique motif across the front mudguard and body panels. And if that’s not enough, the scooter is also available with optional accessories such as a half-face helmet, top box and bag patterned with the Dior oblique mark.

Mechanically, the scooter is identical to the standard Vespa 946. It is powered by a 125cc, three-valve, air-cooled engine that develops 11.8hp and 10.33Nm or torque.

As you can imagine, this collaboration between two big brands, both incidentally formed in 1946,  means the asking price of the Vespa Christian Dior will be pretty steep. The exact price hasn’t been announced, but for reference, the Vespa Giorgio Armani edition was priced at a whopping Rs 12 lakh, when it was launched in 2016.

The scooter will be available from March 2021 at select Christian Dior boutiques, followed by Piaggio Motoplex outlets. While there is no word on its India availability yet, Piaggio might just bring the Vespa 946 Christian Dior to our shores, like it did the Giorgio Armani edition a few years ago.