OnePlus on Tuesday unveiled the new OnePlus 8 and OnePlus 8 Pro smartphones and the phone are all over the news. Apart from the new OnePlus 8 series, the company also announced several improvements to its OxygenOS operating system, based on Android. While it hasn’t revealed all the changes, the company has claimed that it has added 280 new optimisations to OxygenOS to make it smoother. OnePlus did detail some key features that will be a part of OxygenOS on OnePlus 8 series.

The new OxygenOS features detailed by the company during the launch event and on its website include Smooth Battle 2.0, New Dark Theme, Dynamic Wallpapers, Live Caption, Alexa Built-in, improvements to Gallery app, Messages app, along with deeper customisations. So, here’s what all has been improved in OxygenOS:

OnePlus claims to have made 280 software optimisations to OxygenOS to “ultra-fast and seamlessly smooth,” according to its website. While the company did not go into detail on what exactly it did, it can be assumed that OnePlus worked on the animations and scrolling, among other things, to make the phones feel faster and smoother. And, OnePlus’ OxygenOS is known for its close to stock Android and bloatware-free experience. The OnePlus 8 comes with a 90Hz display while the OnePlus 8 Pro comes with a 120Hz display that make the phones feel even faster.

Talking about the new Dark Theme at the event, the company stated that it has “refreshed it for the OnePlus 8 Pro.” The New Dark Theme is compatible with a wide range of third-party apps as stated on the website. Dark Mode has been introduced by almost all manufacturers due to its relatively lower battery consumption and the fact that it causes less strain on the eyes. 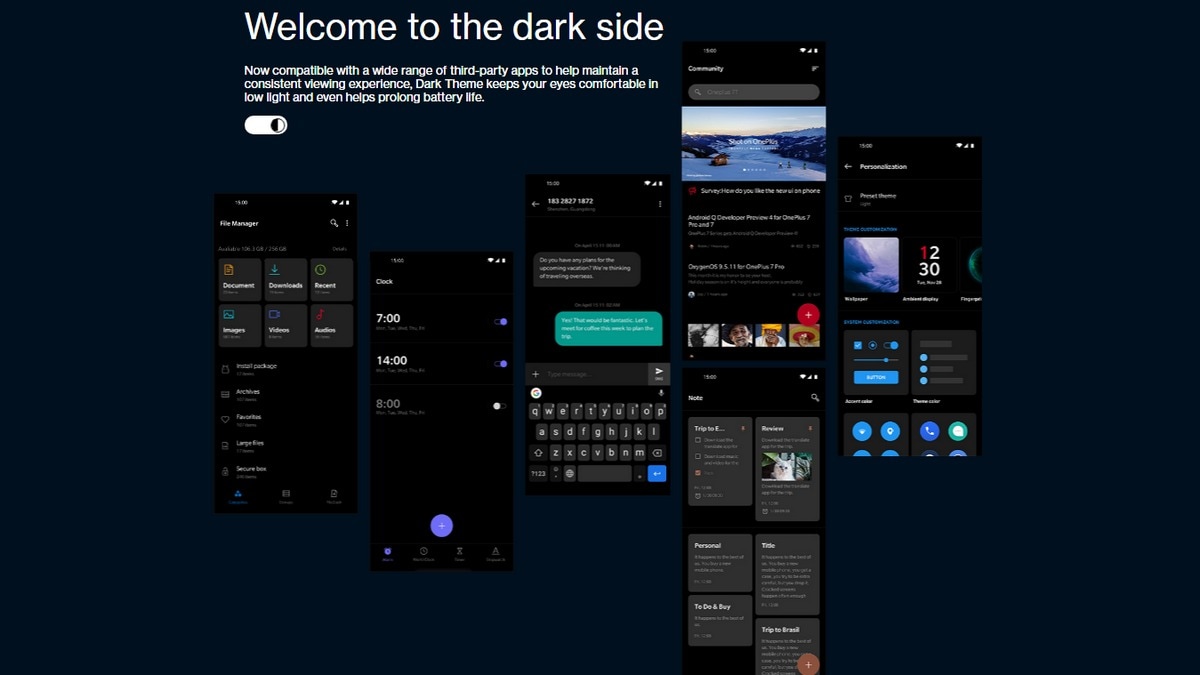 Dark Mode in OxygenOS has been “refreshed”
Photo Credit: OnePlus

OnePlus has introduced new dynamic wallpapers that will change according to the weather. The company states that Live Wallpapers can connect to the OnePlus Weather app and change hues according to real-time weather conditions. This will bring “your smartphone experience closer to the environment around you,” OnePlus adds.

OnePlus has worked with Google to bring Live Caption feature that provides video and audio captions in real-time. This is a feature that was previously exclusive to Pixel phones but has been rolled out to OnePlus 7T Pro and OnePlus 7T as part of the OxygenOS Open Beta.

The company also announced that it has worked with Google to give an extended 100GB of Google cloud storage for the OnePlus 8 series buyers.

The other improvements include deeper customisation options, an improved OxygenOS Gallery with Smart Albums, a ‘Work Mode’ and ‘Life Mode‘ to maintain work-life balance, changes to the Messages app to help declutter all the messages, and Cricket Card 2.0 with real-time updates in the OnePlus Shelf.