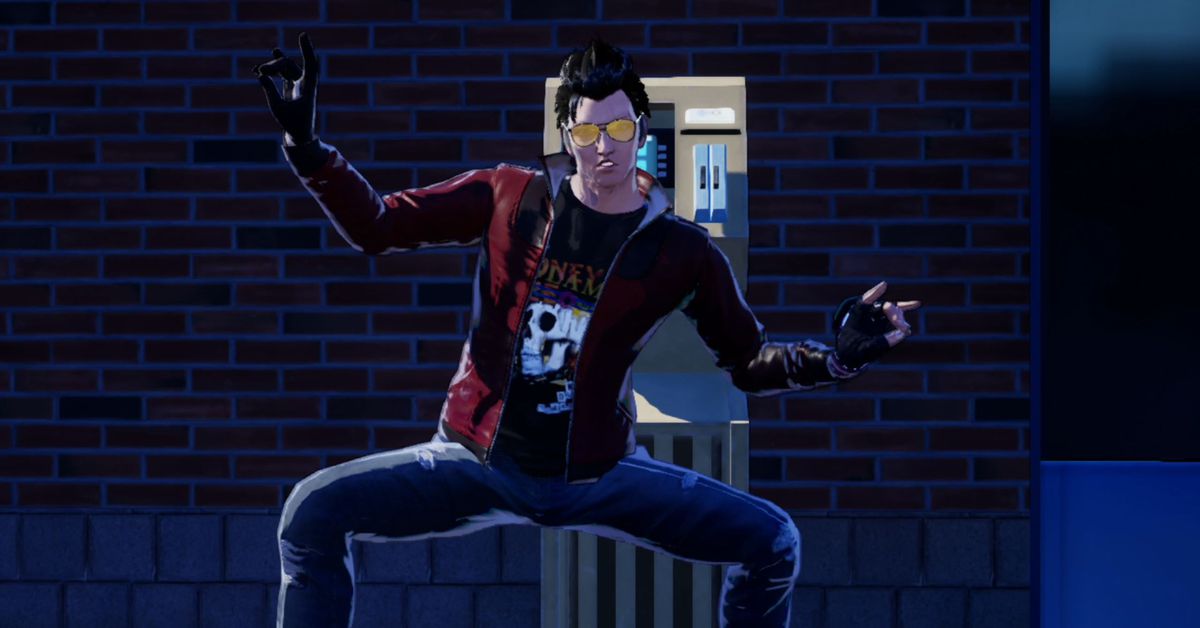 
No More Heroes 3 is made out of lots of messy pieces. It’s a hyperviolent and crass hack-and-slash action game with mediocre combat. It’s an open-world game with a barren, flat world. It’s a pop-culture reference fest at a time when crossovers between major franchises aren’t all that special. It’s crammed full of dissonant aesthetics, with pixels and VHS tape decay rubbing up against anime and photomontage art. That messiness can be jarring and occasionally tedious, but it’s also what makes No More Heroes 3 a fascinating and off-kilter game.

In its first hour, you watch a surprisingly lavish animated sequence chronicling the backstory of the main antagonist, intergalactic warlord Jess-Baptist VI, also known as FU. As FU’s alien armies invade Earth, No More Heroes 3 throws you into a combat tutorial. The rest of the intro (and the entire game) plays out like an anime series, complete with an amazing opening title sequence and chapters divided up by credits sequences that end with a Netflix-style “next episode in 3… 2… 1…” After the intro “episode” plays out, you watch protagonist Travis Touchdown and his friend Bishop nerd out about their favorite Takashi Miike films for a while. Then you’re thrown into the game proper. It all feels like some multimedia art project that just happens to include interactive elements.

Which is good, because most of what you do between these entrancing stylistic flourishes is bog-standard hack-and-slash combat and open-world side missions. Instead of working his way up the United Assassins Association rankings just to become the world’s greatest killer, Travis has to stave off an alien invasion by working his way up the rankings again, now filled with FU’s top cronies. He still has to pay to enter each boss fight, though, which means he has to earn cash in the game’s open world by completing minigames and fighting off alien fodder.

These fights and part-time jobs, along with some open-world exploration, make up the bulk of the game’s run time. Most combat missions have you facing off against two or three waves of two to five enemies apiece. Early fights take as long to enter and exit as they do to complete, thanks to both the brevity of the fights and longevity of the transitory animations and loading screens. During the actual fights, it feels good to string together light and heavy attacks, throws, and special “Death Drive” moves to melt down enemy health bars, but the combat can also feel finicky. Special moves often whiff, and enemies can hit you while you’re knocked down or even in the middle of the cool-looking slowdown effect that happens whenever you dodge an enemy’s attack.

The big draw of previous No More Heroes games was the ranking fights, the big boss battles that bookended the open-world and combat grinds. In No More Heroes 3, they’re no longer the main event. Even though the new crop of assassins is made up of outlandish aliens, they’re pretty bland compared to past games’ villains. A few of them spark some genuinely novel fights — one involves a rendition of musical chairs, for example — but they’re often dwarfed by the overarching conflict between Travis, his friends, and FU.

The town of Santa Destroy isn’t what it used to be, either. It’s been replaced by five smaller open-world areas that parody other game franchises; for example, one area filled with bombed-out buildings and trenches is called “Call of Battle.” The textures in these worlds look muddy, and the outside sections look uninspired and lifeless, which makes exploring these areas to find all of their secrets feel dull.

So the fights, minigames, and open-world exploration aren’t compelling. But No More Heroes 3 is so good about making everything you do feel cool that it almost doesn’t matter. I never dreaded scrounging up funds for the next ranking fight; the game makes the act of mowing lawns, picking up trash, and raising “traffic safety awareness” by ramming cars in racing events surprisingly stylish. The trash collecting minigame even lets you suplex a few alligators as you wade through submerged landfills. I wasn’t into combat for the actual fighting so much as how vibrant it looks and sounds — a powerful stinger ends each encounter with the word “KILL” written in giant, bold, pixelated text as a shredding guitar riff plays. The soundtrack is basically all bangers. These disparate bits of cool are small, but the game is so stuffed with these fantastic touches that it’s a joy just taking in its vibes. The more mechanical elements here are like scaffolding to support the delivery of those vibes, and somehow, it works.

Throughout it all, you’re watching Travis and Bishop espouse their love for their favorite movies, comics, and TV shows through the sheer number of references on display. That love of nerd culture, one of the linchpins of No More Heroes’ style, resonates differently in 2021. When the original game was released in 2008, the idea of a stylish action game in which you played as an unrepentant otaku like Travis still felt novel. His cramped motel room apartment full of posters, luchador masks, and anime statues stood in contrast to the puckish affectations of numerous other “everyman” murderers like Uncharted’s Nathan Drake. Having an interlude in which you played a shoot-’em-up game based on a fictional magical girl anime was a genuine surprise. It was a game about how cool it was to be a nerd that hit right before the first MCU movie, Iron Man, came out. Nerddom wasn’t marginal, but it was going to take a little longer for it to be truly mainstream.

Nowadays, Doja Cat is a gaming ambassador for her fans. Henry Cavill builds his own PCs and isn’t shy about it. You don’t have to be sly about how much of a nerd you are. The kinds of references No More Heroes makes are downright subtle in a world where Superman is throwing down with Master Chief in Fortnite, RoboCop is firing rockets at the Terminator in Mortal Kombat 11, and Ready Player One exists. So when an enemy in No More Heroes 3 hatches from the same eggs that birthed Alien’s Xenomorphs, or guide character Sylvia Christel shows up as a Captain Marvel or Bond Girl knockoff for no explicable reason, the novelty barely registers.

The game’s love of nerd culture resonates differently in 2021

No More Heroes 3 works best when it’s delving deep into its own particular rabbit holes. When Travis and Bishop geek out about their shared interests, for example, it plays out like a talk show; you watch them chat through an old-school TV, with Akira Toriyama-esque caricatures popping up as the dials turn. They wax at length about the genius of Takashi Miike, name-dropping Ichi the Killer, 13 Assassins, and Visitor Q. They talk about tokusatsu series; they casually bring up Armored Trooper Votoms. These sections illustrate the passion that comes from loving a piece of art, and you can tell these references are there not because of some corporate tie-in, but because the people making this game really love this stuff and want to share it with the world.

The references don’t always land, though, and because the game is throwing them out so frequently, No More Heroes 3 is often only as good as the last clever trick it’s pulled off. At its worst, it can seem like a condemnation of the very kind of otaku culture it’s trying to celebrate, as if developer Grasshopper Manufacture caught me making a pop culture reference and forced me to smoke a whole pack of them. At times, the deluge of references gets so frequent as to become meaningless, especially when compared to the game’s more elaborate nods.

When its novelty and style wear off, No More Heroes 3 doesn’t have much to fall back on. Because the game is so obsessed with showing you how other things are cool, there’s nothing to hold onto when the time comes for its finale to cash in on the story that it was too distracted to really tell with its own characters and world. Characters from previous games are joined by brand-new ones who show up out of nowhere, only to be tossed aside and forgotten moments later. The ending falls completely flat because, in its haste to get you to remember how much you love a bunch of other movies, music, shows, and games, the game forgets to tell you to care about itself.

But you don’t play a No More Heroes game for its story. You play it for its style, and No More Heroes 3 has style in spades. The best thing I can say about No More Heroes 3 is that its combat and open-world design stay out of the way, letting its style take center stage, occasionally facilitating some truly great one-off moments. Its clashing styles, tricks, and references are a testament to the powerful draw of the superficial — yet somehow, it manages to be earnest about its love for pop culture and art in a way that still feels special, even amid our current metaverse hellscape. I know it worked because I’ve started looking into Takashi Miike films. They sound pretty cool.

No More Heroes 3 launches Aug. 27 on Nintendo Switch. The game was reviewed using a pre-release download code provided by Grasshopper Manufacture. Vox Media has affiliate partnerships. These do not influence editorial content, though Vox Media may earn commissions for products purchased via affiliate links. You can find additional information about Polygon’s ethics policy here.