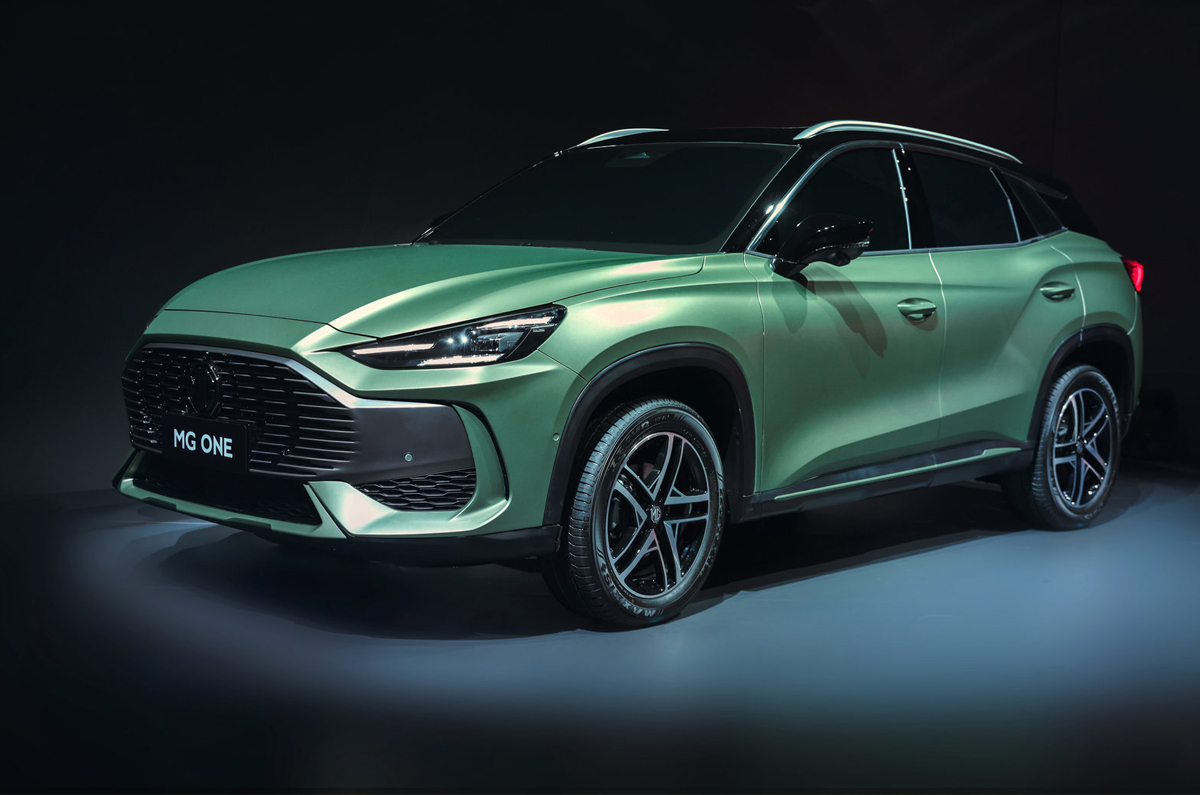 MG Motor has finally taken the wraps off its latest SUV, the MG One, which the brand claims showcases its new architecture and design language. The MG One is based on the brand’s new SIGMA architecture, which is an all-in-one modular designed platform, and will further the company’s design and technological prowess.

MG One: design and styling

The MG One has been unveiled in two versions – Fashionable and Sporty – which are further characterised by two distinct paint shades – Bubble Orange and Wilderness Green. Both versions of the MG One feature a three-dimensional grille, but the radial pattern on Fashionable gives it an aggressive look, while Sporty features a more sophisticated and comparatively subtle grille design.

Likewise, the front bumper also differs in design on the two MG One versions. The sharp LED headlamps with integrated LED DRLs further add some character to the front fascia of the SUV. The MG One features a sloping roofline at the rear, giving it a coupe-like silhouette. The distinct pattern on the D-pillar and the chrome border above the window line also stand out in profile. The silver roof rails, pronounced rear haunches and plastic cladding over the wheel arches and along the sides give it a muscular and brawny appeal.

The otherwise simple rear end of the MG One is characterised by a black spoiler with a cut-out. It also gets a pair of sleek LED tail-lamps, a tailgate-mounted number plate recess and some more plastic cladding on the rear bumper. Both versions of the MG One also get unique, stylish alloy wheel designs. MG, however, hasn’t revealed any images of the One’s interior.

MG One: platform and technology

The SIGMA architecture is an all-in-one modular platform, which means it can support a variety of powertrains, including a range of all-electric and hybrid powertrains, as well as regular internal combustion engines. The platform is also extremely adaptable and can be used to create a variety of body styles, such as hatchbacks, sportscars, off-roaders, SUVs, etc.

Although MG hasn’t revealed the interior or the features that would be on offer, the company says the SUV features an “advanced electric architecture”, an “active digital ecosystem” and “hard-core software technology” with powerful chip technology. All this only hints that the One could be loaded to the gills with the latest features: from semi-autonomous tech to the latest in infotainment and connected car technologies.

As per leaked documents, the MG One will likely be powered by a 1.5-litre turbo-petrol engine that will come paired to either a 6-speed manual or a dual-clutch automatic gearbox. The engine is likely to make around 170-180hp and 250-260 Nm of torque. The MG One will go on sale globally by the end of the year, but it is unlikely to make it to India.

Coming to MG India, the next launch for the market is expected to be the petrol derivative of the ZS EV. The new SUV will be the facelifted ZS that’s on sale in international markets. It will feature updated styling and is expected to be rebadged as the Astor, to set it apart from the ZS EV. It is slated for launch in Q4 of 2021.

Mahindra Open To Exiting SsangYong, Looks At Bringing In A New...

[email protected] - June 1, 2020 0
Oppo is working on the successor of the Reno 3 series, and we have already seen multiple leaks featuring phones from the upcoming...

Branded Content: Here’s what you should know before you file your...

Petrol, Diesel Prices Revised For the Eighth Day In A Row

Samsung Galaxy Note 20 to Get a Bigger Battery Than Galaxy...