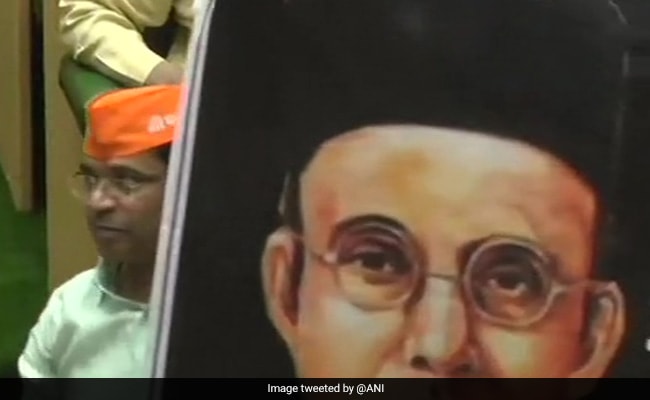 BJP MLAs shouted slogans against Rahul Gandhi outside the assembly.

The BJP on Monday launched a protest inside the Maharashtra Assembly against Congress MP Rahul Gandhi over his recent remark that he would not apologise for his “rape in India” comment as his name was not Savarkar.

Wearing saffron caps with “I Am Savarkar” message in Marathi, party MLAs carried a portrait of VD Savarkar to the House, marking their protest. They also shouted slogans against Mr Gandhi outside the assembly.

Reacting on the BJP’s demand of an apology over his “rape in India” remark, Mr Gandhi said at a rally last week that he would not apologise as he was not Savarkar.

“My name is not Rahul Savarkar, I am Rahul Gandhi. I will never apologise for speaking the truth and nor will any Congressman do so. It is Narendra Modi and his assistant Amit Shah who has to apologise to the country for destroying India’s economy,” he had said in his opening remarks at the party’s mega rally in Delhi’s Ramlila Maidan on Saturday.

Objecting to the remark, the Leader of Opposition in Maharashtra, Devendra Fadnavis had demanded that Mr Gandhi must apologise.

The Congress’s ally in Maharashtra, Shiv Sena, had also slammed the remark, saying VD Savarkar must not be “insulted”.

“We respect Pandit Nehru and Mahatma Gandhi. You should not insult Veer Savarkar. No further explanation is needed for anyone sensible,” Sena MP Sanjay Raut had tweeted in Marathi.

“Veer Savarkar is God not just for Maharashtra but for the nation. His name is tinged with national pride and self-respect. Like Nehru and Gandhi, he dedicated his life to achieving independence. All such gods should be respected, there is no compromise on this,” he had added.

With inputs from PTI