Lenovo K11 Power will reportedly be launch as a rebranded version of Moto G8 Power Lite. According to a tipster, the Lenovo K11 Power was spotted on Google Play Console with the phone moniker highlighted as “Motorola moto g(8) power lite Lenovo K11Power.” The Moto G8 Power Lite moniker is also separately noted in the screenshot of the listing. The phone is listed with 4GB of RAM and MediaTek Helio P35 SoC. It is important to note that Lenovo is yet to confirm the development of Lenovo K11 Power therefore, it is advisable taking the information with a pinch of salt.

As per the alleged Google Play Console listing shared by tipster ‘Tamilan Techinical’ on Twitter, the Lenovo K11 Power seems to have an HD+ (720×1,600 pixels) display with 260ppi of pixel density and MediaTek Helio P35 SoC, paired with 4GB of RAM. The phone also appears to run Android 9 out-of-the-box. Notably, the Moto G8 Power Lite that was launched in April packs the same set of specifications. 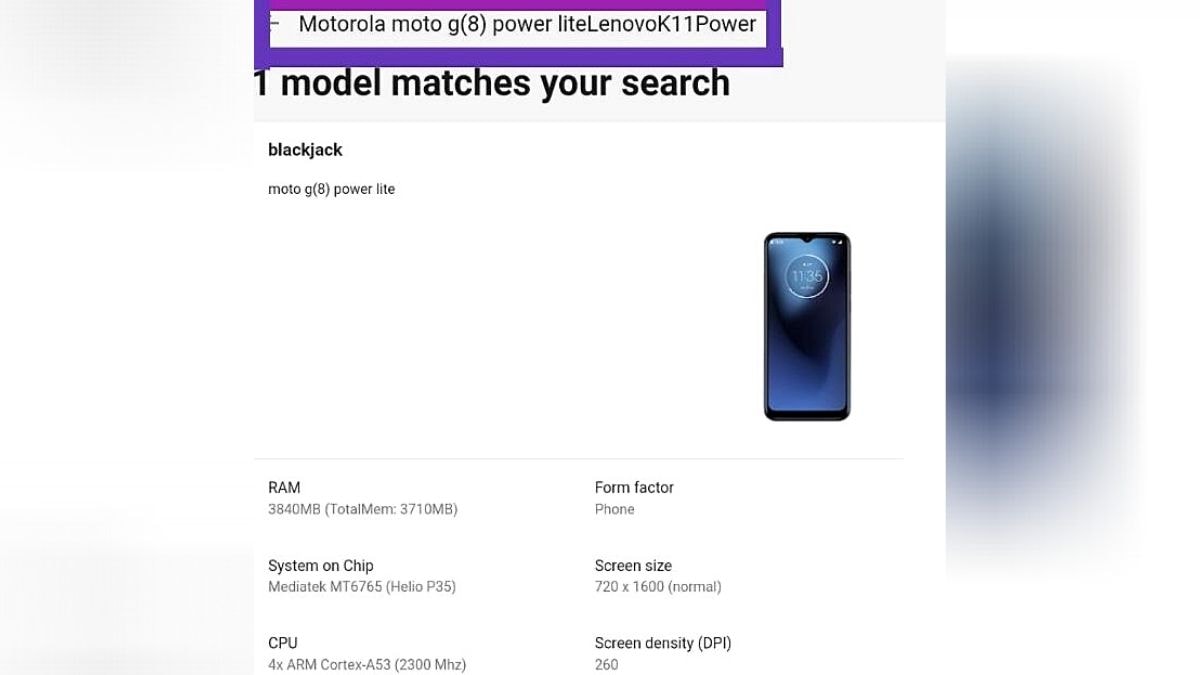 To recall, the Lenovo-owned Motorola phone runs on Android 9 and features a 6.5-inch (720×1,600 pixels) IPS LCD display. It is powered by MediaTek Helio P35 SoC paired with 4GB of RAM. It carries a triple rear camera setup that includes a 16-megapixel primary camera and two 2-megapixel cameras. There’s also an 8-megapixel front camera for selfies and video calling, housed inside the waterdrop notch.

The Moto G8 Power Lite also packs a 5,000mAh battery with 10W charging support. The onboard storage of 64GB is expandable via a microSD card (up to 256GB).

The 4GB + 64GB model of Moto G8 Power Lite was launched in India in May. The phone is currently priced at Rs. 9,499 and available in Arctic Blue and Royal Blue colour options. Given the Moto G8 Power Lite is already sold in the country, the Lenovo K11 Power is unlikely to make its way to India.