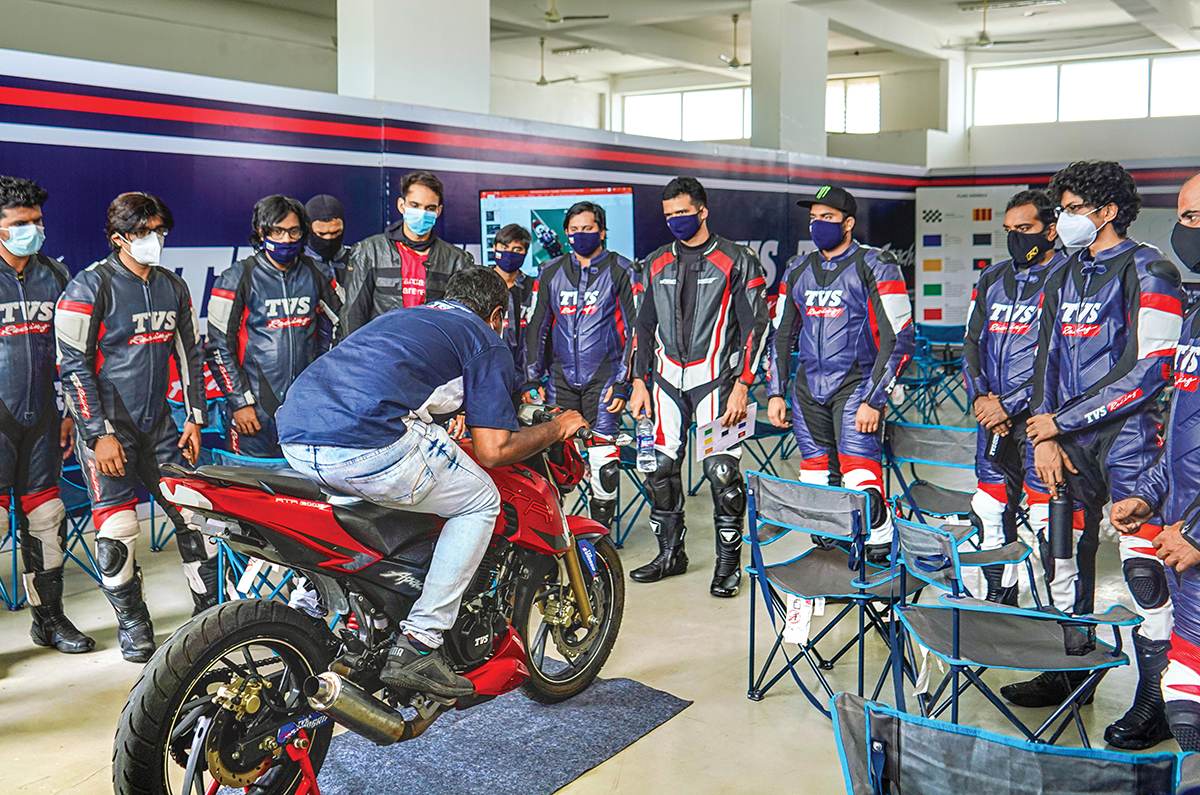 
Motor racing is something I’ve been in awe of, ever since I was little. To me, it represents man and machine working in harmony to extract the maximum performance out of both, in pursuit of glory. It is also one of the big reasons why I decided to become a motoring journalist, to experience the world of motorsports from as close as possible.

And there won’t be a closer way to experience that than taking part in the TVS Young Media Racer Programme (YMRP), for which I was drafted in to represent Autocar India. The TVS YMRP, now in its fifth iteration, lets participants from various print and online media houses have a proper go at racing from the saddle of a race bike. Mind you, this was just the training and qualifier round. Only the Top 12 riders out of the 15 participating would be selected to take part in three race weekends, which would take place over the next couple of months. So, the pressure was on even before I touched down in Chennai.

It’s important to understand the rules and regulations before venturing out on track.

We arrived at the Madras Motor Race Track (MMRT), which is just outside of Chennai, nice and early in anticipation of the long day ahead. Our trainers for the programme were TVS Racing’s Harry Sylvester, Jagan Kumar and KY Ahmad. Harry guided us through the theory sessions, which involved understanding the flags and the rules of the racetrack. He also pointed out the ideal gears we should be in for every corner, how we should move our body while on the bike and how to approach braking. 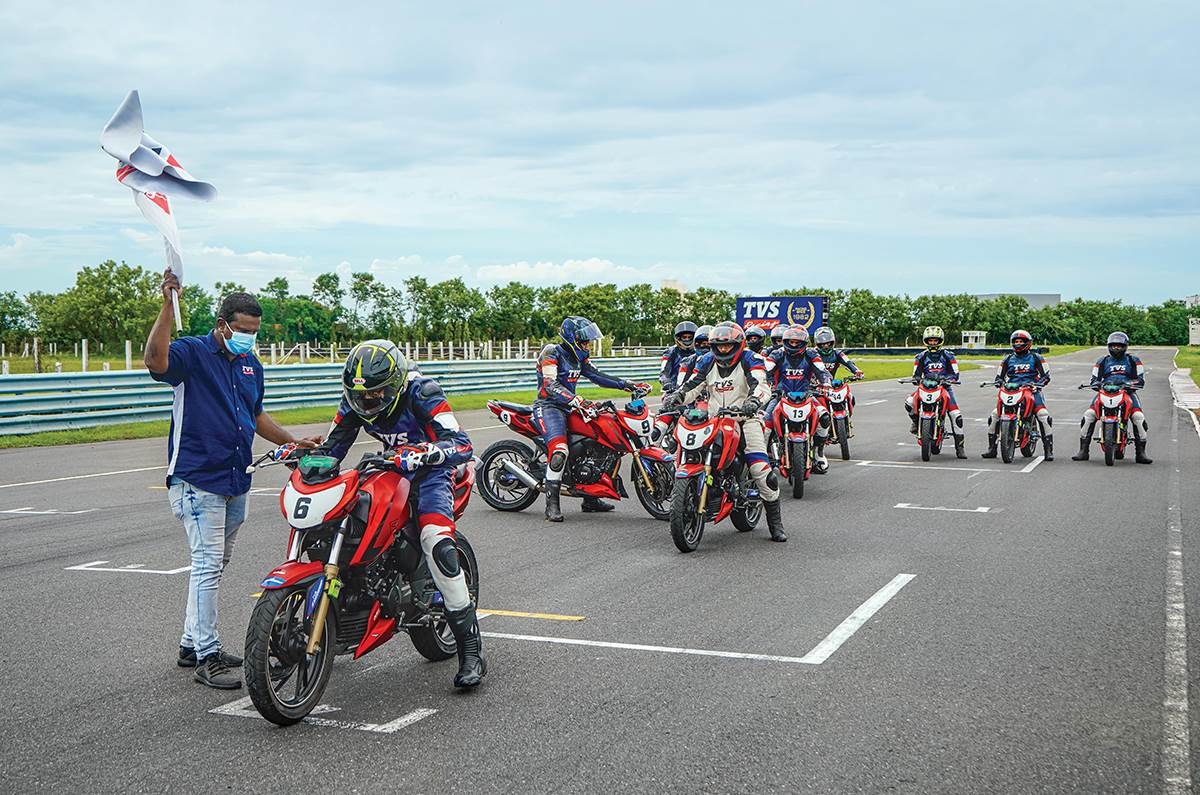 Learning how to nail the perfect race start, ahead of the upcoming races.

Following the theory sessions, we got acquainted with the machinery we’d be using. They were race-prepped TVS Apache RTR 200 4Vs with custom free-flow exhausts, tweaked suspension and new tyres, along with fresh engine internals after the previous season of racing. These bikes looked so darn cool, with the racing number an all, and sounded even better. I was just raring to have a go on them and feel like Valentino Rossi, flying around the racetrack with my knees and elbows scraping the ground. Or at least that’s the image I had in my head. But all those dreams were squashed as soon as I hit the track for our first practical training session. 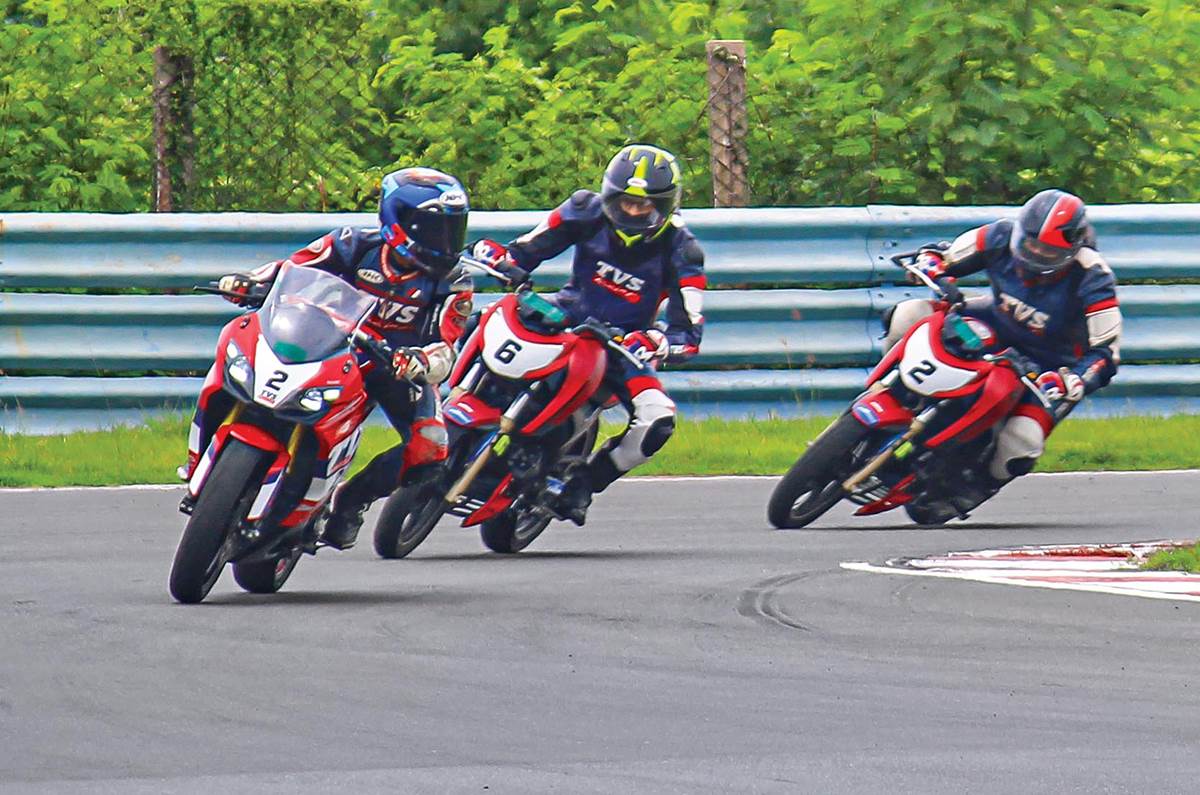 As if visiting MMRT for the first time, as well as riding a bike on the track for the first time, wasn’t enough, the track was still damp in places due to the heavy rainfall that took place the night before. This only increased the difficulty and my nervousness. The rain also meant that we would be using the shorter club circuit, instead of the full layout, as the latter part of the track still had puddles on it.

Still, I tried my best to navigate around these damp spots and follow our instructors, Jagan Kumar and KY Ahmad, who were leading on track-prepped TVS RR 310s. We shadowed the professionals for a couple of laps, who instructed us on the ideal racing lines, turn-in points and braking points around the lap. And as the laps tumbled and the track dried out, I started to get comfortable with both, the bike and the racetrack. We were then also briefed on race starts, after which the training part of the programme concluded. Following this, we were allowed 15 minutes of free practice to learn how to put a fast lap together using all the techniques we’d learnt. 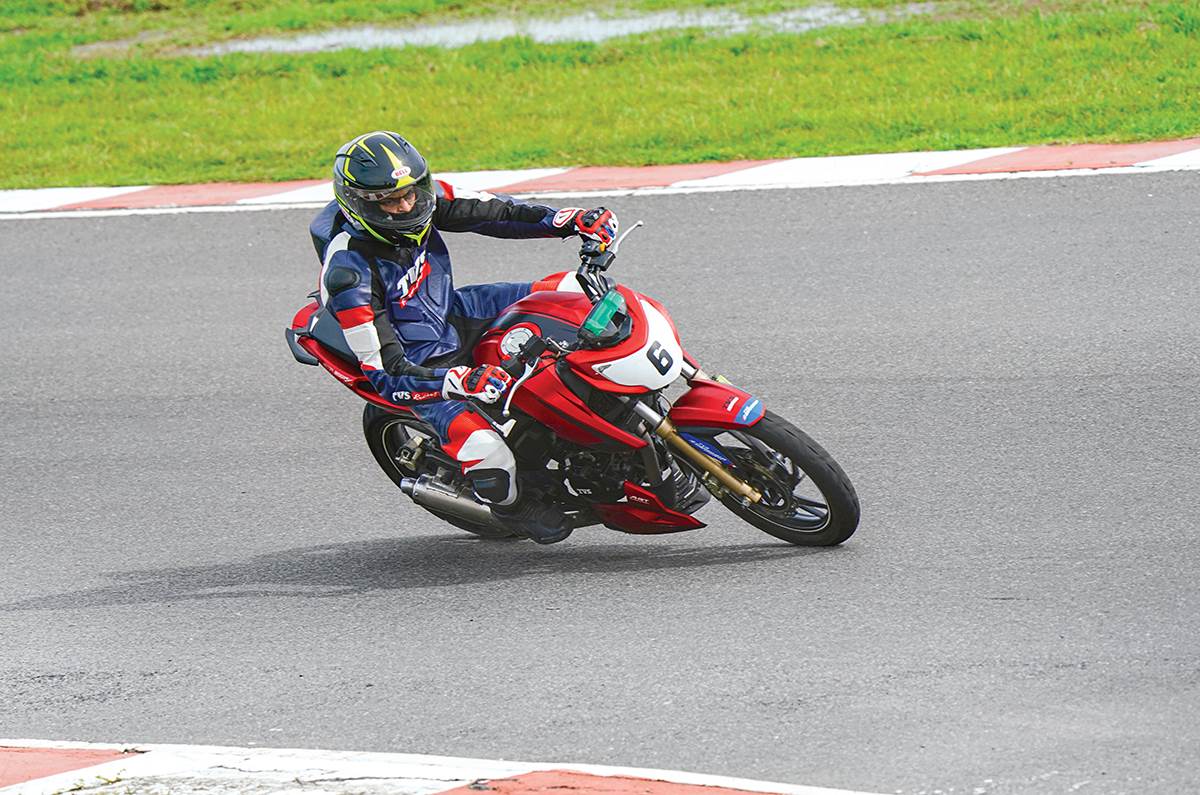 It took quite a few laps before I was able to lean this much. Now to work on the body position.

I went into the timed qualy session with the sole goal of qualifying for the next round, but I would be lying if I didn’t say that I wanted to be as high up on the grid as possible. And with my confidence growing with every lap, I did. I started pushing the limits a bit further, trying to brake later and carry more speed through the corners than before. By the end of the session, I was reasonably satisfied with my performance. 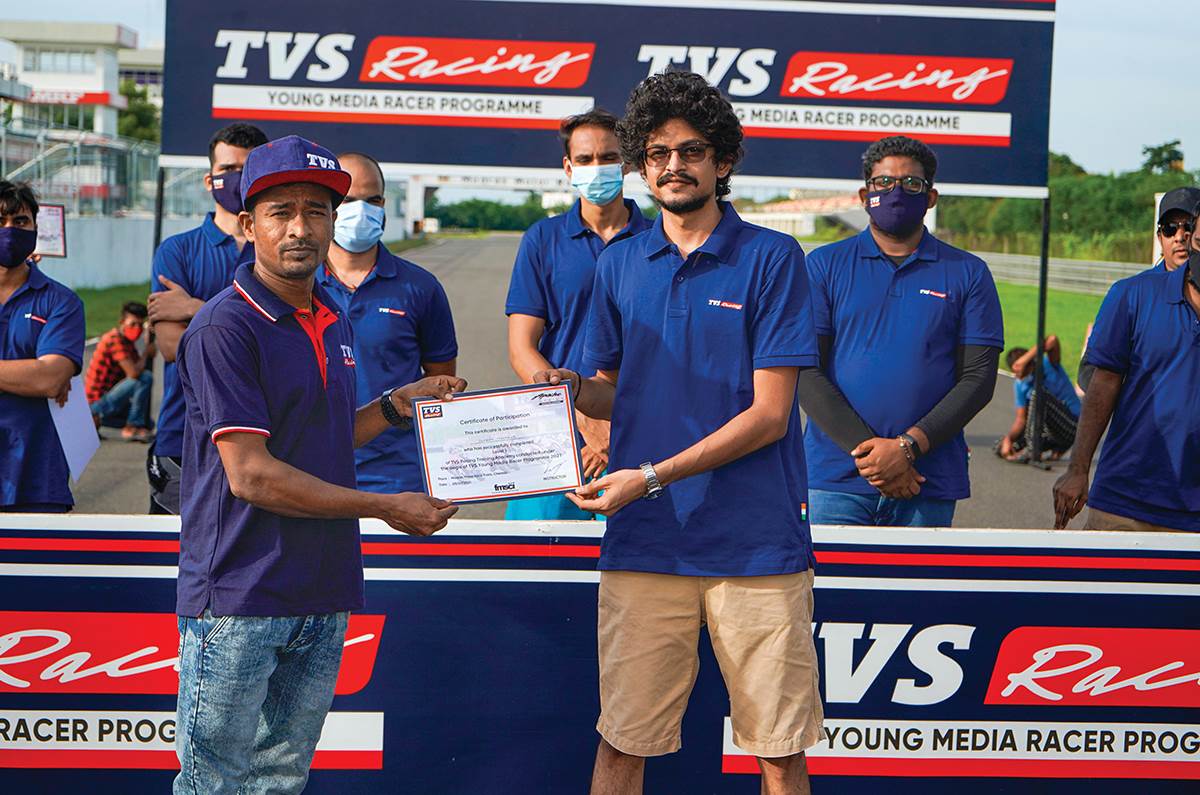 To my surprise, the results were announced and I was declared to be first, with a lap time of 1:22:688. Sure, I had the weight advantage over my fellow competitors, but I’d like to think a major reason for this result were the things I learnt during the theory and practical training of this programme. I left MMRT with a sense of achievement and feeling like I became a better rider than I was. Plus, it doesn’t hurt to have the bragging rights over your peers, even if it’s temporary. Now, I just can’t wait to be back in Chennai to take part in my first-ever race weekend. Exciting times ahead!