The Lamborghini Sian Hybrid range is the Italian Supercar maker’s fastest production car and compared to the Aventador SVJ. It can clock 0-100 kmph in just 2.8 seconds and has a top speed of 350 kmph 
Only 19 units of the Lamborghini Sian Convertible will be manufactured.

Lamborghini never fails to astound us whenever it brings a new model to the table and this time around it’s the first ever hybrid convertible supercar. The Lamborghini Sian Coupe blew our mind last year at the Frankfurt Motor Show with its razor-sharp design, when it was showcased in its Coupe version and the Convertible just makes you go weak in the knees. The Y-Shaped LED headlights grab attention at first glance, complemented by the pronounced character lines on its hunkered down hood. It takes inspiration from the Countach and has the bold and sharp design elements intact. 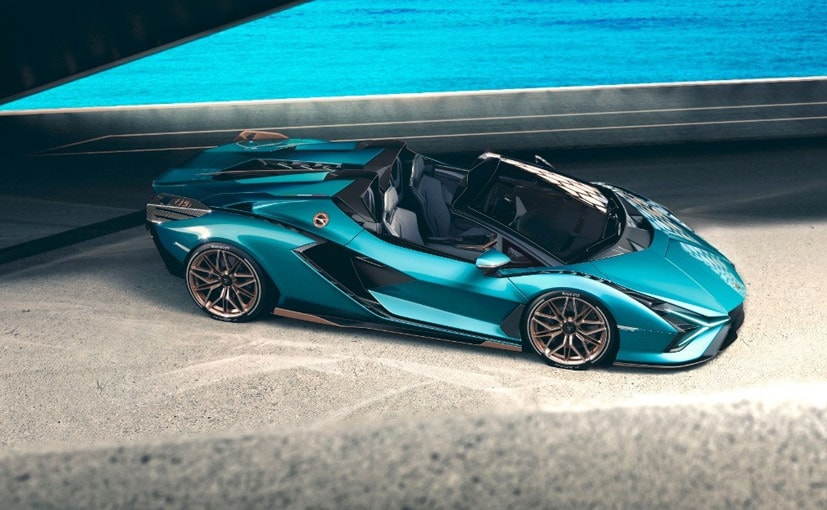 The Lamborghini Sian Hybrid is the most powerful supercar the Italian brand has ever built.

The air inlets sport the iconic Lamborghini Y shaped curtains while the lower section of the front integrates a carbon fibre splitter. The same element continues even at the rear with the taillights being fringed with Y-Shaped elements and the engine is visible through the colossal carbon fibre wing. That said, they are flanked by deep scoops that flow into a set of air vents. Impressively, even the Roadster hasn’t compromised on the aerodynamics even by an inch.

Also Read: Lamborghini SCV12 Track-Specific Supercar Will Be The Most Powerful Lamborghini Ever 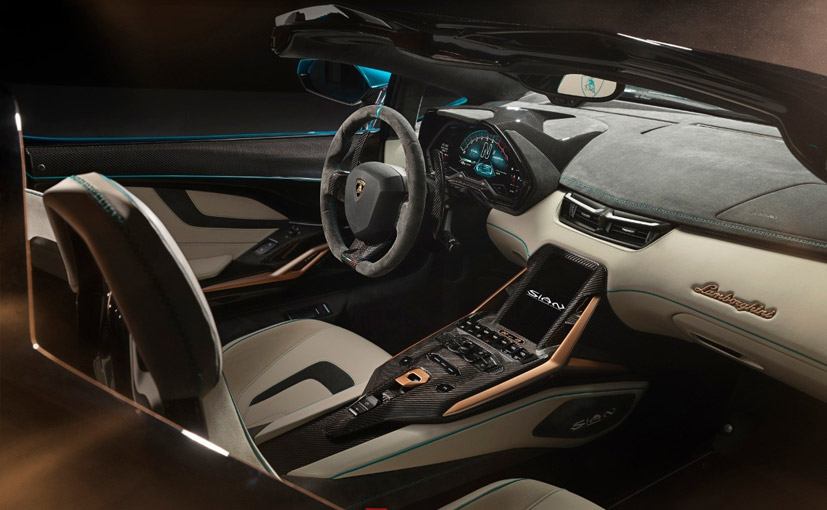 It gets a digital configurable instrument cluster, and a touchscreen integrated into the raked central console

The cockpit too is identical to what we have seen on the Sian Coupe, featuring a digital configurable instrument cluster, and a touchscreen integrated into the raked central console that displays the infotainment system designed in-house by Lamborghini. The air vents are 3D-printed which can be customised with buyers’ initials. 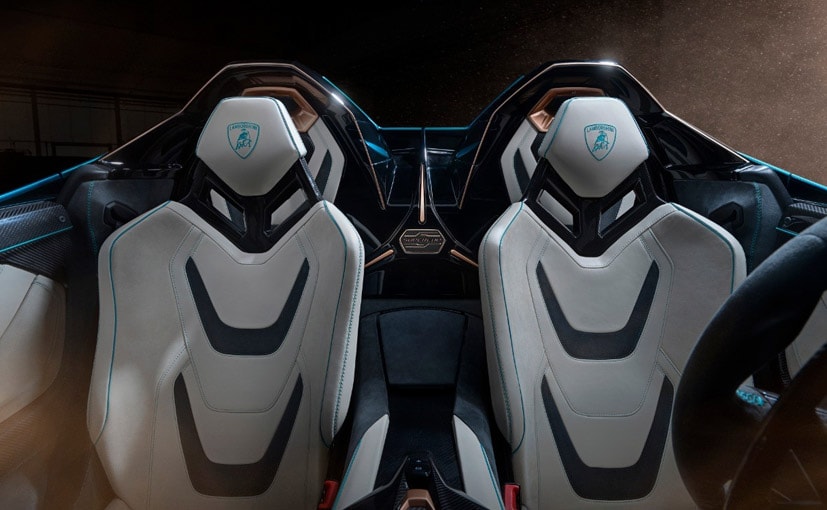 The entire cockpit can be personalized, including the upholstery.

In fact, almost the entire cockpit can be personalised, including the upholstery and the type of the materials used for the trims and that does a good job in maintaining the exclusivity of all the 19 units of the Sian Roadster, which are already sold out. 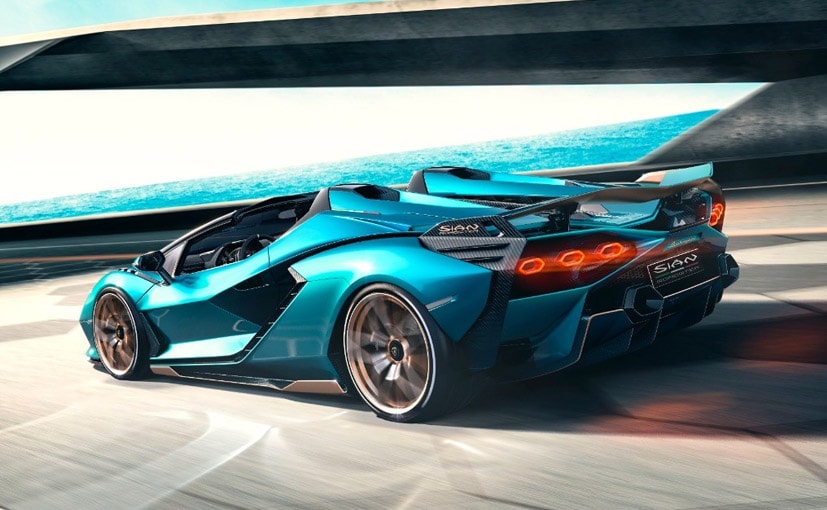 It’s also Lamborghini’s first ever hybrid car where the SVJ sourced 6.5-litre, naturally aspirated, V12 engine is coupled with a 48-volt mild hybrid system which adds 33 bhp more, taking the total maximum output to a staggering 808 bhp at 8500 rpm, enough to clock triple digit speeds under 2.8 seconds. It’s not even fraction of a second slower than its Coupe sibling. It is the most powerful production Lamborghini ever built and can reach a top speed of 350 kmph. With the help of a supercapacitor instead of a lithium-ion battery pack, it’s three times more powerful than a battery with an equivalent weight. 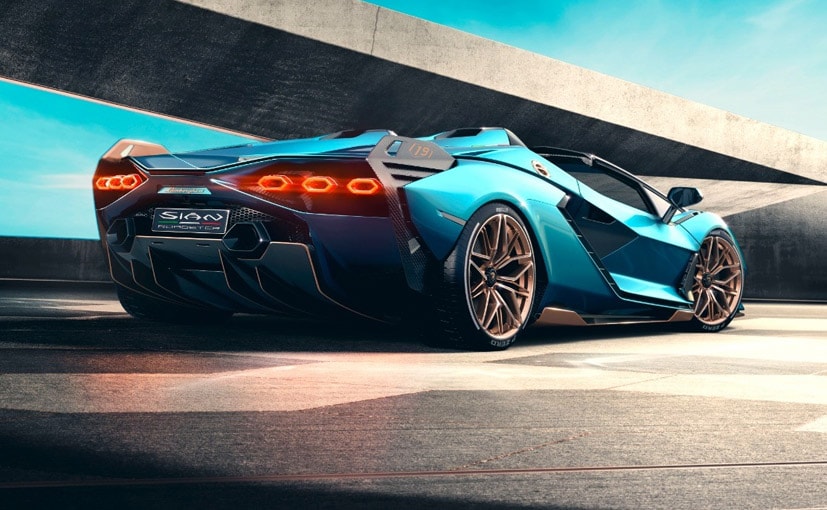 There is enough electric power on tap, letting the motor to power the Sian at extremely low speeds, like when parking or reversing. And the jolt of electric power it sends to the wheels lets it accelerate and build-up speed even when changing gears, without any shift loss. The braking system also works to completely charge the supercapacitor every time it brakes. The stored energy provides instant boost up to 130 kmph making it 10 per cent faster. The electric motor disconnects past 130 kmph and then the powertrain completely takes over. Compared to the Aventador SVJ which currently sits on Lamborghini’s throne, the Sian is 0.2 seconds faster between 30 to 60 kmph and in higher gears the traction force is increase by up to 20 per cent making it 1.2 seconds faster between 70 to 120 kmph. 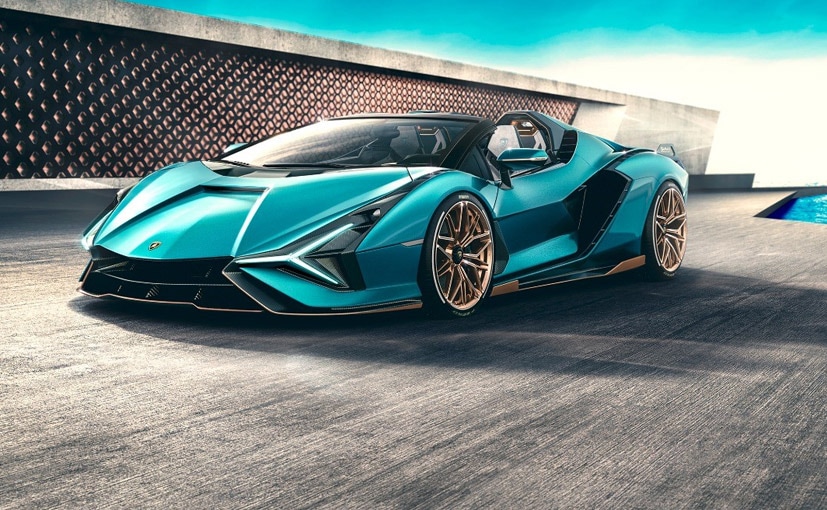 The Lamborghini Sian is 0.2 seconds faster between 30 to 60 kmph and in higher gears the traction force is increase by up to 20 per cent.

Of course, a powertrain as advanced, huge and dramatically powerful in all its glory will need a proper cooling system. So there are cooling vanes integrated into the rear end are made with a patented material that reacts to heat and they automatically open at the suitable angle when it gets hotter.