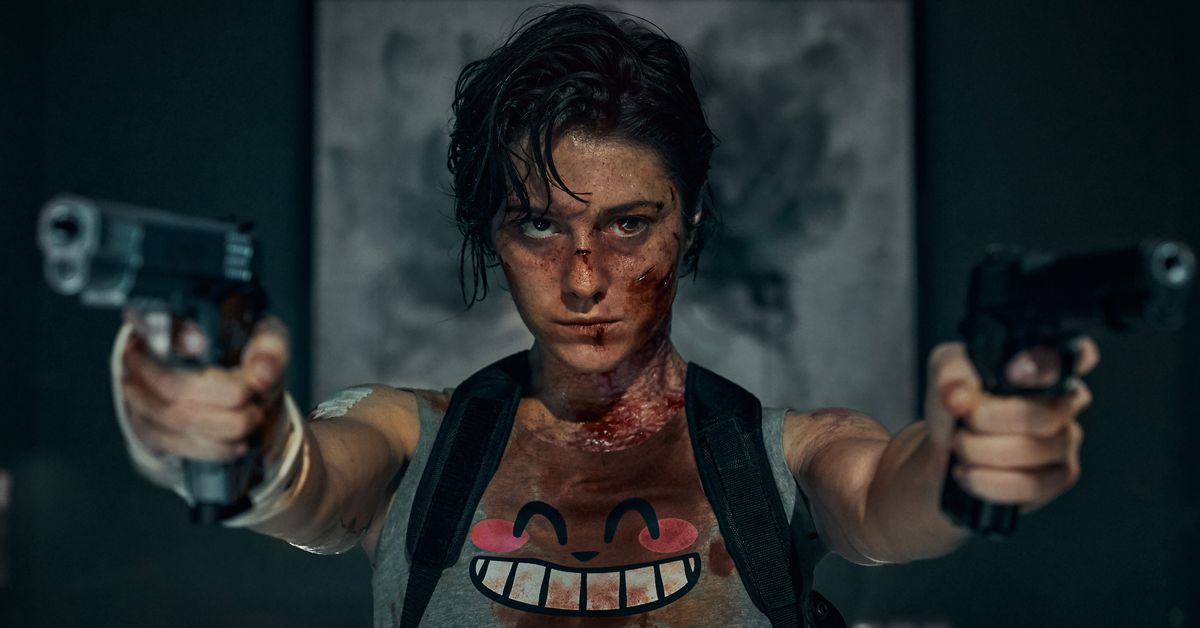 
This week saw the release of not only the exciting first look at Lana Wachowski’s upcoming Matrix sequel, The Matrix Resurrections, but the premiere of Insidious director James Wan’s latest supernatural horror thriller Malignant starring Annabelle Wallis (The Mummy). The film is also streaming on HBO Max for a limited time, but there are plenty of new and recent releases to watch this week.

Among the new additions are Mary Elizabeth Winstead stars in the new Netflix revenge action thriller Kate as an assassin hunting down the culprits responsible for poisoning her, and the new indie Western thriller Gunfight at Dry River from director Daniel Simpson follows the story of a beleaguered Mexican border town controlled by a ruthless family who look to a mysterious stranger (Fabricio Christian Amansi) for salvation.

To help you get a handle on what’s new and available, here our guide to the movies you can watch on video on demand and streaming this weekend.

Where to watch: In theaters and available to stream on HBO Max

Halloween is right around the corner, so what better way to prepare than with Saw and Insidious director James Wan’s latest spooktacular psychological horror movie about a woman (Annabelle Wallis) haunted by visions of ruthless real-life murders perpetrated by her imaginary friend? The trailer for Malignant looks absolutely unnerving, with locations melting away into nightmarish tableaus, quick deep-focus zoom shots, a creepy contortionist bodies crawling backwards into dark cramped holes. Wan’s previous work would suggest that we’re at the very least in for a solid horror flick, if not an outright franchise starter. The film itself might be a tad bit sillier than most audiences would expect, though. From our review,

Malignant is a laugh riot, both by design, and when it slows down to be more thoughtful. Its themes of family, abuse, and trauma rarely materialize into something meaningful. But at times, the film places physical anguish on full display with a gonzo sensibility. There’s cartoonish wailing and thrashing, and CGI grotesqueries that resemble winking practical creations. Wan makes a visual meal out of several scenes by sending his Steadicam zipping around the room. Maybe a more serious version of the film existed at some point in the development process, but in the version that wound up on screens, Wan’s unabashed focus on its sillier elements is what makes it worthwhile.

Where to watch: Available on Netflix

Cedric Nicolas-Troyan’s (The Huntsman: Winter’s War) action revenge thriller stars Mary Elizabeth Winstead (Birds of Prey) as Kate, a highly skilled assassin who embarks on a 24 hour manhunt to exact vengeance on the conspirators who poisoned her before her own untimely demise. Produced by John Wick and Atomic Blonde director David Leitch and featuring cinematography courtesy of Lyle Vincent (A Girl Walks Home Alone at Night, Thoroughbreds), the film looks like a standard riff off of Leitch’s previous work. At least it’s got a scene of a slick neon pink-lit sports car peeling recklessly in-between oncoming traffic and a set piece inside a bizarrely monochromatic Japanese tea room. From our review,

Another unimaginative woman-led action flick written and directed by men who telegraph their twists and lean on flashbacks instead of bothering to write character development, Kate mistakes “Women can kill just as well as men!” for some sort of new idea. It isn’t — not for Netflix, immediately following Gunpowder Milkshake, and not for other studios, with The Protégé and Jolt piling up on each other’s stiletto-clad footsteps over the past few months. The film’s depiction of Japanese culture as insularly obsessed with “honor” and dismissive of outsiders isn’t particularly fresh, either. And Western fetishization of the yakuza as businessmen with samurai swords is getting pretty uninspired as well.

Gunfight at Dry River tells the story of the denizens of Dry River, a Mexican border town at the twilight of the Old West stricken by drought and preyed upon by vicious family of cutthroat American prospectors looking to strike gold. But when a mysterious stranger (Fabricio Christian Amansi) comes to town looking to reclaim his father’s lost land, his arrival sparks of chain of events that culminates in an explosive confrontation of blood and gunfire. There’s fierce knife fights, tense shootouts, buried treasure, and ensemble cast made up of Charlie Creed-Miles (The Fifth Element), Michael Moriarty (Pale Rider), Ann Mitchell (Widows), Joshua Dickinson (Redcon-1), and more.

And here’s what dropped last Friday:

Where to watch: Available to purchase for $29.99 on Amazon Prime Video, Apple, and Vudu

The latest effort in Disney’s ongoing effort to spin every one of its notable theme-park rides into a sustainable theatrical franchise, Jungle Cruise stars Dwayne “The Rock” Johnson as Frank “Skipper” Wolff, a riverboat captain hired to transport Dr. Lily Houghton (Emily Blunt) into the heart of the exotic jungle in search of the Tree of Life. It’s not exactly Fitzcarraldo or The Lost City of Z, but it does have zombie snake-men and CG-animated leopards, plus Jesse Plemons as a German aristocrat in a submarine. From our review,

Jungle Cruise is beholden not just to the antiquated tropes of archaeological adventure movies, but also the ride’s own problematic legacy. To their credit, the filmmakers do their best to subvert that legacy. The choice to have the coveted treasure be part of the natural world, instead of the ruins of an ancient civilization already helps. But the best adaptation is that the indigenous people of the jungle are civilized, and they’re Frank’s buddies — they only attack the tourists because they have an agreement where he pays them to scare the travelers for extra thrills. The leader of the tribe — the infamous Trader Sam, originally an outdated park character — is a woman in the movie. She doesn’t get a lot of screen time, and is more of an Easter Egg than a woman of color with a story of her own, but at least the filmmakers are acknowledging the ride’s past and considering how to modernize their thinking.

Where to watch: Available to stream on Amazon Prime Video

Not to be confused with the 2015 adaptation of Disney’s 1950 animated fantasy film, Kay Cannon’s Cinderella is a modernized version of the original fairytale by Charles Perrault starring singer Camila Cabello as a young orphan who lives with her abusive stepmother and stepsisters who murdered her father for his fortune. While a few of us around Polygon enjoyed this rewired take, our reviewer wasn’t as keen on it. From our review:

Lip service about feminism abounds in Cannon’s script, with speeches about self-love, social justice, and standing up to men in power. But the narrative undercuts these platitudes. Cinderella’s success as a dressmaker comes because of her proximity to wealth. Even her “Fabulous Godmother” (Billy Porter) recognizes that, declaring, “Rich people… will change your life!” He also insists she wear uncomfortable high-heeled glass slippers, because “Women’s shoes are as they are. Even magic has its limits.”

Afterlife of the Party

Where to watch: Available to stream on Netflix

Filmed during the pandemic, director Stephen Herek’s Afterlife of the Party stars Victoria Justice (Victorious) as Cassie, a self-obsessed social butterfly who throws a week-long party to celebrate her birthday … only to end up accidentally dying. Granted a second chance, Cassie must reconnect with her loved ones and right her wrongs if she’s to have any hopes at a better afterlife.

Where to watch: In select theaters and available to rent $5.99 on Amazon Prime Video and Apple

Shea Whigham (Take Shelter) stars in The Gateway as Parker, a down on his luck social worker trying to do right by the daughter of a single mother (Olivia Munn). When the child’s father (Zach Avery) returns home from prison and resumes his criminal dealings, jeopardizing the lives of his child and partner, Parker must intervene to deliver them both from a life of crime. Featuring supporting performances by Frank Grillo (The Purge: Anarchy) and Bruce Dern (Once Upon a Time in Hollywood), The Gateway looks like an explosive crime thriller anchored by stylish cinematography and reputable talent.

We Need to Do Something

Where to watch: In select theaters and available to rent for $5.99 on Amazon Prime Video, $6.99 on Apple

Sean King O’Grady’s horror-thriller We Need to Do Something stars Sierra McCormick (The Vast of Night, American Horror Stories), Pat Healy (Cheap Thrills), John James Cronin (NOS4A2), and Vinessa Shaw (3:10 to Yuma) as a family that seeks shelter in their home in the wake of an apocalyptic storm. As hours turn to days and with seemingly no-one coming to help, the family find themselves trapped and assailed by a cadre of horrors. What’s going on, and why is this happening to them? The answers may lie in a terrible secret buried in the past.

Where to watch: In select theaters and available to rent for $6.99 on Amazon Prime Video, Apple, and Vudu

Michael Greyeyes (I Know This Much Is True) stars in Wild Indian as Makwa, anglicized as “Micheal,” a man who years ago as a teenager killed another boy and covered up the murder with his friend Teddo (Chaske Spencer). After years of separation, the two men are reunited and the shared offense threatens to topple the carefully cultivated life that Makwa has built. The movie premiered out of this year’s virtual Sundance to muted acclaim, likely because the movie is intimate, brooding, and specific. For anyone looking for more indigenous perspective in their thrillers, this is one to seek out.

Where to watch: Available to stream on Netflix

Michael Keaton, Stanley Tucci, and Amy Ryan star in this taut, easily overlooked procedural from Sara Colangelo (The Kindergarten Teacher). In the aftermath of the 9/11 attacks, Congress appoints attorney Kenneth Feinberg (Keaton) to allocate the compensation fund resources for the families of the victims. Together with his firm’s head of operations (Ryan), Feinberg must do the impossible: assign monetary worth to the human lives lost in the tragedy. After being confronted by Charles Wolf (Stanely Tucci), a community organizer whose wife died in the World Trade Center, Feinberg faces a moral crisis as he works on the behalf of the victim’s families to do right by their incalculable loss. If that sounds heavy and Spotlight-esque … it is. But Keaton and Tucci make a dynamic pair, and the intricacies of the moral math problem make the fact-driven drama hit hard. In the lead up to the 20th anniversary of the September 11 attacks, Colangelo’s emphasis on the human element of the tragedy — and the families who had to make sense of it in the days, weeks, months, and years after — is vital.

Where to watch: In select theaters and available to rent for $6.99 on Amazon Prime Video, Apple, and Vudu

In Vicente Amorim’s Brazilian action thriller Yakuza Princess, Japanese pop star-turned-actress Masumi stars as Akemi, an orphan who discovers that she is in fact the heiress of a Yakuza crime organization. Bound to a mystery stranger (Jonathan Rhys Meyers) and an ancient sword, Akemi must fight to reclaim her birthright from those within the Yakuza who would rather see her dead.

Where to watch: In select theaters and available to rent for $5.99 on Amazon Prime Video; $6.99 on Apple, Vudu

Andrew Baird’s sci-fi thriller Zone 414 stars Guy Pearce (L.A. Confidential) as David Carmichael, a private detective hired by an eccentric and unscrupulous businessman to track down his missing daughter Melissa (Holly Demaine). In order to find her David will have to enlist the aid of Jane (Matilda Anna Ingrid Lutz), an advanced artificial human created by his employer. But, as with any movie about a missing person, there’s more to Melissa’s disappearance — and Jane — than meets the eye. Honestly, this looks like a not so subtle Blade Runner ripoff but the set design and lighting looks intriguing enough to give it a shot.