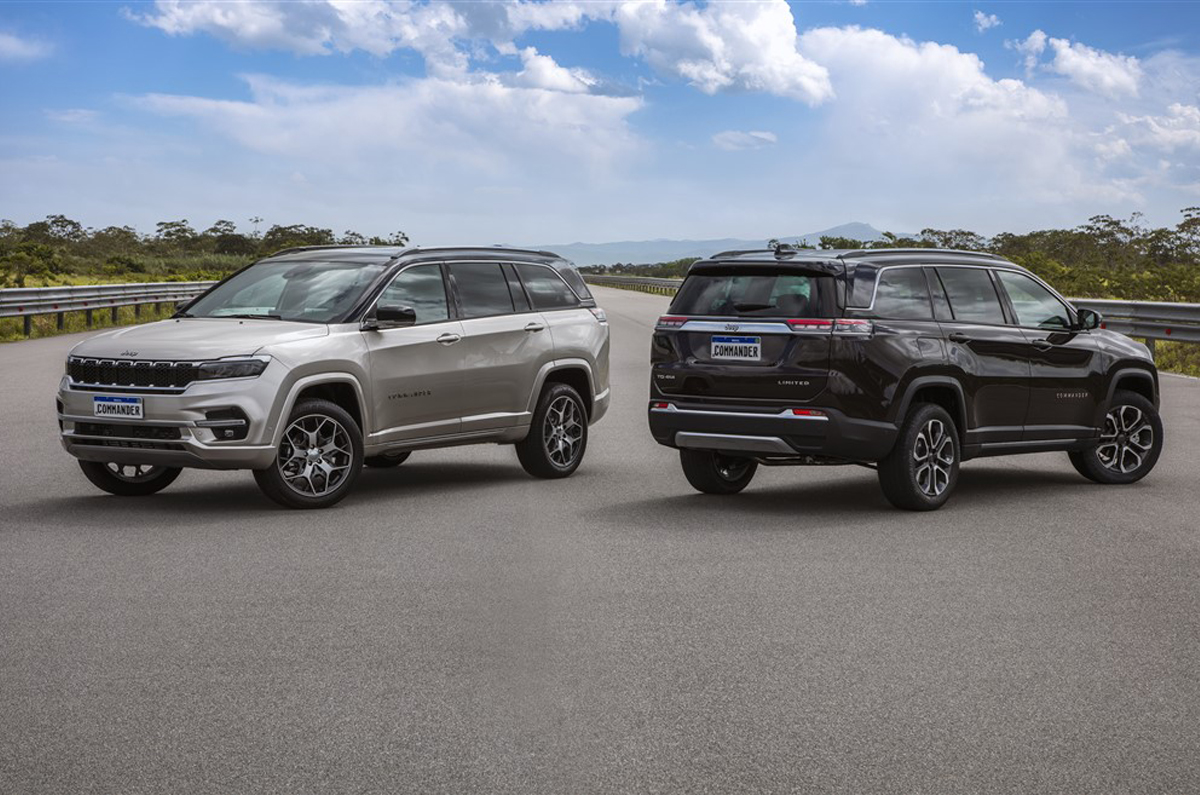 Jeep has finally revealed the Commander three-row SUV, internally known as Jeep Low-D, which will be sold in India as the Jeep Meridian. The model will first go on sale in Brazil, followed by an India launch sometime in mid-2022.

The Commander has been spied testing in India and Brazil many times in the last year. Official images confirm that the three-row Jeep Commander gets quite a few unique bits to differentiate itself from the two-row Compass SUV on which it is based on. The Commander will be produced at the Jeep plant in Goiana, Brazil, that also builds the Compass, Renegade and the Fiat Toro – all these SUVs share the same platform as the Commander. Right-hand drive versions will be built at the Ranjangaon plant in India, that also builds the Compass, and exported globally.

At first glance, the Commander does look like a longer Compass, but a closer look shows the difference in design details. The Commander actually shares quite a bit of its styling with the larger Grand Cherokee L. Some design details that link back to the Compass include the front grille with the top section folded backwards, and the familiar chrome detailing along the upper edges of the windows. The rectangular full-LED headlamp and slim tail-lamps are designs seen on Jeep’s new-generation Grand Cherokee, with the window-line also similar to newer Jeep models. Upfront, the bumper design too is unique to the Commander, with large faux vents featuring LED Daytime Running Lamps and fog lamps, with a chrome strip running across the fascia.

The added length is evident when viewed from the sides with the rear doors and quarter windows being larger than the Compass. Apart from the long wheelbase, the rear overhang also seems longer. The Commander’s tailgate is more upright and gets a premium look when viewed from the rear three quarters, which is especially similar to other Jeep models like the new flagship Wagoneer SUV. The slim LED tail-lights joined by a chrome strip round off the looks.

On the inside, the dashboard design is mostly identical to the Compass, but a closer look shows new metal inserts and a suede fabric trim on the dashboard and door panels. The front seats too look straight out of the Compass, although they are wrapped in brown leather upholstery with embroidered suede details. An interesting design touch is the words ‘Jeep 1941’ embossed on the front centre armrest. The rose gold accents on the center console also look particularly nice.

The most important highlight of the Commander is obviously its third row of seats. The second-row seats split 60:40 to allow access to the third row. Third-row passengers will also have amenities such as blower speed adjustments and USB charging ports.

In Brazil, Jeep has decided to continue with the existing 170hp, 380Nm (30Nm more than the Compass), 2.0-litre Multijet diesel engine for the Commander. This engine comes mated to a 9-speed automatic transmission and gets a 4×4 system as standard.

The Commander also gets a 185hp, 270Nm, 1.3-litre turbo-petrol engine with flex-fuel tech. This engine comes mated to a 6-speed automatic transmission and drives only the front wheels. The same engine does duty in the Compass sold overseas and a few other Stellantis models.

The Commander will be sold as the Jeep Meridian in India and will launch by mid-2022. Key rivals in India would include the Toyota Fortuner, Ford Endeavour and Skoda Kodiaq.

Upcoming three-row SUVs, MPVs in India: 2021 and beyond