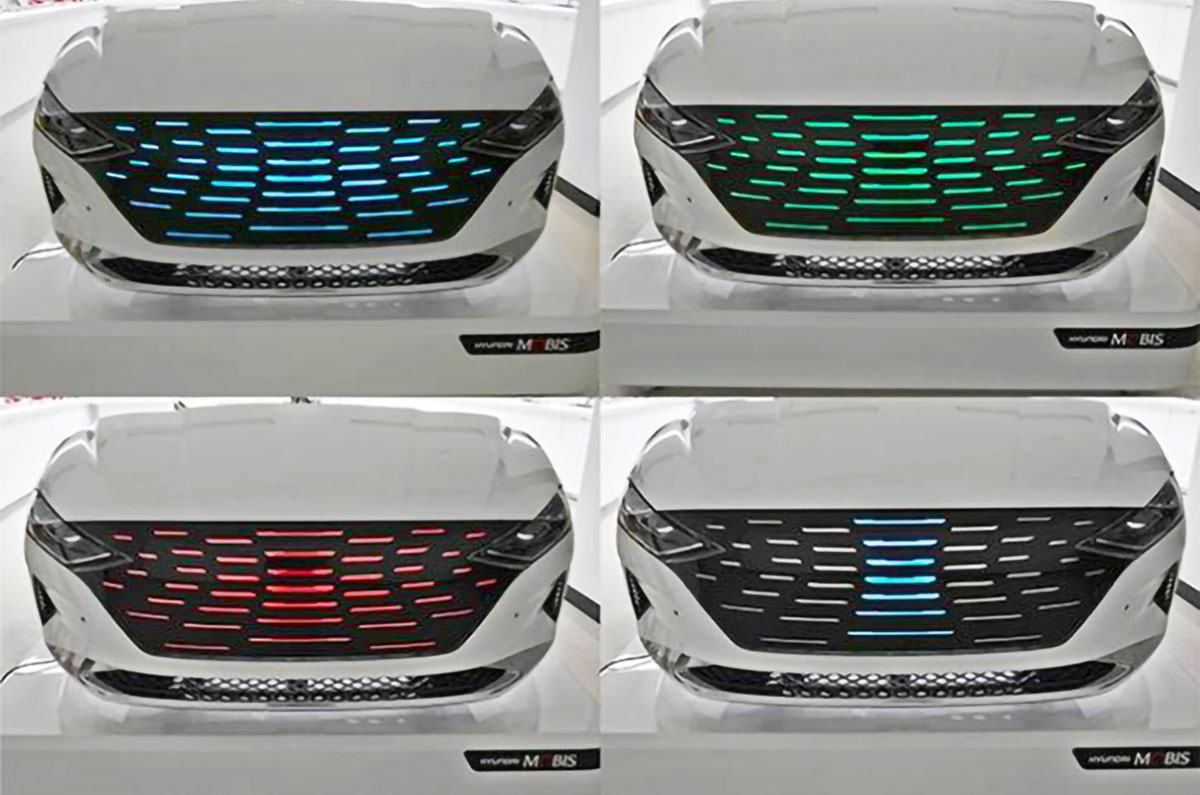 Hyundai Mobis, the auto parts specialist arm of the Hyundai Group, has developed a new ‘lighting and moving grille’ technology which it aims to put into production next year. The company says that the new technology is the result of its R&D efforts in response to megatrends of electric vehicles and autonomous vehicles.

The core of the new grille technology consists of the ‘lighting grille’ and the ‘moving grille’. The former implements an LED lighting function in the front grille of a car while the latter features a new ‘grille integral active air flap’ technology that automatically adjusts the airflow into the engine compartment.

Using the grille as a lighting device

Hyundai Mobis’ ‘lighting grille’ technology can use the entire front grille of the car as a lighting device. It is characterised by being able to illuminate in various colours or in patterns to preview autonomous driving modes, the EV charging mode, the welcome light function, and act as an emergency warning light display.

The ‘lighting grille’ can be used as a means of communicating with other vehicles or pedestrians and it can also create strong and unique design effects, depending on how the lighting patterns are applied.

The ‘moving grille’ technology, on the other hand, controls the outside air to cool the engine as the grille moves and provides the lighting function as well.

Unlike the existing method (built-in), this has been developed as a grille integral type (external). The built-in air flap, located inside the grille, detects changes in the temperature of the coolant and blocks the inflow of outside air by lowering the flap if cooling is not necessary. The company says this “is expected to not only improve fuel efficiency and reduce exhaust gas, but also realise a sense of luxury in the exterior design of the vehicle.”

The tech can improve fuel efficiency as it reduces air resistance (if outside air is blocked) and reduces the emission of pollutants through the exhaust gas by improving the cooling efficiency inside the engine compartment. The advantage of the grille integral (external) air flap is that it can implement differentiated design patterns through its lighting while also enhancing the eco-friendly effect.

“We are making constant efforts to develop new technologies that can meet customer needs in response to the changes in future car trends,” said Lee Woo-il, head of the Module Lab of Hyundai Mobis. “We will pre-empt the global market with innovative products that combine a high level of technology readiness with emotional quality.”

Hyundai Mobis also developed a virtual engine sound system which uses the automotive grille as a global first last year. If this technology is applied to vehicles, it can be used not only for the virtual engine sound, but also as the turn signal sound, the EV charging alarm sound, and speakers for playing music while camping.

Plans to put tech into production in 2022

The new technology is still some time away from production with Hyundai Mobis currently verifying its reliability for being used in production vehicles. The company has said that it aims to put the technology into production next year though there are no details about which models in the company’s global portfolio could receive the technology.

Coming to the Indian market, Hyundai recently launched its mid-size seven-seat SUV, the Alcazar. The carmaker’s next big launch for the Indian market is expected to be its micro-SUV codenamed AX1 which will go up against the likes of the Tata HBX.

Hyundai has also begun testing a facelift for the popular Creta SUV with the updated SUV likely to make its debut in global markets next year.