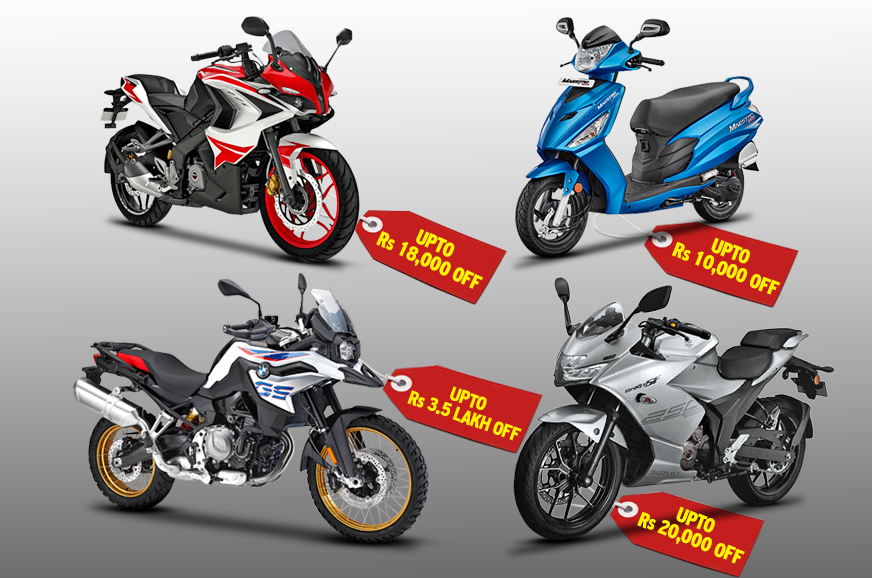 As BS6 norms will come into effect in a few weeks, this might be your last chance to save big on BS4 two-wheeler purchases.

With just a few weeks to go before the BS6 norms come into play, dealers are doing their best to get rid of the old BS4 stock. The situation this time around is far less frantic than before (when the BS4 norms became mandatory on April 1, 2017) with both manufacturers and dealers being much better-prepared this time around. Still, there will be plenty of stock waiting to be liquidated, especially for the slower-moving products. This is a list of discounts that we have come across and we’ll be updating the list as the clock ticks down to April 1, 2020. What you will find below are some small offers available with multiple vehicles, as well as a few really good deals that might just be available on the last units lying at a dealership. With a little luck and plenty of patience, you may be able to snag a really good deal on a BS4 two-wheeler in the coming weeks. Scroll down to get an idea of the sort of discounts on offer.

Discounts are subject to change depending on city and availability of stocks. Contact your local dealer for exact discounts.

Activa 5G
Discounts: Up to Rs 6,500 off
Price: Rs 55,934 onwards
The Activa is Honda’s highest-selling scooter and is also the most sought-after scooter in our market. Its BS6-compliant iteration, the Activa 6G, costs over Rs 8,000 more.

Dealers across the country are offering discounts of up to Rs 10,000 on Heroes scooters. These models include the Pleasure Plus, Duet, Maestro and Destini. The brand’s motorcycles, meanwhile, are being offered with discounts going up to Rs 7,500, varying from city to city.

Ninja 650
Discounts: Up to Rs 65,000 off
Price: Rs 5.89 lakh onwards
The Kawasaki Ninja 650 was recently updated internationally with a new design and TFT display, among other features. These updates, along with the Euro 5/BS6-compliant engine will see a hike in prices for the new bike.

Scrambler 900
Discounts: Up to Rs 1 lakh off
Price: Rs 8.55 lakh onwards
This iteration of the Street Scrambler was launched early last year. Peak power is 65hp and peak torque is 80Nm.

G 310 R and G 310 GS
Discounts: Up to Rs 70,000 off
Price: Rs 2.99 lakh onwards
The G 310 twins are rather expensive offerings for what they have on offer and these current discounts put them at a price point they should have been priced at. We could also see these models discontinued for a while after the BS6 norms kick in; so at the moment, this is likely the last opportunity you could have to get your hands on either bike.

F 850 GS
Discounts: Up to Rs 3.5 lakh off
Price: Rs 12.95 lakh onwards
The 853cc parallel-twin motor on the F 850 GS produces 85hp and 92Nm of torque and this motorcycle is one of the most capable ‘middleweight’ adventure motorcycles in the market.

Multistrada 950
Discounts: Up to Rs 3 lakh off
Price: Rs 12.84 lakh onwards
The younger sibling of the very versatile Multistrada 1200, the Multistrada 950 wasn’t as popular as in our market and Ducati dealerships have a few units that are being offered with discounts.

Forty Eight Special
Discounts: Up to Rs 75,000 lakh off
Price: Rs 10.98 lakh onwards
The standard and Special variants of the Forty Eight are both powered by the same 1,202cc, air-cooled, V-twin engine in the same state of tune. The Forty Eight Special comes with a different, shorter version of an ape-hanger-styled handlebar that raises the rider’s hands higher but also brings them slightly forward.

Certain dealers we spoke with were also offering a similar discount on the 1200 Custom.

Multiple dealers we spoke with have cleared out all their BS4 stock. A select few had a few units of the Pulsar Twin Disc (which was being offered with a Rs 15,000 discount) and the RS200 (which was offered with a Rs 18,000 price cut). The available models will vary from city to city and dealer to dealer, so enquire at the one closest to you to see what’s available.

Just like the Bajaj motorcycles, BS4-compliant Vespa and Aprilia scooters were unavailable at multiple dealers, but the ones that did have a few in stock were offering discounts going up to Rs 12,000.