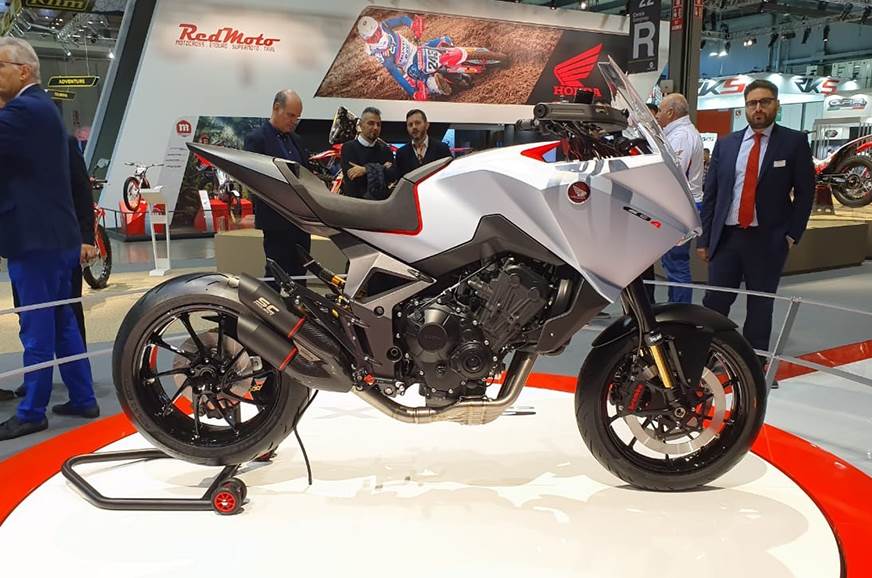 Honda dropped quite a few jaws at EICMA 2019 with the display of the stunning CB4X concept. Essentially a sharply designed ADV-sports-tourer, the CB4X was supposedly powered by the 650cc four-cylinder engine from the CBR650R, but not much else was revealed at the time.

Honda has now raised hopes that motorcycle becoming a production reality, as the company has patented the design with the European Union Intellectual Property Office. A look at the patent reveals that not much seems different from the concept shown at EICMA, but some details like the front brake callipers, tyre tread-pattern and a simpler looking rear shock appear more production appropriate.

The CB4X is a tall, ADV-style motorcycle, but one that runs on 17-inch wheels and is designed for life on the road. It’s a machine that follows a similar concept to the BMW S 1000 XR, but given its smaller engine capacity, it will be positioned more as a rival to the Yamaha Tracer 700. There is no clarity on when Honda will launch this motorcycle, or if it will at all, but you can expect it to be positioned at around a similar price to the CBR650R, give or take.

The CBR650R was last priced at Rs 7.70 lakh (ex-showroom, Delhi) in India and a bike like the CB4X (or whatever it will be called in its production form) might find a place in our market too.

Honda India earlier announced 5 exciting new products for the Indian market. Should this bike be one of them? Let us know your thoughts in the comments section below.

Honda will launch its first localised big bike in 2021