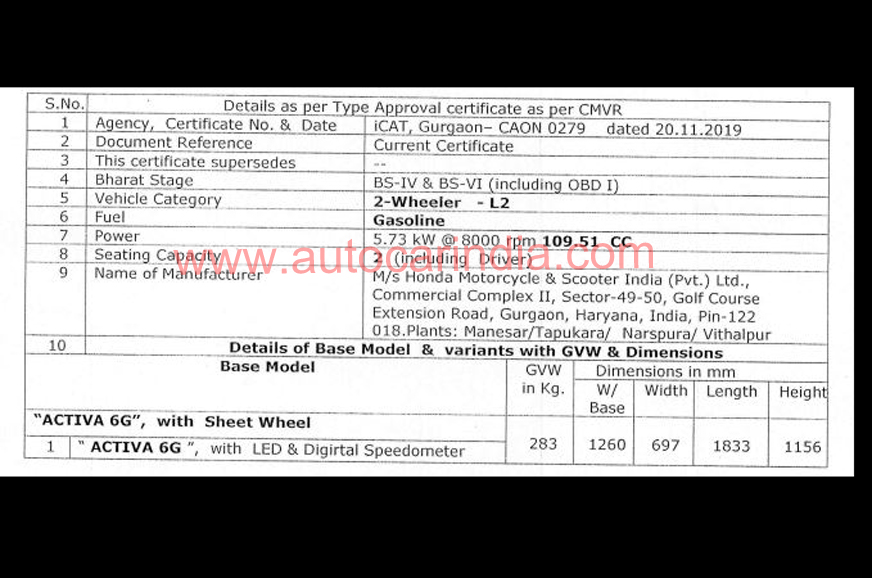 Honda only recently began teasing what we guessed was the BS6-compliant version of its most popular two-wheeler in India, the 110cc Activa. And now, a government document has revealed that it is in fact the BS6-compliant version the company is hinting at and it is set to be called the Honda Activa 6G. The leaked document also reveals the scooter’s power figure, specifications and more.

To begin with, like the company’s BS6 SP125 and Activa 125, this one has witnessed a change in the cubic capacity. The single-cylinder motor on the BS6 model will be 109.51cc as compared to the 109.19cc motor on the BS4-spec scooter. While there is no mention of fuel-injection on the government document, the Activa 6G will most definitely use it as the fuelling method instead of a carburettor. Sadly, the power figure on the Activa 6G has gone slightly down and it now produces 7.79hp at 8,000rpm instead of 7.96hp at 7,500rpm. We only expect to find out about the torque figure when the scooter makes its debut on January 15.

Interestingly, the document also reveals that the Activa 6G will also feature different dimensions when compared to the outgoing BS4 Activa 5G. The wheelbase on the 6G is 22mm longer, at 1,260mm. The length, width and height, meanwhile, stand at 1,833mm, 697mm and 1,156mm on the Activa 6G. In comparison, the length, width and height on the 5G are 1,761mm, 710mm and 1,158mm, respectively. These changes could mean that the scooter will feature design changes.

Another hint comes from a line in the document that states “Activa 6G with LED and digital speedometer”, which is self explanatory. Like the 5G, the 6G will feature an LED headlight, although, it could feature a slightly different design, like the rest of the scooter. While the document does suggest the Activa 6G will feature a digital speedometer, we believe, it will be a digi-analogue unit, like the one on the more premium BS6 Activa 125. If that’s the case, the small digital screen on the BS6 Activa 110 will display a host of information including fuel consumption information and range.

As for other features, the Activa 6G is expected to feature the silent start system that is also available on Honda’s other two BS6 two-wheelers. That said, it might miss out on auto start-stop that the Activa 125 BS6 features, as the Activa 6G is the more affordable model.

The Activa 6G will become the second BS6-compliant 110cc scooter after the TVS Jupiter, joining a list of 125cc and above scooters that have made the switch to the more stringent emission norms. The Activa is the highest selling scooter in our country and we’ll have to wait a couple weeks to see what else this updated iteration has in store for us. Considering how significant a role it plays in the company’s sales numbers, we expect to see a lower price hike than the Rs 9,000 increase the top-end variant of the Activa 125 underwent.