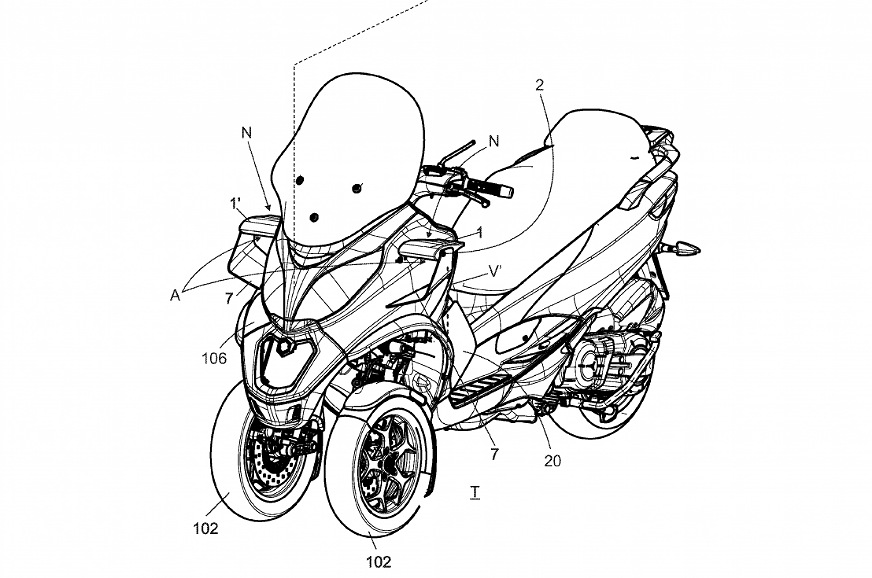 The Piaggio group has patented a new active aero winglets technology that is expected to make its way to future two/three-wheelers. The patent was filed at the World Intellectual Property Office. This is the second time that Piaggo has filed a patent for active aero winglets, the first being when it presented the Aprilia RS660 concept at EICMA 2018.

Piaggio’s new active aero winglets are designed to work independent of each other and help steer the vehicle, in addition to generating downforce or reducing drag. The patent drawings show the  C-shaped active aero winglets attached to the fairing of the Piaggio MP3, a popular scooter in Europe. However, Piaggio probably has much bigger plans for this technology and we could see it debut on a future superbike.

How does the Piaggio active wing technology work?

Early forms of active aero seen in cars typically helped in a straight line, by increasing downforce under braking and reducing drag while accelerating. Piaggio’s active wings are also designed to do the same but what sets them apart is their ability to also help steer the motorcycle. Let us take a closer look at how the system works.

The patent drawings reveal that the winglets on either side of the vehicle rotate up or down, independently of each other by means of an electric motor. In a scenario where the motorcycle is tipped into a corner, the wing on the inside is angled in such a way that it generates downforce while the one on the outside produces a slight lift. Similarly, at the exit of the corner, when the rider picks up the bike, the wing on the inside adjusts to generate lift while the one on the outside moves to generate a little downforce. Thus, it becomes easier to steer the motorcycle into a corner and out of it.

How are the Piaggio active winglets controlled?

Piaggio’s patent file suggests that the rider could use handlebar-mounted controls to adjust the active wings. However, a more prudent system – and the one that’ll make more sense – is an IMU-controlled mechanism. This relieves the rider of the responsibility and helps him/her concentrate on riding rather than fiddling with buttons at high speeds. The Aprilia RSV4 already uses IMU-based electronics so that’s the first piece of the puzzle in place.

Will it make it to production vehicles?

It is certain that active aerodynamics are the future, at least, when it comes to high performance superbikes. A number of manufacturers, including Honda, are working on developing active aero wings. But as we’ve said, given the complexity of the technology and the apparent cost of development and testing, these advanced wings could remain the preserve of top-tier superbikes in the near future.

MotoGP currently bans active aero, but if the technology is seen on a production road bike, then it could also be used in a racing version of that bike in something like the World Superbike Championship. With that in mind, active aerodynamics is likely to debut on a production motorcycle before it makes it to the world of racing.