Ducati invited us to Buriram to watch the 2019 Thai MotoGP. Here’s what experiencing a MotoGP race in the flesh is like.

A little over a month ago, factory Ducati MotoGP rider Andrea Dovizioso and Ducati sporting director, Paolo Ciabatti, were in India, as part of a little meet and greet with enthusiasts here. I assume the pair had a splendid time, because not long after, a small group of us journalists were invited as guests of the Ducati MotoGP team to watch the Thai MotoGP and given an almost unmatchable experience of race day. Here’s how my very short, yet intense weekend went down.

In the midst of it all

The Chang International Circuit is located in the small town of Buriram, 410km northeast of Bangkok, where we landed on a Saturday afternoon. We got in our cabs soon after but halted for the night, mid-way, in a town called Korat. The relaxed journey ended the next morning, and from when we arrived on track, things stepped into overdrive.

The passes Ducati arranged for us gave us access to the paddock area, the media lounge and the spectacular view of the track that came with it. If you’re unaware of what the paddock is, it’s where I found myself dumbfounded, surrounded by legends of the sport. It’s the space behind the pit lane where teams and their riders have set up for the weekend and it also gives a great insight into what happens behind the scenes. Stay long enough and you essentially have the opportunity to meet every rider on the grid. It was nice to see that despite all the transparency everyone just goes about their business – riders and spectators alike. Apart from the occasional little group that assembled every time Rossi or Márquez scootered by, everyone was understanding and respectful about the space they were in. After spending a good few minutes taking in everything around us, we were invited to lunch with Ducati management, where Paolo Ciabatti told us about his time in India and how impressed he was with the Buddh International Circuit.

If lunch with the team wasn’t enough of a surreal experience, we bumped into Luigi Dall’Igna – the general manager of Ducati Corse and a huge reason Ducati is such a strong title contender – on our way out. Karel Abraham even stopped by for a casual chat! The best was yet to come though; shortly after, we got a little guided tour of the Ducati pit. We were taken in through the narrow walkway – with body panels, tyres, wheels and entire suspension assemblies strung up around us – and walked out right into the action. The bunch of us barely said anything throughout this little excursion. Partly because we were engrossed taking in everything; even more so because Danilo Petrucci was there with one of the team’s engineers, looking through the insane amounts of data the bike collects – all laid out on a couple of computer screens and printouts of graphs and numbers. 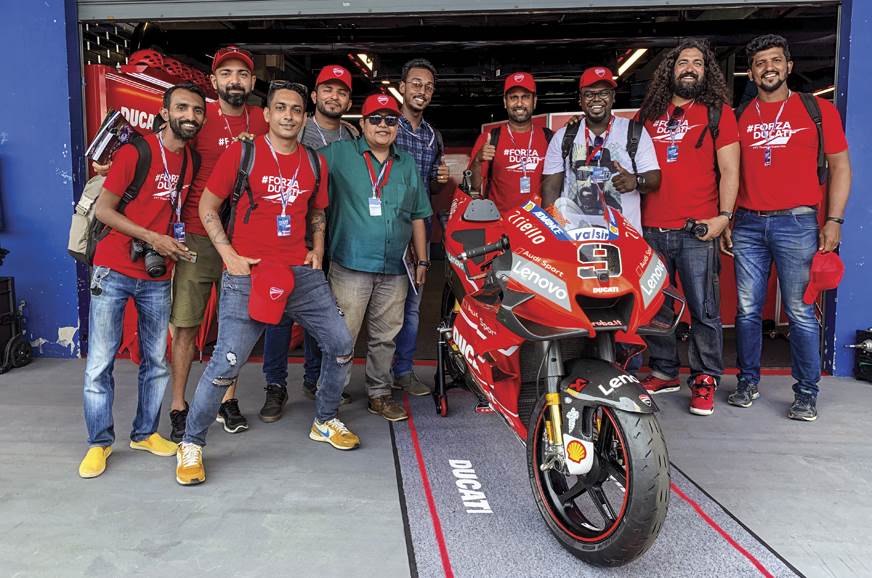 We had the rare opportunity to walk through the pits and experience what happens behind the scenes at a MotoGP race. You can’t see it in the picture, but Petrucci was right behind us, prepping to head out!

It all happened so fast, and before we knew it, it was time to move out of the pits. The teams were starting to prepare for the race, so we were taken to the media centre – a room that’s much like the depiction of an office on Wall Street in most movies. Television screens all around, journalists taking notes and posting updates, along with a number of booklets and other race-related information; I helped myself to a bunch of them to keep as souvenirs. The attached viewing section is probably the best place to watch the race from – it gives you a panoramic view of most of the track (barring parts of Sector 2) and we overlooked the finish line where a few hours later, we’d witness history. Marc Márquez crossed the line and became an eight-time world champion, less than a hundred metres away from where we were seated. It was a disappointing weekend for the team we were there supporting; after a strong performance in free practice, the Italians were deprived of a spot on the podium, with Dovizioso crossing the line in 4th place. 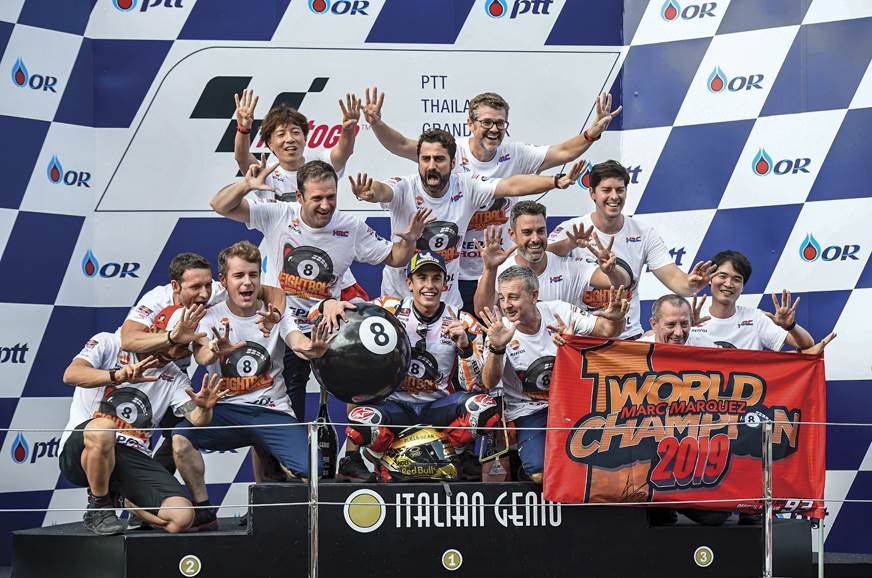 After a nail-biting battle down to the last corner, Márquez crossed the line an 8-time World Champion.

If you live in India, the Thai MotoGP is one of the most economical ways of experiencing a MotoGP race weekend, first hand. There’s a lot of factors that affect how much it’ll cost you; but if you’re on a budget, you can make the entire trip for well under Rs 40,000. That said, there will be a lot of people with the same idea as you. This year, tickets to the grandstand sold out just a few hours after they went on sale – so timing is everything!

If you’ve ever been to a race, especially one that happens at a proper racing circuit, you’ll know that most of it passes by in a blur, quite literally. You’ll catch more of the action watching it on screen, but if you’re a fan of the sport, the celebration that a MotoGP weekend is, the sights, the sounds and the opportunity to be so close to the ones that make it what it is, is something you must experience at least once. I’m glad I got to in such a memorable way.