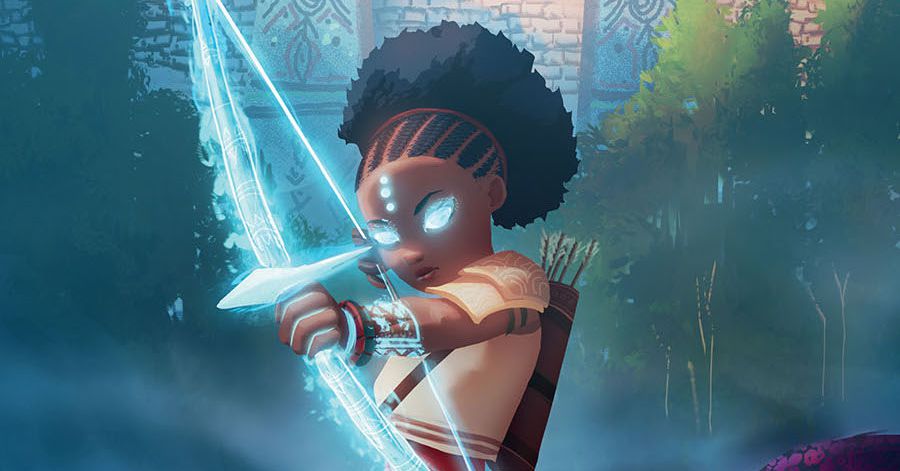 
Billed as a look at the future for one of the industry’s leading independent publishers, the 35 Years of Dark Horse: Past and Present panel at San Diego Comic-Con 2021 proved to be just as much a celebration of the medium and its evolution in the three and a half decades past.

Hosted by Dark Horse publicity maven Kate Jay, the panel was made up of writers Roye Okupe, Cullen Bunn, Christopher Golden, and Faith Erin Hicks, as well as one of the most important figures in mainstream U.S. comics, editor Karen Berger, whose Berger Books imprint launched at the publisher in 2019.

Berger held court about her history in the industry, explaining that she was initially hired at DC Comics thanks to an interview set up in the early 1980s by a friend — writer J.M. DeMatteis — even though she wouldn’t have classified herself as a comic book fan. After working on a number of titles, including DC’s horror anthologies, she explained, “I fell in love with the medium, I love the collaborative aspect of creating comics,” although she said that her lack of early fandom was what allowed her to become the editor that she did.

“I gravitated toward comics that weren’t male power fantasies,” she said, adding, “I was able to look at the medium and ask, ‘why aren’t we doing stories about real life?’” The result of this line of thought proved to be DC’s much-missed Vertigo line, which Berger founded in 1993 and headed up until 2013.

As it happens, one of the initial Vertigo titles is returning to print via Berger Books, and Berger was enthusiastic when talking about the new edition of Peter Milligan and Duncan Fegredo’s Enigma, which will get a hardcover edition this fall. “I am now thrilled to represent [Enigma] in the best package it’s ever had in its life,” she teased. “At DC, we never reproduced it in the best fashion.”

Berger will also re-team with Devin Grayson, who wrote the Vertigo miniseries User, for a new series, Rewild. Berger described the title as a “cli-fi” story — a horror story about climate change. Illustrated by Yana Adamovic, the book was described as “kind of like Fables meets The Fisher King,” and features “very mythological beastly characters who have been mutated and disfigured by what’s happened to the climate.”

The future of Berger Books, the editor revealed, also includes a change of format. Moving forward, each title will be released as an original graphic novel instead of being serialized in traditional comic form, something that she said was a combination of pandemic-inspired re-evaluation of what kinds of projects she wanted to work on, and simple economic reality: Berger Books titles have consistently sold better in collected format than in single issues. “For me, for comics, it was always, how do you get to the book form?” Berger asked.

Although Dark Horse publishes a lot of creator-owned titles, it’s also the home to a number of licensed titles, and Bunn, Golden, and Hicks all talked about their experience working on properties owned by outside companies. “The creators of the video game were very open,” Bunn said about working on a Cyberpunk 2099 tie-in series, “I wasn’t given marching orders for that comic.” (He was given figurines of characters he created for the comic, however.)

Hicks was similarly pleased by her time working on The Last of Us: American Dreams — “The Last of Us was something where I did get to create a lot,” she said, going on to reveal that she’d co-created backstory for Ellie with the game’s writers — but admitted that it was “terrifying” to work on the Avatar: The Last Airbender graphic novels, due to her love of the source material. “I think it’s the platonic idea of an animated television program for children,” she admitted.

Roye Okupe, whose YouNeek crowdfunded graphic novels including EXO: The Legend of Wale Williams and Marika: Warrior Queen will be re-released with new material by Dark Horse, explained that he got into comics by accident. “I was too broke to do my own animated films, but it ended up being the best thing that could have happened,” he said. Wanting to tell African-inspired stories using African talent, he used Kickstarter to fund 10 graphic novels in five years, and talked about how grateful he was for the opportunity afforded to him.

“At this point in time, you have no excuse not to tell your story. I’m not saying it’s easy, but it’s easier than it’s ever been,” he said. “What comics does better than any other medium is allow authentic people to tell authentic stories.”

As the creators discussed the future of comics, all agreed that an increased focus on diversity — in terms of characters and creators — was what excited them all the most. As Berger put it, “it’s not just straight white boy comics anymore.”

“I’m most excited that we are all, in the industry, attuned to the idea that comics are for everybody, no matter where they are in the world,” Okupe agreed.