BMW Motorrad has revealed the production-spec R18 cruiser, months after it showcased the smashing R18 concept at the 2019 EICMA. The concept was undoubtedly one of the most good-looking motorcycles at the show, and what’s nice is that BMW hasn’t changed much in this transition from concept to production form.

This being a modern BMW cruiser, however, means that it’s loaded with all the bells and whistles you’d expect. We also like how the bike maker has managed to incorporate modern-day features in a gorgeous style that harks back to BMW cruisers of the ’30s. Let’s just get on with the details, shall we?

The BMW R18 looks stunning and, in many ways, resembles the 1936 BMW R5 cruiser. Parked side by side, the design inspiration is clearly visible in its round LED headlamp, tear-drop-shaped fuel tank and the swooping rear fender. Period-correct details like the exposed drive shaft, front fork covers and the rear monoshock hidden inside the frame architecture highlight the meticulous attention to detail. In fact, the new Boxer engine, in terms of exterior architecture, looks strikingly similar to the R5’s motor. The design of the engine cam covers, for instance, draws inspiration from the old model, and it’s the same case with the fish-tail-style exhaust. That said, the need to conform to strict emission norms has resulted in an exhaust that looks swollen; and that’s probably the only design element that is a little hard to digest. Get over that bit, however, and there’s no denying that the R18 ticks almost all the cruiser motorcycle design boxes, except for the position of the footpegs. Given the layout of the engine, it’s impossible to fit forward-set footpegs, and this could be a deterrent for those looking for the typical cruiser style riding position. That said, the R18’s swept-back handlebar and low seat height, at 690mm, should result in a comfortable riding position.

On the whole, the R18 looks gorgeous, and that’s not all – BMW is also offering a wide range of customisation options to tweak the design to suit individual tastes.

BMW has a wide catalogue of bolt-on aluminium parts to choose from, supplied by its official partners Roland Sands Designs. Then there are seats by US-based Mustang Seats. And for those who detest the bulbous exhaust cans, there is an option to kit the bike with sleeker and better-looking pipes by Vance & Hanes, finished in either chrome or black powder coat.

The process of replacing standard parts is quick, says BMW. The rear frame, seats, side panels and other painted parts can be easily replaced to change the bike’s appearance. You could fix a Bobber-style floating seat, replete with a side-mounted number plate holder, and also fit a variety of handlebars to convert the R18 from a cruiser to a Bobber, Bagger or even an Ape-hanger. BMW says that replacing these parts was made easy by using plug-and-play type clutch and brake lines, as well as the handlebar wiring. The engine valve covers and housing covers can be swapped out too, and won’t require an oil change as they are located outside the oil chamber.

BMW is also offering a bigger, 21-inch wheel at the front and a set of alloy wheels as options, in case the standard-wire spoke wheels don’t float your boat.

While the design is delectable and the list of options is massive, at the heart of the R18 is the new Boxer engine that’s the largest of its kind to be ever incorporated in a BMW production motorcycle.

The 1,802cc, air- and oil-cooled engine produces 91hp at 4,750rpm, which may not seem as much considering its size, but crucially, it produces 158Nm of torque at 3,000rpm. A fat chunk of that torque, 150Nm to be precise, is available between 2,000-4,000rpm and this should translate to effortless cruising on the highway. The strong bottom end should also make it easier to ride the bike in cities, as you don’t have to move up and down the 6-speed gearbox frequently.

Unlike chain or belt-type final drives, as seen in most cruisers, the BMW R18 employs an exposed shaft drive, similar to the old BMW cruisers it takes inspiration from. The drive shaft and universal joint are nickel-coated, and since they are exposed, it’ll be fascinating to watch them rotate as the bike trundles down the road. That said, the downside of such an open-shaft drive setup is that it’ll leave the system exposed to dirt, grime and other debris that you’d find on highways, especially in India. 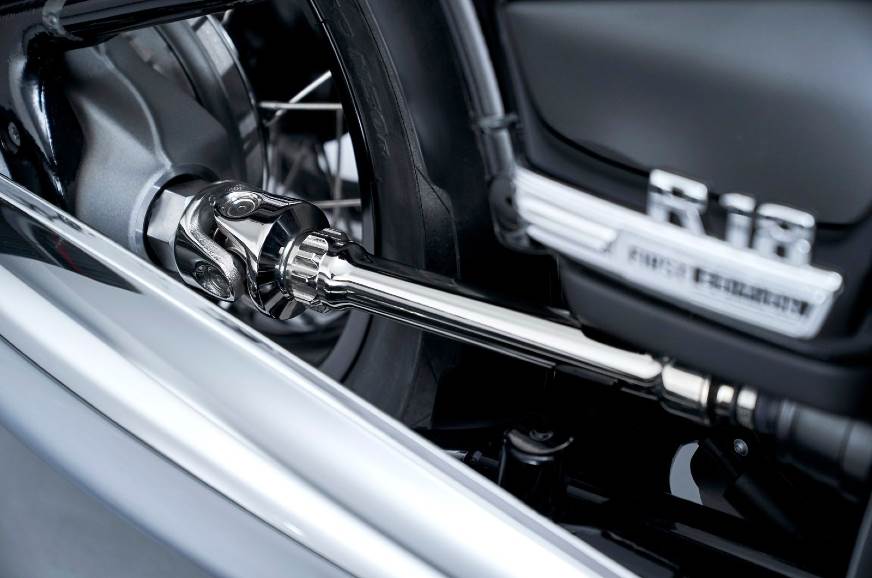 Now, for those interested in knowing the  performance numbers, BMW claims a 0-100kph time of 4.8sec and a top speed limited to 180kph. That’s pretty quick for a big cruiser, and let’s not forget that the best bit of this engine’s performance is the low-end torque.

The motor has a four-valve head but in keeping with the retro theme, BMW has incorporated a OHV or overhead valve with two camshafts per cylinder. The OHV was present in BMW Boxer engines in the 1930s and 1950s. Other modern-day bits in the engine include NiCaSil-coated cylinders and an additional bearing at the centre of the crankshaft to reduce vibrations, especially at high speeds.

What’s also worth mentioning is that the engine, gearbox and intake system collectively weigh 110.8kg. Looking at this, it may seem that BMW did everything possible to keep the weight of the motorcycle in check, but the R18’s 345kg kerb weight suggests otherwise. That figure, however, is on par, and in some cases, more than its direct competition from the stables of Harley-Davidson and Indian Motorcycles.

Nevertheless, the performance on offer seems enough for a big cruiser and BMW has also thrown in a neat electronics suite to keep everything in check. 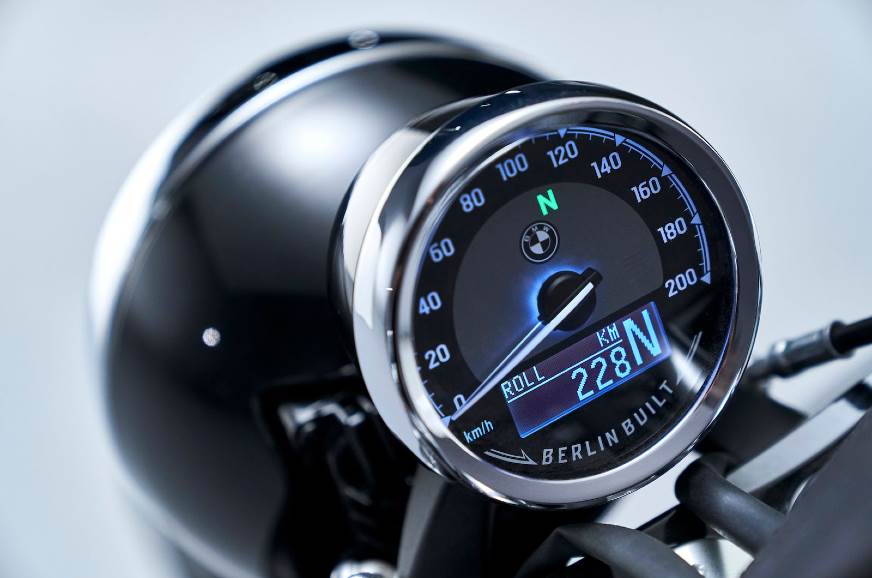 The riding modes alter the power delivery and ASC intervention. So, in Rain mode, the throttle response is gentle with the safety systems at maximum alert, while ‘Roll’ is sort of a mid-level setting. Rock mode sharpens throttle response while backing off the ASC to allow more slip and, hence, is more fun.

BMW is also offering optional extras such as hill-start assist, heated grips, cornering lights and a reverse gear driven by an electric motor.

Although BMW is renowned for employing sophisticated electronic suspension components in its motorcycles, case in point being the R1250GS, the R18’s suspension units are rather conventional. BMW says that it deliberately did so, in keeping with the retro theme, and so what you get is a 49mm telescopic fork (120mm travel) at the front and a cantilever strut at the rear (90mm travel), mounted directly to the frame and swingarm. The rear suspension also features travel-dependant damping and spring preload adjustment which allows the rider to set up the bike depending on their weight.

As far as the brakes are concerned, there are two discs at front (with fixed, four piston calipers) and one at the rear, each measuring 300mm. The braking system uses BMW’s Integral ABS technology, which is sort of like the Combi-braking technology we’ve seen on sub 125cc motorcycles in India. The only difference is that in the case of the BMW, squeezing the handlebar brake lever activates the front and rear brake. The Integral ABS system distributes the brake force between the front and rear brakes, according to the brake pressure and road conditions. 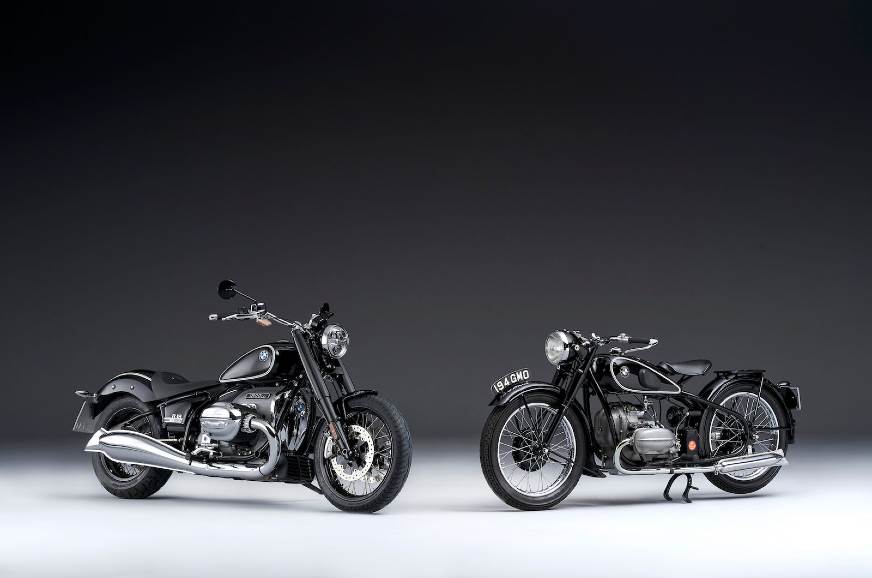 BMW will be selling the R18 in two trims – First Edition and Standard, depending on the market. The First Edition gets extra chrome elements, Blackstorm metallic paint shade with contrasting white pinstripes, and a seat badge with a ‘First Edition’ clasp on the chrome cover. Besides these embellishments on the bike, First Edition owners also get a welcome box that includes a historic tank emblem with copper letterings, copper screws, and a pair of gloves as well as screwdriver to fix the emblem on the tank. In addition, there’s a book about the 100-year history of BMW Motorrad. All this exclusivity comes at a price that’s over Rs 15 lakh, whereas the Standard R18 is pegged to be around a lakh and a half cheaper, if we simply convert the international prices. However, once you include our local import duties, registration, taxes and insurance fees, expect the price to go up significantly, if BMW introduces it in India.

That being said, the R18 comes across as a genuine stab at the cruiser market, one that’s been dominated by Harley-Davidson and Indian Motorcycles. Only time will tell if the cruiser motorcycle space will warm up to the idea of a BMW cruiser.