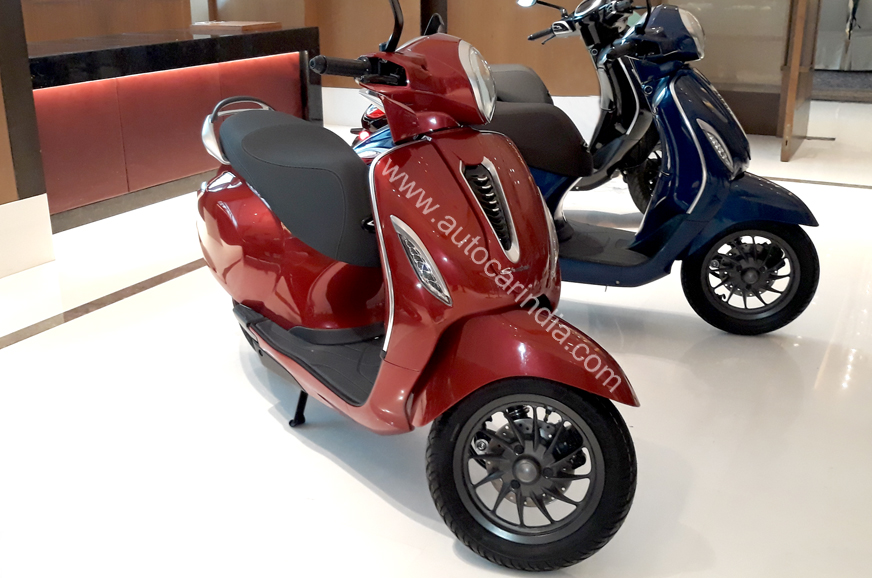 Beyond offering realistic range and performance, Bajaj’s retro-styled Chetak is expected to do more. We list out the key details.

Bajaj has just launched the Chetak in two models – the Urbane (Rs 1 lakh) and the Premium (Rs 1.15 lakh), both prices ex-showroom. The e-scooter will initially be retailed via select KTM dealerships in Pune and Bengaluru, and while you wait for it to make its way to a city closer to you, here’s a list of the five most important things to know about the 2020 Bajaj Chetak.

Like we just mentioned, the Chetak is available in two models – Urbane and Premium. The former is the base model and it’s available in two colour variants and gets a drum brake at both ends. Premium, meanwhile, offers a metallic finish on its four colour schemes, gets a stitched pattern on the seat and a disc brake at the front. For reference, the Ather 450, which will be the Chetak’s closest rival, is priced at Rs 1.13 lakh (on-road, Bengaluru). To read all of our thoughts on the pricing, head here.

The scooter will be sold via existing KTM dealerships, and at the moment, the initial list consists of five in Pune and 13 in Bengaluru. Bajaj has begun accepting bookings for the Chetak on its website for a price of Rs 2,000, with deliveries set to begin in February.

Quality is a priority

The Chetak is positioned as a premium product and extra attention has been paid to smaller details like the ‘feather touch’ switchgear, full-LED lighting, digital console and high quality of materials used in areas like the mirror stalks, side stand and flush-fitting pillion foot pegs. The Chetak is also one of the few scooters in India to be offered with a metal body. The lack of visible joints on the body panels is also quite impressive – the entire rear looks like a single unit, giving the scooter a high-end appearance.

The Chetak uses a 3.8kW/4.08kW (continuous/peak) electric motor that can propel the scooter to a top speed of 60kph. The e-scooter also has two riding modes – Eco and Sport – and has a reverse assist feature as well.

The battery pack features an IP67-rated, lithium-ion non-swappable battery with a maximum capacity of 3kWh. A full charge will supposedly take 5 hours, while a one-hour charge recharging the battery by 25 percent. Bajaj claims that the Chetak is capable of a real-world range of 85km and 95km in Sport and Eco modes, respectively.

The scooter has an in-built charger and the vehicle can be charged by plugging into a regular 5-ampere home power outlet. While there is no DC fast charging feature, Bajaj is offering a home-charging station with the purchase of the scooter.

It doesn’t take more than a glance to realise that Bajaj has taken the retro-styling route with their new electric scooter. While the design fits the retro Chetak nameplate, Bajaj missed an opportunity to debut a completely new styling direction to match its electric underpinnings. That’s not saying that the Chetak doesn’t look appealing; far from it actually – it is quite pretty. The curvy bodywork, multi-spoke wheels and contoured seat work in harmony to create what looks like a timeless design. That said, just as the original Chetak was based off the Vespa Sprint, the new-age Chetak echoes modern-era Vespas, even though this one has nothing to do with the Italian brand.

The Chetak gets a round, simple-looking LCD display that merges into its retro design quite well. But don’t be deceived by its appearance because it does have a fair amount to offer; the unit is smartphone compatible and you can access it via an app. The app gives you access to navigation, tracking features, vehicle and battery statistics, and safety features like phone notifications for when there’s an alteration in the charging or if the vehicle is moved when locked. However, it has to be said that the data connection required for the smartphone app-related functions is free only for the first year.