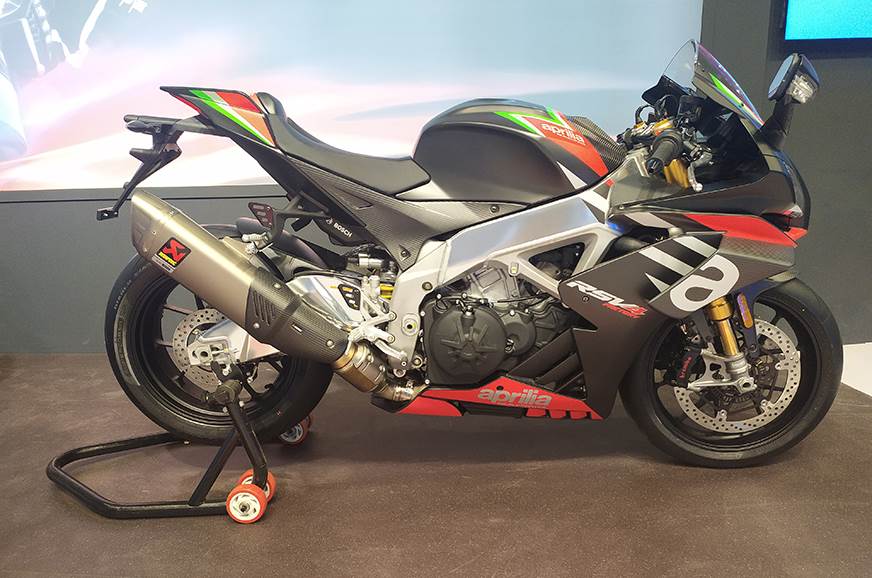 Late last year, Aprilia updated its flagship superbike, the RSV4, after nearly a decade. Dubbed the RSV4 1100 Factory, the supersport received a slightly larger, more powerful engine, changes to the suspension and frame, and more. The RSV4 1100 Factory is on display at Auto Expo 2020, and Aprilia has also told us that while it didn’t make a public announcement, the bike has been on sale to customers in India for a price of Rs 22.4 lakh (ex-showroom, India). Aprilia had told us last year that its big bikes weren’t a focus and so, at the moment, are only available on an order basis – this one takes 45 days to reach you once it’s been booked.

In addition to the engine, Aprilia has also revised the bike’s frame and suspension setup as well as weight distribution and ergonomics. Its top-spec hardware comprises Öhlins NIX forks and a monoshock and steering damper, also from Öhlins. Braking, meanwhile, is handled by Brembo Stylema calipers.

Aprilia didn’t just stop there. The 1100 RF also gets carbon-fibre MotoGP-like aero winglets. A titanium Akrapovič exhaust is also standard and the bike weighs just 199kg with a full tank of fuel.

Also on offer is the manufacturer’s APRC System (Aprilia Performance Ride Control), which includes traction control, wheelie control, launch control, cruise control and a speed limiter, all of which can be configured and deactivated independently.

The RSV4 1100 RF on sale here currently does not comply with the upcoming BS6 norms and so will be on sale only until April 1, 2020.

Mi Bluetooth Speaker Basic 2 with High-Definition Sound and up to...

iPhone Shipments in India Grew Over 55 Percent in January-February: CMR

KTM 790 Adventure to be launched in the last quarter of...