Lamborghini has extended its collaboration with Guglielmo Marconi Airport in Bologna for the sixth time to bring in a Lamborghini Huracan which escorts the aircraft to its bay. 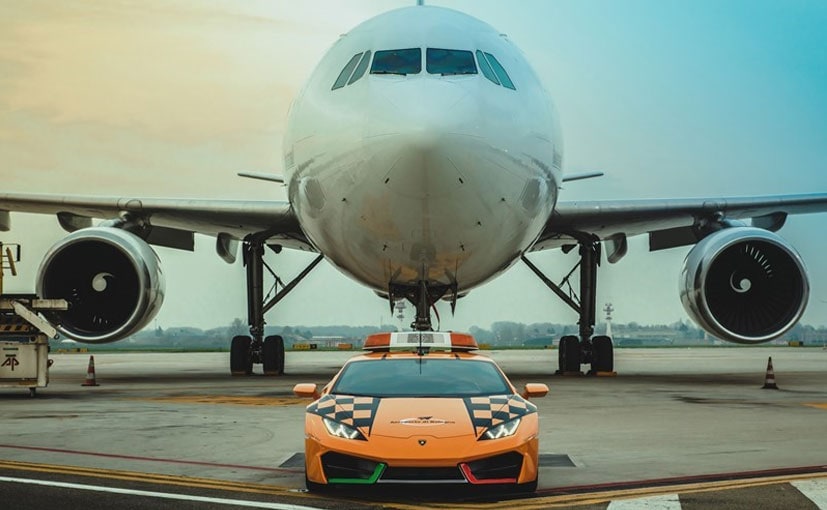 Lamborghini has extended its collaboration with Guglielmo Marconi Airport in Bologna.

When you land in Bologna, Italy, you kind of know what you’ll be treated to. Supercars are at the top of that list because Italy is synonymous with that’s because it’s home to carmakers like Ferrari and Lamborghini. While you expect to see one on the roads when you’re in the country, there’s no chance of getting a glimpse of a supercar on the runway. Now, however, all that will change as Automobili Lamborghini extends its collaboration with Guglielmo Marconi Airport in Bologna for the sixth time to bring in a Lamborghini Huracan which escorts the aircraft to its bay. The new follow-me Lamborghini Huracan RWD will be leading aircrafts towards the parking stand or taxiing out to the runway, a treat for both the driver of the car and of course the pilots as well.

The Huracan RWD Follow-Me, with a 5.2-litre naturally-aspirated V10 engine and 580 horsepower, sports a very special livery designed by Lamborghini Centro Stile. The orange body features graphics depicting the typical machines maneuvering in the airport areas, and the exterior is enhanced by the Italian flag on both doors, roof, front and rear intakes.

The vehicle is equipped with an orange light-bar on the roof; a radio, always connected with the control tower of the airport; and the distinctive stickers: “Follow me”. While the Huracan cannot unleash all this power on the runway, we are very sure it will be able to keep pace with the aircrafts flying in and out of the airport. So, if you are landing in Bologna, you will be escorted in style to your parking bay by a supercar.