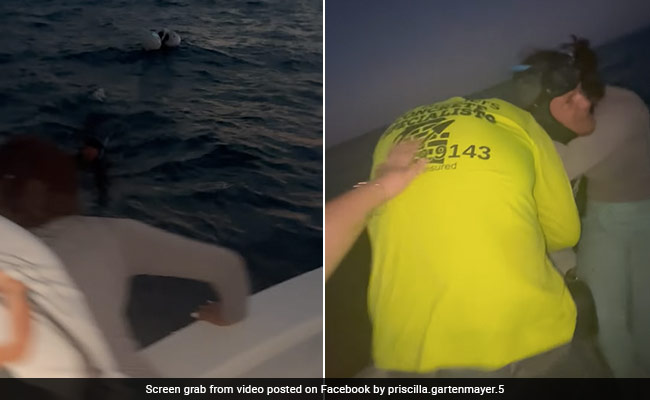 The moment Dylan is spotted drifting at sea, his family explodes with joy.

A video of a rescue operation in the ocean is going viral on the internet and shows an emotional moment when the family of a freediver spotted him alive in the water.

According to an NBC News report, Dylan Gartenmayer, 22, went missing at sea for several hours after becoming entangled in the strong Gulf Stream current, giving his family, known for spearfishing and free diving, the scare of a lifetime.

Dylan was alone in the water, drifting farther and farther from land as a rescue operation was in progress.

“I had a bunch of bait floating up around me and everything,” Gartenmayer said. “I knew that there were big fish eating those baits, and there were sharks that were going to be shortly behind them. I was ready to fight the night out, but I’m glad I didn’t have to.”

Dylan’s mother, Tabitha Gartenmayer, and other family members hopped on a boat and entered the sea to find their son. The emotional reaction of the family has gone viral after they rescued him from the deep water. On Facebook, Priscilla Gartenmayer, his cousin, described what happened.

She wrote: “After calling the family together, we hopped on the contender and had the scariest boat ride of our lives out to his last-known coordinates.”

“God was definitely on our side because as soon as we stopped running and started looking, we spotted him right away at almost the exact coordinates we were given.”

She added: “That second video was the moment we all laid eyes on him, I can’t stop watching it.”

The video of Mr. Dylan, who has been diving and spearfishing since childhood, is now going viral on almost all social media platforms.

Watch: Woman Scares Metro Passengers By Dressing Up As ‘Manjulika’ In Noida