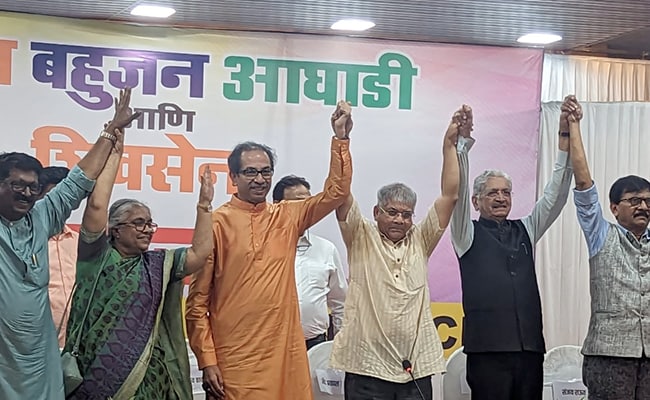 Uddhav Thackeray was in talks for over two months with Prakash Ambedkar, the grandson of Bhim Rao Ambedkar, who drafted India’s Constitution.

Announcing the alliance, Mr Thackeray said, “Today is 23rd January, the birth anniversary of Balasaheb Thackeray. I am satisfied and happy that several people of Maharashtra wanted us to come together. Prakash Ambedkar and I am here today to form an alliance.”

“My grandfather and Prakash Ambedkar’s grandfather were colleagues and they fought against the social issues at that time. Thackeray and Ambedkar have a history. Now their future generations are here to fight on the current issues of the country,” he added.

“As of now, it’s only the two of us. Congress hasn’t accepted the alliance yet. I hope Sharad Pawar will also join the alliance,” Mr Ambedkar added.

Earlier, a leader of Uddhav Thackeray’s Shiv Sena said, “Shiv Shakti and Bhim Shakti (the power of Shiva and Bhim) will come together ahead of the BMC (Brihanmumbai Municipal Corporation) elections.”

The alliance will take on the ruling Eknath Shinde-led Sena and BJP combine. Recently, the Shinde Sena announced a tie-up with a faction of the Republican Party of India (RPI). Another faction of the RPI led by Union minister Ramdas Athawale is an ally of the BJP.

The Uddhav Thackeray-led Maha Vikas Aghadi (MVA) lost power in June after a coup led by his former aide, Eknath Shinde, who went on to form a new government with the BJP.

The two allies have not revealed yet whether they will be part of the Uddhav Thackeray-Prakash Ambedkar alliance for the BMC polls. Sharad Pawar said he did not want to get into the “alliance issue”.

Mr Ambedkar’s friction with the Congress dates back to the 2019 general election, when seat sharing talks between the two failed.

“I don’t have faith in the Congress. They are focusing on the 2029 (Lok Sabha) elections. Earlier, I had demanded 12 seats where the Congress had been losing polls continuously, but they didn’t give those,” Mr Ambedkar said.

“There are differences between the alliance partners of the MVA. They will be more visible after 10 days,” he added.