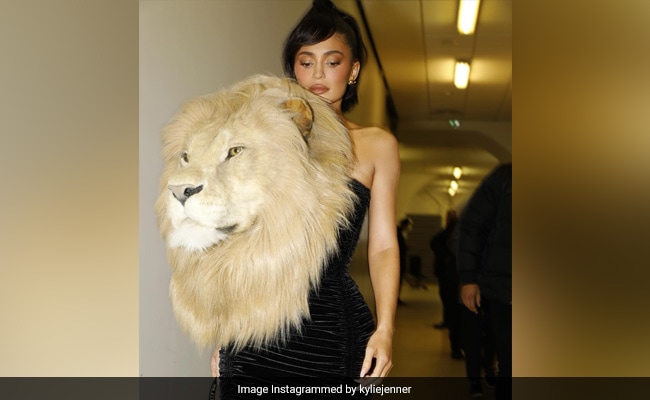 At the star-studded Schiaparelli show during Paris Fashion Week, Kylie Jenner made a bizarre entrance with a large lion’s head attached to her black gown. The celebrity drew the attention of many at the event on Monday by posing for pictures while wearing the huge accessory, as per a report in the People.

Ms Jenner wore a strapless, fitted black velvet gown featuring a replica life-sized lion’s head across her torso. She accessorised it with a snakeskin bag and a pair of bold, gold shoes with toe marks.

She took to Instagram to share the pictures from the event and praised Daniel Rose Berry, the creative director and designer of Schiaparelli for the exceptional fashion experience. She captioned the post as, “BEAUTY AND THE BEAST. thank you @danielroseberry and @schiaparelli for such a special morning. wow i loved wearing this faux art creation constructed by hand using manmade materials. beautiful beautiful.”

However, some of her fans were unimpressed and stated that a lion’s head is “not a fashion statement”. Many blamed the American socialite for promoting animal cruelty.

“How can anyone applaud this,” said a user.

A second person stated, “This is highly inappropriate, prop or not this should never have been designed.”

“Wow. This is disturbing on many levels,” added another person.

“Guess more Americans will be flocking to Africa now to get the latest wildlife accessories. Promoting hunting. As a South African, This is wrong on so many levels, The king of our jungle is not a fashion statement,” said another Instagram user.

Some people also called the look as “the worst mistake” of all time.

Another person said, “So disappointing to see this. After all the consultations, fittings and meetings she would’ve had before this event… not one person in your circle thought that this would be a bad idea???”

Anushka Sharma’s OOTD – Sunny Side Up