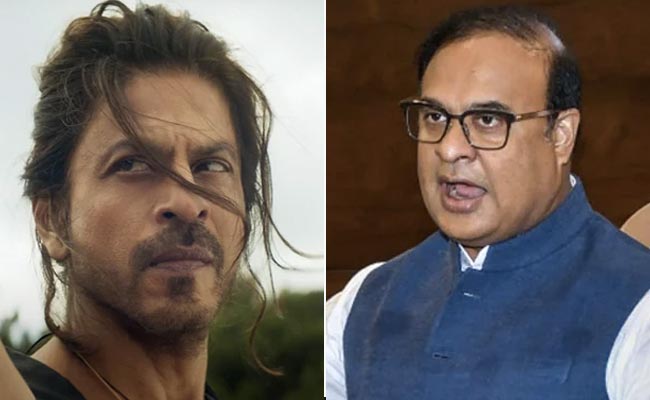 Himanta Sarma said he first received a message from SRK on Saturday evening.

A day after his phone call with Shah Rukh Khan, Assam Chief Minister Himanta Biswa Sarma reiterated that he “didn’t know who he was” when the mega star sent him a message on Saturday. “I haven’t watched many movies after 2001,” he claimed.

In the call, initiated by Shah Rukh Khan, the Assam Chief Minister reportedly assured the actor over protests against his movie “Pathaan”, to be released Wednesday.

Mr Sarma said he first received a message from SRK on Saturday evening.

“At 7.15 pm I got a text message from SRK. He introduced himself – I’m Shah Rukh Khan, I want to speak to you’. I didn’t have time then. I texted him back and called back at 2 am. He introduced himself to me, I didn’t know who he was. I know Amitabh Bachchan, Dharmendra, have not seen many movies after 2001,” said the Chief Minister today.

“So later at 2 am, we spoke, and I told him that there will be no disturbance in Assam.”

Mr Sarma had earlier tweeted about his chat with the star over an incident in Guwahati during the screening of his film. Some rightwing activists tore up the movie’s posters at a Guwahati theatre that will screen the film.

The phone call took place after Mr Sarma curtly told reporters the day before that he did not know anything about SRK or the movie Pathaan.

“Who is Shah Rukh Khan? I don’t know anything about him or the film ‘Pathaan’,” Mr Sarma had said in Guwahati on Friday. He was responding to a question on the protests and theatre’s owner Rajeev Bora receiving a call from SRK.

When told that SRK is a Bollywood superstar, Mr Sarma scoffed that people in the state should be concerned about Assamese films, not Bollywood. Mr Sarma also said he hadn’t received any call from SRK and that he would look into the matter if the actor urged him.

The actor called, the very next day.

‘Pathaan’ has provoked protests over the song “Besharam Rang” starring SRK and his co-star Deepika Padukone. Deepika Padukone wears a swimsuit that appears to be saffron, the colour revered by Hindus. Several leaders, including from the right-wing Vishwa Hindu Parishad, have demanded a ban on the movie.