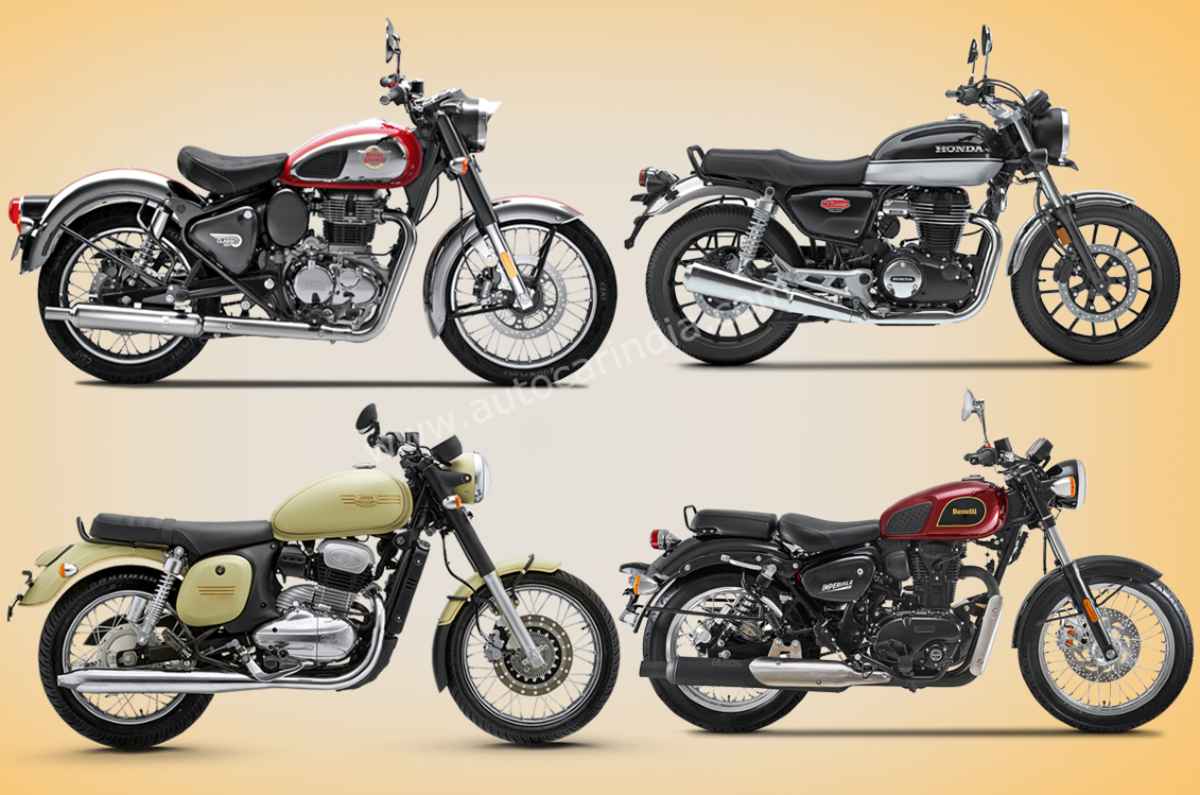 Royal Enfield recently launched its 2021 Classic 350 in India. When compared to the model it replaces, it’s completely new and has a starting price of Rs 1.84 lakh.

With competition heating up and taking things to the next level, it was only a matter of time before the segment leader went through a massive overhaul in order to stay in the game. Here’s how the Royal Enfield Classic 350 fares on paper against its direct competitors.

Like the Meteor 350, the new Classic uses the company’s ‘J platform’, SOHC, 349cc, single-cylinder engine that produces 20.2hp at 6,100rpm and 27Nm at 4,000rpm. While the engine continues to be air-cooled, Royal Enfield has incorporated an oil circuit in the 2-valve head to aid cooling. The engine also has a balancer shaft to make it run smoother.

The Jawa Forty Two takes a very different approach to its powertrain. Despite having the smallest engine at 293cc, it makes the highest power figure at 27.3hp. Torque, however, is slightly lower than its rivals, at 27Nm. The Jawa manages this because it uses a short-stroke architecture and features more modern technology like DOHC and liquid cooling. Additionally, it’s also the only bike here that uses a 6-speed gearbox.

The new Classic 350 uses a double-downtube frame in place of the single-cradle frame. That’s not all, the bike also comes equipped with new suspension components and upgraded brakes. Aside from the base variant, every other Classic 350 model features a rear disc brake. The Jawa is the only other bike on this list that has rear discs as an option.

The Honda, Benelli and Jawa also use double-downtube frames, with a conventional telescopic fork and twin shock absorbers handling suspension, like the RE. Another similarity between the Honda, Benelli and Royal Enfield comes in the form of the 19-inch front/18-inch rear wheel configuration, while the Jawa runs 18-inchers on the front and 17-inch wheels at the rear.

At a hefty 195kg, the new Classic 350 continues to weigh around the same as the outgoing model. For comparison, the CB350 and Forty Two weigh 181kg and 172kg, respectively. The Imperiale 400, meanwhile, is the heaviest, at 205kg.

The Royal Enfield Classic 350 finally gets a fuel gauge. It has been highly-awaited and comes along with an odometer and two trip meter readouts on a new LCD that sits below the analogue speedometer. While the LCD is available across the range, the top-spec Classic Chrome variant can also be equipped with a TFT display called Tripper navigation. It showcases turn-by-turn navigation using Google Maps data when connected to the Royal Enfield app on your smartphone. It will also be available as an MIY accessory for the lower models in the coming months.

The Japanese motorcycle takes it a step further. It gets Honda Selectable Torque Control (HSTC) and Honda Smartphone Voice Control (HSVC) systems. The HSTC is a traction control system that detects the difference between front and rear wheel speeds, calculates the slip ratio and adjusts engine torque via fuel injection. HSTC can be turned on or off using a switch on the left side of the meter.

The HSVC feature (only available on the DLX Pro variant) has been developed in-house and allows the rider to pair his smartphone to the console via the HSVC app. Once connected, the rider can operate the system to access phone calls, navigation, music playback and incoming messages. Like the Royal Enfield, it has a digital fuel gauge.

On the other hand, the Benelli uses a twin-pod layout that features a large RPM gauge (it’s the only one here to get a rev counter) and speedometer, along with a small digital display for the odometer; it also features a fuel gauge. The Jawa, on the other hand, uses a single-pod unit that displays the speed and fuel gauge. Its cluster also has a small digital screen for the odometer.

What is quite clear is that the new Classic 350 is a massive step up over the model it replaces. It has major improvements to the engine, frame, suspension, brakes and features.