When it launched nearly 13 years ago, the Access 125 was one of Suzuki’s early products in our market as a stand-alone company and has since gone on to become its most popular one. The monthly sales reports indicate that the Access almost always accounts for over a third of the manufacturer’s two-wheeler sales. 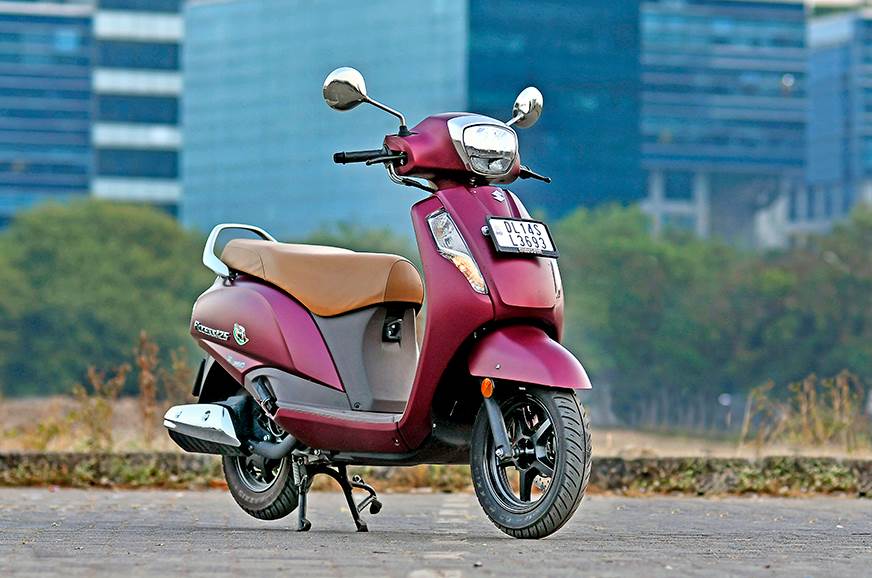 Changing with the times

Most notably, the engine. Even though it still uses a 124cc, single-cylinder engine and the bore x stroke values are the same as well, at 52.5 x 57.4 mm, the stricter emission norms that it will soon have to comply with have resulted in the switch from the use of carburettor to fuel injection. How has this affected its performance? Peak power output remains identical, at 8.7hp, but now comes in 250rpm earlier in the rev band, at 6,750rpm. The peak torque, meanwhile, has reduced minimally, from 10.2Nm to 10Nm. In action, the new Access feels just as compliant as before while also sounding smoother and more refined. There is an initial surge of performance that climbs linearly until around the 65kph mark on the speedo, after which, it flattens out noticeably. Despite this and an additional 2kg increase in weight, the Access is still quick, outpacing the new Activa 125 by over 7sec in a sprint to 80kph. 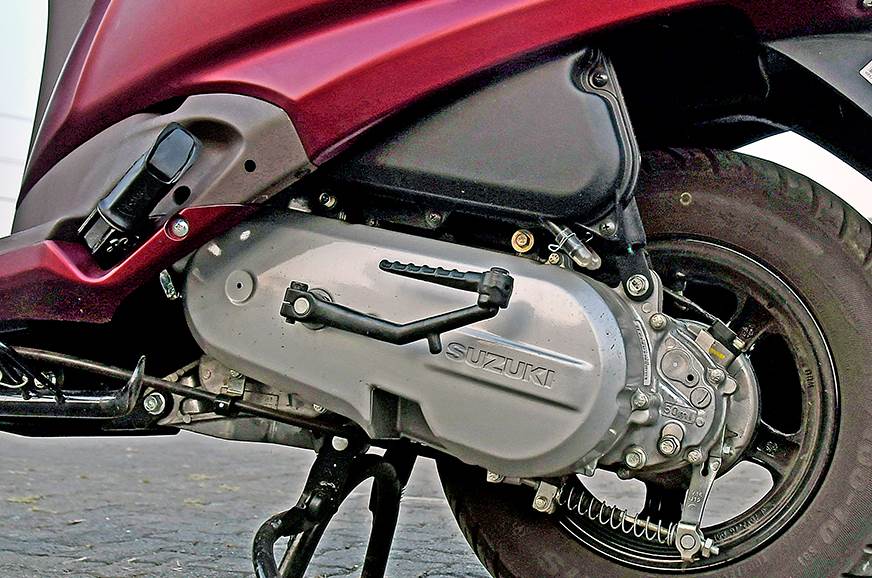 Suzuki has used the opportunity to also equip the scooter with a few additional features. For starters, the fuel filler has moved out of the underseat storage and onto the rear of the scooter. But it can’t be operated remotely and requires you to manually open it with the key, partially defeating the purpose of having it there in the first place. At the very least, it will maintain the confidentiality of the contents of your underseat space. It would have also been a lot easier if the cap clicked itself into place and didn’t have to be locked back. 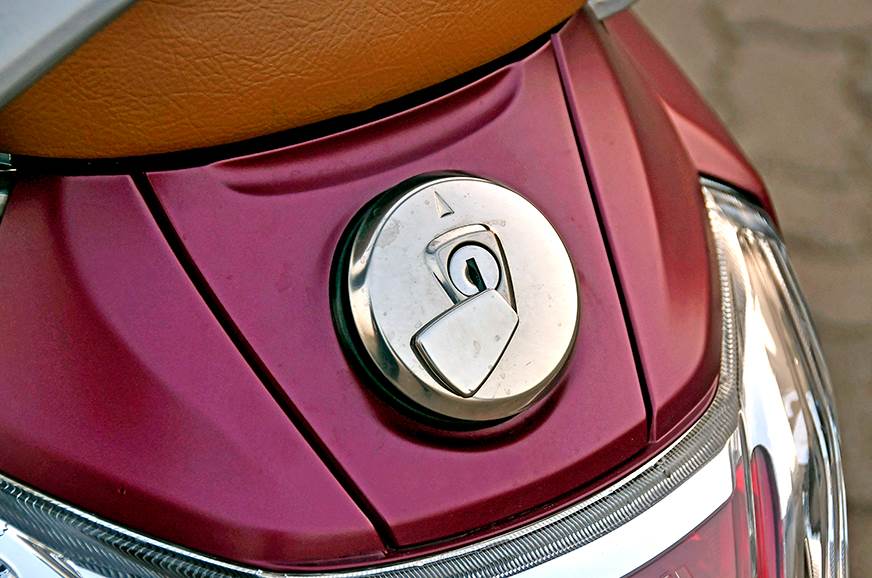 Changes have also been made to the instrument console. Though, the layout remains the same, the small digital section now displays battery voltage level and indicates when a service is due. A more noticeable change is the addition of what Suzuki calls ‘Eco Assist Lights’ (not available on the steel wheel, drum brake variant)  that go from green to light blue to very blue – green being the most fuel efficient – depending on throttle input. They’re an interesting addition, but they come across as tacky, especially because of how much they contrast with all the other relatively subtle colour schemes and textures the scooter uses. Speaking of lights, the headlight is now powered by an LED, but it illuminates only just as much (and as well) as the previous halogen-powered unit. Also new is an easy-start system – technology from the bigger Suzukis that we’re slowly starting to see across their model range – which essentially required you to press the ignition switch only once, with the scooter cranking itself and taking care of the rest. Lastly, Suzuki reduced the fuel tank size by 0.6 litres, but only so we could benefit from more underseat storage space – 21.8 litres of which make it the largest of any 100-125cc scooter in India. The seat and footboard have been extended on this iteration as well, and the latter, again, is the largest of any 100-125cc scooter here! The Access 125 Special Edition also gets a USB charging port as standard. 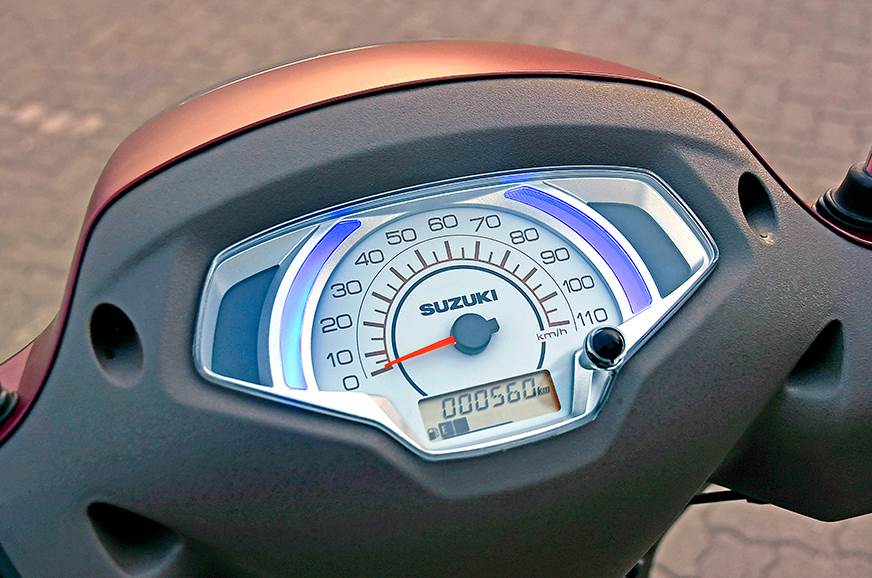 The features list on the new Access isn’t as technologically impressive as the one the new Activa 125 gets, and misses out on a side-stand indicator, engine inhibitor, start-stop system and a more complex instrument cluster. However, its updates do aid the practicality of the scooter to a greater extent.

What stays the same? Nearly everything else. If not for the changes to the headlight or external fuel filler cap, you’d be hard-pressed to differentiate between this new Access 125 and the older model. Just like with the outgoing BS4 model, the SE you see in these images gets matte-finish paint with a contrasting beige seat, chrome bezels and round chrome mirrors – as opposed to the conventional black plastic ones on the regular Access. Black alloys, too, are standard only with the Special Edition. Overall, the Access looks quite conventional and is among the least dramatic scooters in the 125cc space.

The suspension and brakes continue to be the same as well. Over potholes and consistently bad patches of tarmac, the Access’ ride is very impressive. It’s also quite relaxed, ergonomically and in terms of the riding experience. At speed, we also found it to be more stable than the Activa 125. 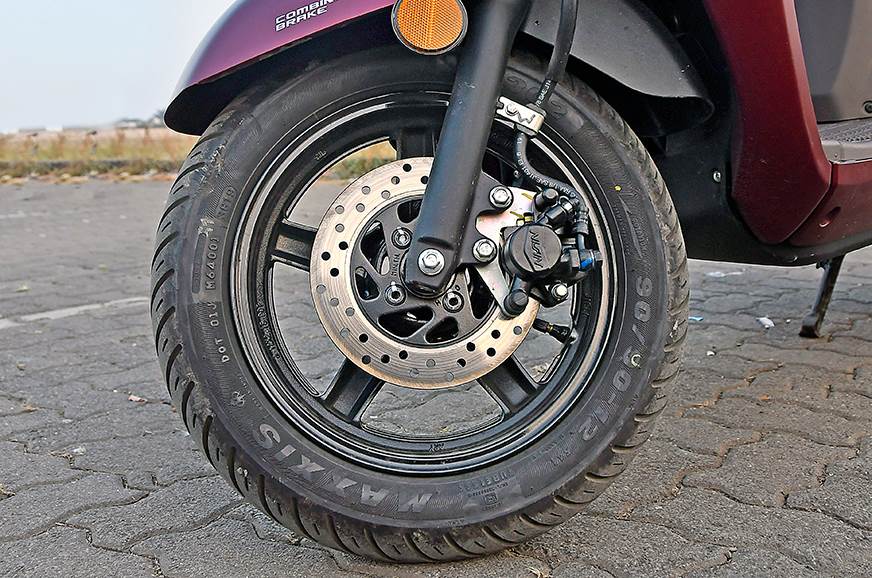 The 2020  Suzuki Access 125 continues to be all it has been, in addition to offering a few more features and being “greener”. Suzuki could have equipped it with more tech, but that would prove to be difficult, especially at the current price point. It is priced on par with the Yamaha Fascino 125 that has a scantier features list and is a whole Rs 5,000 more affordable than the top-spec Activa 125. This special-edition, disc brake and alloy wheel-equipped version costs Rs 6,000 more than the BS4 version in the same spec and that’s one of the lowest hikes we’ve witnessed on a BS6 model yet. The Suzuki Access has always offered a little bit of everything you’d want from a scooter, and this new one continues to do just that.